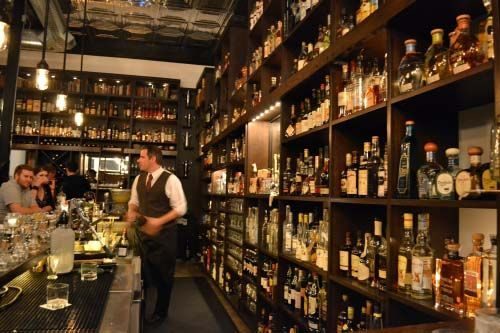 Jamie Boudreau finally gets to eat his cake.

A Canadian who escaped a far more sober life as a would-be physiotherapist, he has established himself as one of the Northwest’s most respected bartenders, with stints at Tini Bigs, Vessel (now defunct), his own cocktail show on the Small Screen Network, and a standing reputation as one of the world’s great molecular mixologists. All this, it seems, has been leading to this moment: the imminent opening of his own bar.

Canon: Whiskey and Bitters Emporium, housed in the recently shuttered Licorous digs on Capitol Hill, is the creation of a guy who dreams as big as a 9-year-old who doesn’t know any better, and has finally found the right space and the right investor who has said “go for it.” 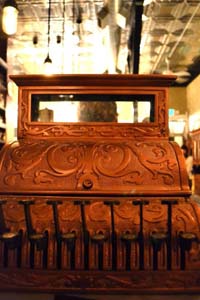 “Basically I found a like-minded spirit who was willing to meet my conditions,” Boudreau said at a pre-opening party Tuesday night. He was referring to Andrew Fawcett, who helped open Scott Carsberg’s Bisato in Belltown, and whom he initially connected with on Twitter. The conditions Boudreau speaks of can lean toward the eccentric—he insists on doing things without a POS system or computer and will only be giving hand-written checks—but without them, we would not be about to receive the temple to the liquor gods that we are.

Let’s start with the cocktail menu: 100+ unique drinks, printed in hard-bound books as an homage to Harry Johnson’s Bartenders’ Manual, Boudreau’s favorite classic cocktail bible, the pages of which literally wallpaper the entire vertical surface of the bar. (Original copies of the book apparently can go for upwards of $1,000 on eBay.) About 90 percent of the menu will be classic cocktails and the rest will be more creative. A weekly “bookmark” insert will present a rotating list of ever-changing specials. 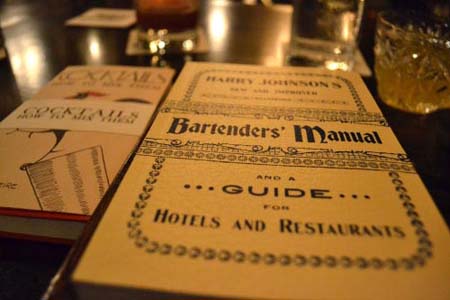 A single row of the sprawling floor-to-ceiling shelving, preserved from the Licorous days, is dedicated to liquor bottles of at least 100 years in age. “Will they ever be poured?,” I asked Fawcett. “Maybe if you catch us in the right mood,” he replied.

Table service in the 40-seat space will include not only tableside punch bowl offerings, which Boudreau says he has found a legal way to do, but there will be also be “personal cocktails” served in flasks emblazoned with the Canon logo.

As for food, Boudreau has hired Melinda Bradley, a young chef he praises for her experience at Marcus Samuelsson’s Aquavit and Daniel Boulud’s Bar Boulud in New York City. He refuses to slap a style label onto the food other than “sharable,” and the menu lineup wasn’t yet available. All I can tell you about are the pork belly sliders, which had a knockout soy glaze and delicate steamed bun that made it nearly a humbow, had the bun gone all the way around. The signature cocktail we sampled was as weighty as the bar’s full name: it included cognac, whisky, vermouth and a cassis foam stenciled—yes, stenciled—with the Canon logo. 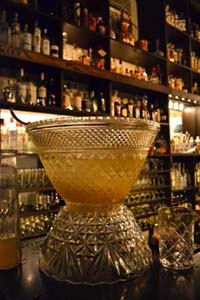 If at any moment should you desire a menu, you can find one in its permanent home: a slot on the underside of your table. And Boudreau is evidently putting his collection of old tobacco tins to use, repurposing them as billfolds for returning your change.

If all of this might seem a little gimmicky, I would argue that it’s not. It’s born out of a genuine reverence for timelessness, and what Boudreau says is his dream of capturing the combined feel of the classic bars of New York and New Orleans. “It’s that lived-in feeling,” he says, “like you’ve been doing this job forever.”