Street food comes in from the cold on Capitol Hill 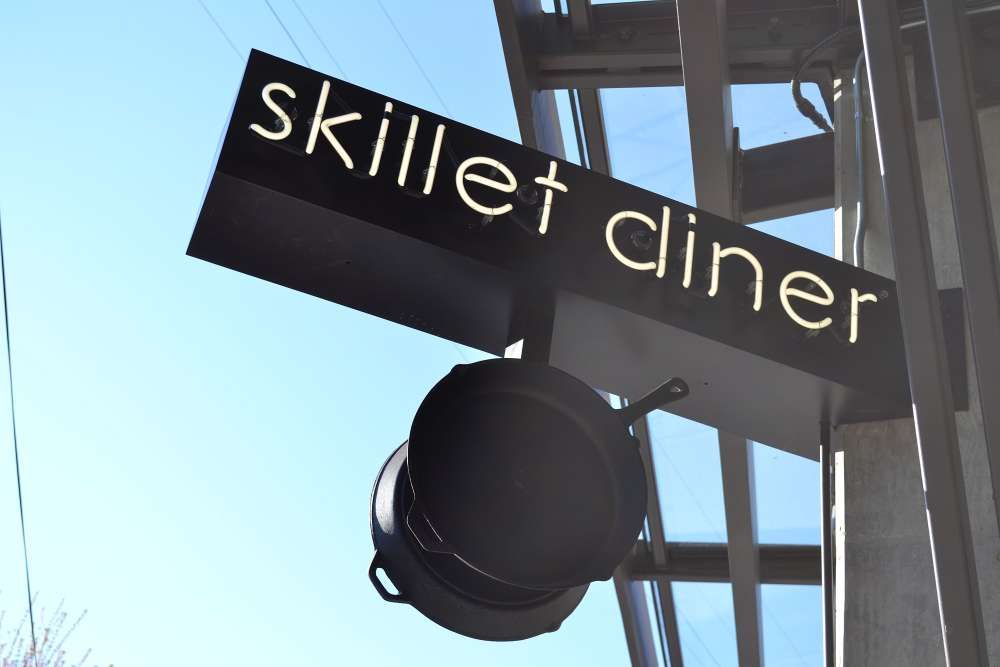 Joshua Henderson opened Skillet, his mobile street food truck, in 2007 after figuring out that he didn’t like working in restaurants. He just wanted to focus on the food: making it good and bringing it to the masses without all the fuss and ritual of creating an “experience.” Now, four years later, after amassing a rabid following for his brand of rib-sticking comfort fare served out of a shiny Airstream beacon of deliciousness, he has realized his dream of… opening a restaurant.

“I wanted to get away from bricks and mortar,” Henderson told me yesterday at a preview for Skillet Diner. “But yeah, I went back to it.” Why the change of heart? “The trailer is strictly food and asphalt,” he says. He thinks food tastes better when you eat it outside, which is great in the summer. But waiting in the cold to get a burger smothered in his famous bacon jam during the winter is a little more challenging. Plus, he says, a restaurant can’t have an engine breakdown.

Not being confined to cooking in a box allows for more creativity and experimentation as well. While the food at the diner doesn’t depart far from the homey and hearty style of the trailer offerings (you can get the bacon jam burger and fabulous poutine here, too), there’s a lot more: salads, including a fantastically textured kale caesar ($7); and sandwiches like “the ultimate grilled cheese” with brie, cheddar and American cheeses on brioche ($9), or grilled peanut butter and jelly with optional bananas ($5 and $7, respectively). Hearty dinner entrees include the likes of chicken pot pie with braised free-range chicken ($12); mad hatcher rabbit with fava bean ragout, corona beans, fine herbs, citrus and picholine olives ($18); and a lighter roasted ling cod with sauteed pea vines, leeks, sweet 100 tomatoes, golden beet pearls and fingerling potatoes ($19). The liquor license was approved yesterday just in time for us to wash it all down with a nice Chuckanut Pilsner, one of several beers (and wine!) served on tap.

The very moustachioed executive chef, general manager and self-proclaimed “breakfast guy” Brian O’Connor (yes, he’s the rare personality who flourishes as both, delivering one quotable zinger after another in between gorgeously-presented plates of grub), could hardly contain his enthusiasm for serving brunch all day every day, until midnight on weekdays and 2 a.m. on weekends (or until all the hungry people have been fed). We had a taste of the maple braised pork belly and cornmeal waffle with a fried egg on top ($13). Next time my heart is already set on the skillet scramble: roasted cauliflower, lemon thyme, goat cheese, brioche and baby greens ($9). O’Connor seems to be a perfect fit for what Henderson is trying to do: give people an indoor venue as unpretentious as his trailer where they can enjoy his food. “I’ve done enough fine dining,” says O’Connor, who helped open Blueacre Seafood and The Swinery. “The food I really love is down-home, simple and excellently-prepared.” And the corner space at 14th and Union reflects that: an L-shape of low booths and banquettes that make it easy to ogle your neighbor’s plate or join in his conversation, a long row of counter seats, truly diner style, that look onto the open kitchen, and the real star: floor-to-ceiling windows that let the light gush into the room. It’s not quite like being outside, but it’s as close as you want to be—and despite what Henderson might think, the food tastes just as good.