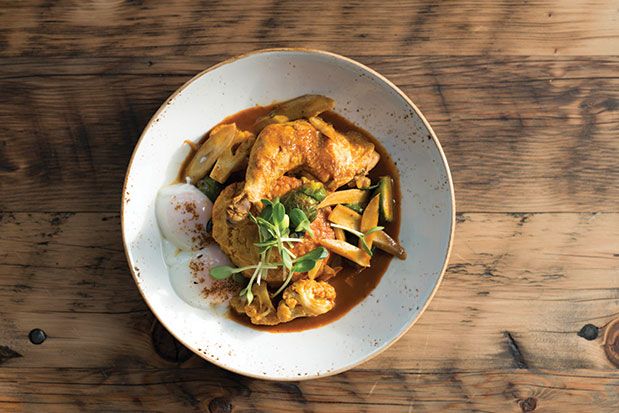 The modest, 600-square-foot SoDo restaurant, which tied with Capitol Hill’s Mamnoon for our 2013 Best New Restaurant, was home to some pretty eclectic, inexpensive food and fantastically off-the-wall beers.The duo closed Gastropod to focus on opening Mollusk, a massive, and more traditional, industrial-style gastropub on the northwest border of South Lake Union on Dexter Avenue. Most of the 5,000-square-foot restaurant, which anchors an apartment building, is devoted to the state-of-the-art brewery, which allows Morris to create more mainstream beers in addition to his experimental, farmhouse-style brews. Beer geeks, take comfort: The sour ale Partytime!!! is still on tap, and the mushroom beer is coming back, too.

According to Kukull, Mollusk is simply a bigger and better Gastropod—more seats and more beers on tap—located in a central, burgeoning neighborhood. The restaurant’s name has a double meaning, by the way: It refers to the seafood-centric menu, but is also a nod to alt-rock band Ween’s album Mollusk, which was always on heavy rotation at Gastropod. At Gastropod, Kukull’s creative cuisine didn’t cling to a specific genre.

At Mollusk, his focus is Near East and Southeast Asian cuisine. While some of Kukull’s amazing, inventive flavors are still there in some dishes—his Nutella-based Malawi chicken wings ($9) spiked with yuzu are stellar—in others they are missing. Laotian lemongrass wild mushroom curry ($19) lacks richness and funk. Giant grilled squid ($15) is stuffed with so much nasi goreng the squid ink butter and Chinese sausage bits listed in the description are lost on the palate. It’s a one-note dish, and that note is starch. The popular Gastropod okonomiyaki (Japanese egg and veggie pancake) is now a bulky waffle topped with eel or octopus and bonito flakes. It, too, lacked flavor and is more bread than shredded seasonal veggies (all for a whopping $25). Kukull says the waffle is a work in progress. I suppose the restaurant is, too.