Sound Transit's finances are prompting a lot of head scratching 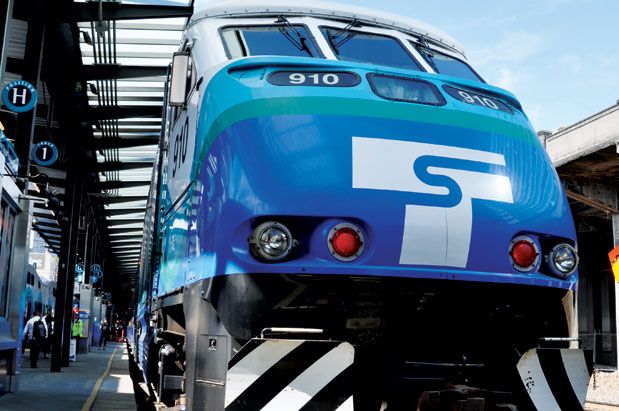 The autumn nip in the air means one thing—rain is coming. After a hot, dry summer, the shifting forecasts will provoke some grumbles, perhaps nowhere more audible than in Everett, where mudslides canceled 122 trips on Sound Transit’s Sounder north line last winter. For critics of the regional transportation authority (which operates rail and bus service in three central Puget Sound counties), in general, and Sounder, in particular, the seasonal pileups of mud, rocks and debris on the tracks seem like an apt metaphor.

One day, Sounder may be part of an integrated transit system that moves hundreds of thousands of commuters at a reasonable cost and a faster pace than on congested roads. But, so far, the 34-mile Sounder north line, which links Seattle to Everett, is costing much more and being used far less than anybody expected. It was originally proposed as a six-train commuter service, on the existing Burlington Northern Santa Fe (BNSF) Railway tracks, with six stops. But as costs shot up to $368 million from a projected $132 million, the agency cut back to four trains and four stations. About 1,100 riders use the line every weekday, far below the original forecast of 2,400–3,200 riders, for an average cost of $330,000 per rider.

And here’s the kicker: Even after paying all that money up front, it still costs Sound Transit six times more to carry a rider from Everett to Seattle by train than by express bus, and the train doesn’t even stop anywhere in North Seattle, the area most likely to find ridership. Critics say that the line violates state law that allows commuter rail when its “costs per mile, including costs of trackage, equipment, maintenance, operations, and administration, are equal to or less than a bus following a parallel route.”

By contrast, the Sounder south route, from Seattle to Tacoma, cost $55,000 per average weekday rider. That’s relatively cheap. Minneapolis–St. Paul paid about $135,000 per rider for its new commuter line.

To be sure, unforeseen circumstances, including the recent recession, have contributed to reduced ridership and lower revenues, but poor negotiations are also part of the problem. Sound Transit originally estimated it would have to pay $65 million to use BNSF’s right-of-way for the Seattle-Everett route. The agency ended up paying $258 million for those rights.

The agency also may have chosen an unnecessarily expensive technology for its rail system. The Sounder north line uses locomotives and coaches instead of a cheaper alternative called diesel multiple units (DMUs), which are essentially rail coaches with truck engines underneath the floor. Used by at least eight transit systems in the United States and Canada, DMUs are more economical because they consume less fuel and require fewer crew members. Tri-Rail, Miami’s commuter rail provider, which runs both DMU and conventional trains, has found that DMUs travel almost a mile on a gallon of fuel, while locomotives pulling a similar number of seats go less than half a mile per gallon.

In June 2010, as Sound Transit was weighing new equipment purchases, an Ohio DMU manufacturer, US Railcar, offered its product for the north line, whose four locomotives and 12 coaches could then have been moved to the Sounder south line. The agency rejected the approach, choosing instead to acquire three more locomotives for the south line at roughly $5 million each. Sound Transit says the DMUs would be harder to maintain.

The Citizen Oversight Panel (COP), an independent, 15-member panel of citizen volunteers appointed by Sound Transit, cautioned in a 2012 report with regard to the north line that the agency “may have to come to terms with a reality that one of its services is not living up to a reasonable definition of viability.”

But asked if Sound Transit might shut down the costly line, CEO Joni Earl responded, “At this stage, absolutely not.” Earl says the Sounder north line is “a long-term investment” and notes that the citizens of Snohomish County still seem to want the line. Sound Transit says it is boosting marketing efforts and working with transit partners and local jurisdictions to increase ridership and lower the cost per rider.

Many of Sound Transit’s problems can be traced back to the rosy outlook of the earlier administration that put together the 1996 Sound Move proposal. That proposal, which included the light rail system and 81 miles of commuter rail as well as other transit improvements, estimated the cost at $3.9 billion. But as Sounder and light rail expenses climbed, construction was delayed, and inflation cut purchasing power, it quickly became clear that Sound Transit had vastly underestimated the price tag for the system.

Observers say Sound Transit has improved its operations since Earl took over as CEO in 2001. “I think she turned the agency around,” says Bruce Agnew, a former COP member and current director of the Cascadia Center for Regional Development, a transportation think tank.

“We’re always trying to find ways to do things more economically,” Earl says. “The old Sound Transit was ‘overpromise and underdeliver.’ Ours is ‘underpromise and overdeliver.’” She pointed to the current Westlake-to–Husky Stadium light rail extension, which in April was running $107 million under budget and was five and a half months ahead of schedule.

A big test of Earl’s administration will be her execution of the Sound Transit 2 proposal passed by voters in 2008 as a sort of sequel to Sound Move. It calls for spending $11.8 billion to build 36 more miles of light rail, extending the system to the east as far as Overlake, about a mile and a half from the Microsoft campus, to the north as far as Lynnwood and to the south close to Federal Way—for 55 miles of light rail.

Already, the agency has chosen not to build the 2.3 miles of new track that would have extended light rail to the south near Federal Way—due to revenue shortfalls. Virtually all of Sound Transit’s funding comes from sales taxes collected in five subareas. Although all regions have seen tax revenues plunge, South King County was particularly hard hit with a 40.7 percent decline in sales taxes. As a result of the shorter line, Sound Transit has reduced its 2030 weekday ridership target to 280,000, from its original of 286,000. That number, if achieved, still represents an impressive tenfold increase in ridership compared to today.

The agency continues to be bound by costly decisions made in the past. Sound Transit’s 2013 budget, for example, includes $10.2 million toward an $18.3 million plan to build a second Sounder platform in Mukilteo. The plan includes $9 million to build a pedestrian overpass with two elevator towers for crossing the tracks. At present, the trains use track crossovers to stop at a single platform for the 44 riders getting on or off each train on an average weekday. Sound Transit spokesperson Geoff Patrick says the agency is required to build the expensive two-platform station as part of its original right-of-way deal with BNSF.

But some costs still seem unnecessarily high. The 2013 budget features $15.1 million toward a $46 million replacement of the temporary Tukwila Sounder station. This includes $3 million for oversight of contractors and $11 million for real estate—$8.37 million of which will primarily cover parking.

University of Washington professor of civil and environmental engineering Scott Rutherford, who sat on a Sound Transit–appointed expert panel that reviewed Sound Move before it went on the ballot, says regional geography explains some the agency’s big bills. “It’s a hard place to build anything, that’s for sure,” he says, referring to the region’s wasp-waisted geography. “It’s not like Dallas, where they just build another ring road.”

But Rutherford says another factor is the Puget Sound process. “I tell people who come here from out of town that the neighborhood is the highest form of government here,” he says. Sound Transit policy, for example, guarantees services and projects to each of the five subareas in its taxing district “generally in proportion to the level of revenues each subarea generates.” That policy, dating from the 1996 Sound Move initiative, helped snare votes from outlying areas with fewer transit needs. But, in the words of Martin Duke, editor-in-chief of the Seattle Transit blog, it has also obliged Sound Transit to “spend like crazy in outlying areas to offset the huge capital costs in the core.”

Rail critic John Niles says the mandate “was certainly a factor in excessive capital on some projects,” including the heavy costs spent on the Sounder north line project.

“Serving the destinations that our board and community members felt represented the highest priorities has required using more costly configurations to a greater extent than many regions,” concedes Sound Transit’s Patrick. Earl says she recognizes the problem and has tried to control it. Scope creep—the demands of local jurisdictions, unexpected environmental mitigations and the like—constitutes “one of our biggest challenges,” she says.  Her policy on local jurisdictions seeking project add-ons: “If you want extras after the initial scoping, you pay for it,” she says.

Still, she says, the subarea equity policy helps win support for public transit from local jurisdictions “because they know that…the money they’re spending is coming to help build transit in their geographical area.”

Few question the importance of rail as a critical part of the area’s transit options. The Puget Sound region will continue to see dramatic population growth, and at a certain point, rail may be the only effective means of transporting people through the region’s narrow corridors. And as expensive as rail is, going forward, it will still be cheaper than adding new roads. For example, the Sprinter light rail system near San Diego cost $22 million a mile, but a nearby freeway that opened around the same time cost $84 million a mile while swallowing up more land and promising greater carbon emissions.

And the good news about rail is its great networking effects. Rail systems typically increase their ridership disproportionately as new extensions are built. So, while the early lines may have less ridership than expected, once the main lines are built and the transit system is properly connected, there’s a good chance the rail lines will have heavier traffic than expected.

Demographic changes also support an increased reliance on rail. Federal Railroad Administration chief Joseph Szabo noted recently that, between 2001 and 2009, young people reduced driving by 23 percent. Many of those young nondrivers are showing up at train stations, glued to the mobile devices they find essential or simply more fun than a steering wheel. They may look like unlikely saviors, but it is precisely those who are shunning the automobile who may make Sound Transit’s return on investment a matter not for skepticism, but for celebration.