These are what comfort foods are made of 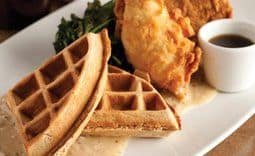 Best Northwest Spin on Chicken and Waffles
Taste, Seattle Art Museum’s in-house restaurant, serves up the most wonderful fried chicken and waffles ($14) for Sunday brunch, made with Olympia’s Stokesberry Farm chicken. A buttermilk-brined thigh and drumstick are served on a crisp and hearty Bluebird Grains waffle. The pile of vinegary mustard greens served alongside is the ideal bracing accompaniment to all this fried goodness.

Best Shrimp ’n Grits
Hudson in Georgetown is known for its rib-stickin’ Southern fare, and one of the best dishes on the brunch menu is the kicky Shrimp ’n Grits ($9.75). Heavily peppered, bespeckled with onions, plump full of shrimp and covered with reddish-brown gravy, this hearty plate, which also includes two eggs and toast, will leave you full for hours.

Best Chicken-fried Steak
The Bay Café in Magnolia is a known for its large portions, gorgeous views of the water and sweet service from silver-haired waitresses. The chicken-fried steak ($10.95) is a trucker-sized portion with rich sausage gravy, three eggs, a hearty helping of some of the best greasy-spoon hash browns anywhere and toast.

Best Steak and Eggs
The Georgian in the Fairmont Hotel is one of the city’s top power-breakfast spots, and no wonder, considering the rarified surroundings. The flat-iron steak, served with two organic eggs and white cheddar hash browns ($19), is not only delicious, but a decent value, considering the enormity of the portion. The well-marbled steak arrives darkly seared on the outside, juicy and petal pink on the inside. Enjoy a morning meal in one of the most ornate rooms in town and drink in the Old World charm as the morning fritters away.

Best Northwest Spin on Biscuits and Gravy
With chef/owner Maria Hines at the helm, media darling Tilth, in Wallingford, has won many awards, and we’re of the opinion that Tilth’s chicken and biscuits ($14) deserve another. After slogging through some 20 versions of biscuits and gravy around the city—most with gravy as thick as wall paste—Hines’ is an oasis. Two cheddar biscuits come topped with smoked, pulled (locally raised) chicken and a flavorful gravy that doesn’t taste like someone accidentally knocked over the flour canister. A hint of preserved lemon adds a bit of much-needed acidity. Two fried eggs on top, and you have a delicious twist on tradition.