A Q&A with sculptor Scott Fife, SIFF is back and a new music round up. 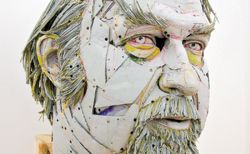 BD: How do you choose your subjects?
SF: It may be a momentary interest or recurring idea. The work is larger than life, messy, direct and stained with the construction process. In choosing a group, there is a unifying theme, a context, from the initial subject. They are a series of iconic, cardboard heads, flawed and fragile, pulled out of time: history, mortality and prolonged immortality.

BD: Why bears?
SF: They are somewhat anthropomorphic, and certainly mythical and symbolic of different powers (the brown bear of the Soviet Union, the panda of China, etc.). The bears, while not vanishing at this time, may soon become a memory of the wilderness, of the West before settlement. There is melancholy to it—a predator that’s almost defenseless. FILM
SIFF City
It’s SIFF season again—time to grab your calendar, computer and calculator and figure out whether it’s humanly possible to see all the films you want to see. (Then start hoping for a loophole in the time/space continuum.)

Highlights from featured Northwest filmmakers include:
The Off Hours, about a restless waitress at a highway diner, by Seattle filmmaker Megan Griffiths. Treatment, about a codependent friendship tainted by Hollywood ambitions, directed by Seattleites Steven Schardt and Sean Nelson (the latter of whom wrote the story).

Also on the bill:
New documentaries from two Academy Award–winning filmmakers >> Tabloid by Errol Morris (who won an Oscar in 2003 for The Fog of War). The new film centers on former beauty queen Joyce McKinney, who may or may not have abducted, imprisoned and attempted to rape a Mormon man in the 1970s. >> Project Nim by James Marsh (who won an Oscar in 2008 for Man on Wire). The new film chronicles a 1970s experiment in which a chimp was taken from its mother and raised as a human. (Hint: The focus is not hilarious high jinks.)

MUSIC
BLUE SCHOLARS: Seattle’s beloved hip-hop duo is finally releasing the much-anticipated new album Cinemetropolis in digital format this month (and as a tangible CD in June). The band used fundraising website Kickstarter to help fund the album; at press time, $33,306 had already been raised, well exceeding the stated goal of $25,000. bluescholars.com

SHABAZZ PALACES: Called Black Up (out May 31 from Sub Pop), the new album by Seattle’s genre-defying avant-rap/spaced-out/trippy-jazz/heavy-bass band continues its habit of inimitable musical innovation. shabazzpalaces.com

DEATH CAB FOR CUTIE: The Bellingham indie rock band made good is back with a new album, Codes and Keys (out May 31 from Atlantic). Ben Gibbard and company will be at Sasquatch over Memorial Day—great news for those who snatched up tickets before it sold out.  deathcabforcutie.com

DAVID BAZAN: Known for his defunct indie band Pedro the Lion, Bazan is now making his name as a solo artist. He’s accompanying his new album, Strange Negotiations (out May 24 from Barsuk Records), with a cross-country “living room” tour—during which fans host intimate shows in their homes. davidbazan.com.