Seven questions for the owner and bar manager 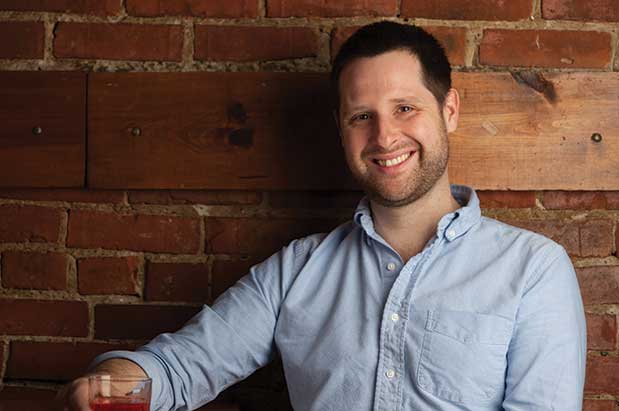 A star in the Seattle bar firmament for a fair amount of time (and named one of Seattle’s happiest happy hour bartenders by this very magazine), Bryn Lumsden is known for incredible drinks and an incredibly good nature. He opened his own bar in Pioneer Square not long ago, Damn the Weather, and it’s already gained accolades and praise. But has anyone every walked in with a poet t-shirt? We found out when talking to him recently.

1. You’ve tended bar at a number of Seattle cocktail havens, including managing the Rob Roy. What’s the biggest difference between all those gigs and owning your own place?

Tending bar is harder than owning one!  Working a service is about making the public happy for ten hours at a time, which, while rewarding, is very hard work.  Owning a bar is more about making a house a home and becoming a family instead of just being co-workers.  It’s the kind of thing that consumes you but doesn’t really feel like work; it just feels like life.

2. Damn The Weather has been open around a year and a half. What’s been your favorite drink to introduce people to in that time?

When tomatoes are in season, Eli (Dahlin, Damn’s chef de cuisine) makes clear tomato water for the bar, which we mix with pisco, and passion fruit.  I think I was in an “orange things go together” phase when this one came out.  Anyway, clear tomato water is amazing. Our best drinks are the ones that come from a dialogue between the bar and the kitchen.

3. Has there been a new favorite drink one of the other bartenders at Damn The Weather has introduced you to recently?

4. Pioneer Square has gone through such a makeover in the last few years. Is there a sort-of bar camaraderie between all the new spots, or more of a friendly rivalry?

Bar camaraderie. Despite there being 20 bars in a three-block radius, there isn’t much stylistic crossover, so it’s more about just enjoying all these places for what they are, new and old alike.

5. As a musician as well as a bartender, do you spend a lot of time thinking of music that’s playing or going to play at the bar?

Absolutely. Volume and music selection are as important as lighting. We started with like a 2,000-song playlist but the staff was sick of it after a week, so keeping that fresh is an ongoing thing. We do have some staples though; Sade and Haim come to mind.

6. I know you also have an English lit background (you’re very well-rounded). Does anyone every come into the bar wanting to talk books, or is that just my dream?

Well, it’s not like folks are wearing Wallace Stevens’ tees, so sometimes it’s hard to tell who wants to rap about that stuff.  Although when someone orders an Amontillado, I find a way to sneak in a Poe anecdote!

7. When you’re not making cocktails, but going out to drink them, where do you like to go, and what’s your regular drink?

Jay Kuenher (bartender) turned me on to the pub in Bainbridge. I’ll have a rum and tonic, or three.

Up Next: Seven Questions for Kathleen Manley