Editorial director Rachel Hart reflects on the bigger picture of our latest issue. 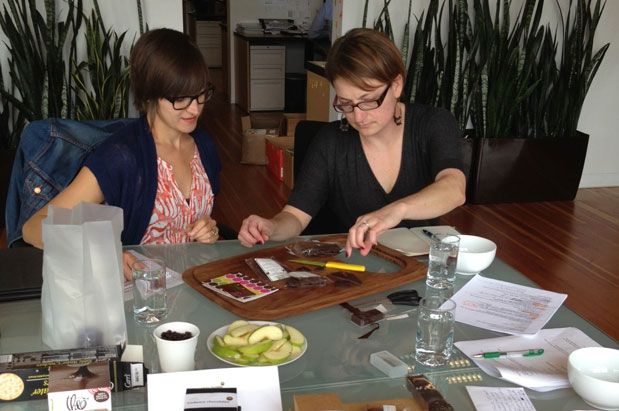 About a year ago, hereditary cholesterol issues started catching up with me and I gave up cheese, after my doctor told me, “It’s like pouring fat directly into your veins.” That pretty much took all the fun out of it (thanks, Marti!), though I still occasionally indulge in a few crackers full of my favorite Mt. Townsend Creamery Seastack cheese.

But chocolate, well, it will have to be pried from my cold, dead hands.

Of course, Seattle is well known for its coffee, beer, Asian food, seafood and Washington wine—but not many people immediately associate the city with chocolate. Yet over the past few years, a booming artisanal chocolate scene has been growing here (adding to what Fran’s started 30 years ago)—and with it, a parade of “adult” candy makers led by crafters of gourmet-flavored parchment-wrapped caramels.

I had always been a milk chocolate girl all the way. Then, along came Theo, the Fremont fair trade, organic chocolate maker, and reports of the health virtues of dark chocolate, and I jumped on board to test those claims on a daily basis. My go-to: Theo’s Organic Fair Trade Ultimate Dark, 85 percent cacao. It’s dark without veering into bitter territory, and rich enough that I can savor half of a rectangular section and actually get a chocolate fix. When I need chocolate in cake form, it’s Hot Cakes molten chocolate cake. Liquid form: I won’t turn away any sipping chocolate offered to me, but I am partial to Vitale’s—mostly because I pass the shop on my way home every day. The only form of chocolate I won’t indulge in is one that ends in “-tini.”

But just when I thought I was a connoisseur, I spent an afternoon with Jess Thomson and Cody Bay (shown above), the authors of our chocolate and candy story, while they tasted dozens of samples. Armed with a sharp knife—and sparkling water and apple slices to cleanse the palate—these ladies were ruthless tasters. You’ll find the crème de la local creamy and dreamy inside our cover story.

I have to admit, though: This return to sugar has me chuckling a bit. I love how “pure sugar” (versus ingredients such as high fructose corn syrup) is being promoted boldly on products as if it’s some sort of super vitamin. The sugar craving reminds me of when lattes first became popular, and all of those adults walking around with their lidded “sippy cups.” We now unwrap crinkly parchment papers, mouths watering in anticipation, looking for that same little piece of portable comfort. Here’s hoping you’ll find something sweet in your near future.

Click here to send a letter to the editor.