Ice-cold beverages to beat the heat 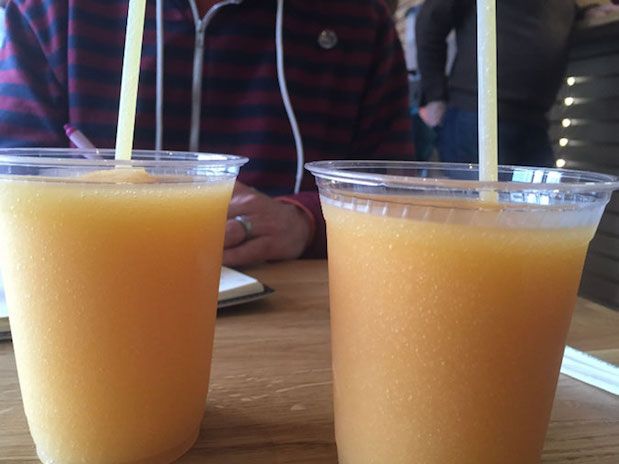 As we head into the hottest part of the year, it’s good to have a few extra-cold drink ideas for when that sun has risen so high and is so hot. To help you stay cool, we’ve picked four ice-cold cocktail remedies at local bars below. They won’t make the mercury go down in the thermometer, but they’ll sure chill you out.

Adult Slushy at Bok a Bok: Opening earlier this summer, this White Center spot is already garnering raves. And if it’s hot, its icy slushies are a perfect remedy. Often being made with shoju, when I was there the slushy’s base was sake, which was mixed in a big ol’ slushy dispenser with an array of tropical fruit juices, including lychee and passion fruit. Brightly colored and brightly flavored, the sluhies are an ideal accompaniment to the Korean fried chicken, spicy chicken or fried tofu sandwich (tip: the 4 Chili Hot Sauce is swell) or another of Bok a Bok’s spicy culinary delights.

The Painkiller at Bait Shop: This Capitol Hill hangout boasts plenty of ’70s Midwest style, and also tends towards lower lighting – a boon when that sunshine is knocking you down. Not as much a boon as its Painkiller, however. Its tropical combination of rum, pineapple, coconut and orange juice, with a bit of nutmeg on top, all cozied up together in a giant square blending machine is sure to take the hotter edges off. Plus, it feels a little (especially if from small town Kansas like me) like you’ve picked up the best drink ever from the local convenience store and spiked it. Fun stuff.

Dark & Stormy Float, Rachel’s Ginger Beer (12th Ave.): While you could also stop in at the Pike Place RGB, I find the Hill sibling a nice airy respite from the hot streets outside. And while it does have blended frozen options, as well as just tall bubbly refreshers featuring the legendary Rachel’s Ginger Beer in various flavors, to truly ice up, go for the Dark & Stormy float, if it’s on offer. I had it with dark rum, Rachel’s original and soft serve ice cream. A luscious treat, this float can transport you from sweltering to arctic tundra dreamland in no time.

Ice-Cold Fashioned at Dino’s Tomato Pie: Want to cool out, but also wanting to stay away from the blended and creamier numbers? Look no further than the Ice-Cold Fashioned at this new-ish favorite pizza stop. It brings bourbon, sugar, and bitters to the party, which might make you think it sounds like a winter drink, but they’re all run through a reclaimed Jägermeister shot chiller. The end result is an extra cold number that still delivers the kick (which may also help with the heat). A glacial charmer, it also matches a hot slice right out of the oven in fine fashion.