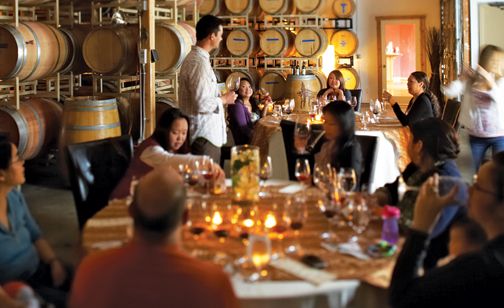 Warehouse District
Covington Cellars
A long, formal table is set just inside this posh tasting room, giving it the air of an upscale restaurant. The food here goes way beyond the typical cheese and crackers: Covington has its own kitchen and a resident chef. Vintner Morgan Lee’s diverse lineup of wines—including a Sangiovese Rosé, a Cabernet Franc and the 2006 late-harvest Sauvignon Blanc—is showcased during after-hours dinners, when the winemaker treats guests to barrel samples of future releases. Small plates are available in the tasting room, too. For $35, visitors can spend an afternoon with the winemaker in the cellar, where wine is stored.
Don’t miss: 2009 Josie Sangiovese Rosé ($15)

Hestia Cellars
A chalkboard behind the tasting bar lists the changing lineup poured at Hestia’s spare tasting room. The winery—whose production facility is in Carnation—is named for the Greek goddess of the hearth. Winemaker Shannon Jones is known for his minimalist approach, which includes bottling wines unfined and unfiltered. Even when it’s busy, the savvy room staff transports tasters by telling the stories behind the winery’s various vineyard sources.
Don’t miss: 2007 Merlot ($20)