In three new novels by local writers, characters struggle with what it means to be a good father. 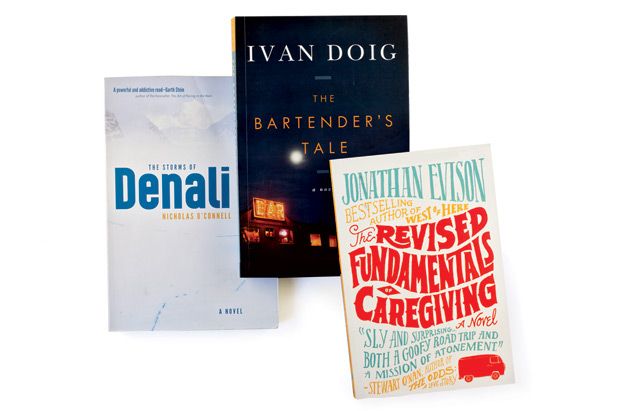 Bainbridge Island-based author Jonathan Evison has an uncanny knack for writing prose that roils across the page, sweeping readers up for the ride. His first novel, All About Lulu (2008), won the Washington State Book Award, and his second, West of Here (2011), earned him the Pacific Northwest Booksellers Award. In his new novel, The Revised Fundamentals of Caregiving ($23.95; Algonquin Books), a former stay-at-home dad who has lost everything he loves embarks on a funny, touching and redemptive road trip across the Northwest with a ragtag crew of troubled souls. —B.D.

Renowned Seattle writer Ivan Doig (Work Song, among many novels) has earned a devoted following for his fictional explorations of a younger, gentler America, often set in his native state of Montana. He returns to this Western outpost with his new book, The Bartender’s Tale ($27.95; Riverhead Books), in which a boy is suddenly reunited with his pompadour-sporting pop, proprietor of a saloon called the Medicine Lodge. Father and son spend all their waking hours at the bar, giving the boy an up-close preview into what adulthood is really like. —B.D.

Seattle mag contributor and mountaineer Nicholas O’Connell’s new novel, The Storms of Denali ($23.95; University of Alaska Press), is a riveting account of a fictional and ill-fated summit attempt. As the treacherous journey goes terribly wrong, one climber, a father, grapples with the painful clash of two internal forces: his responsibility to his family and the allure of his high-stakes hobby. —K.R.