Tom Douglas Sounds Off Against Bristol Bay Pebble Mine 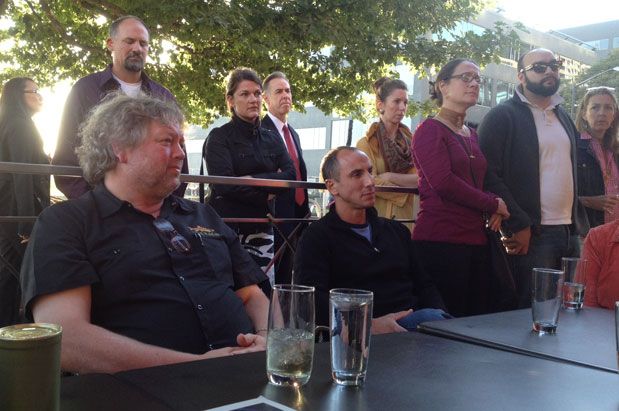 Do you eat wild salmon?

Then, chances are you’ve enjoyed fish from Alaska’s beautiful Bristol Bay, where massive fisheries produce roughly half of the salmon that shows up on plates around the U.S.

That’s one thing I learned when I showed up to a press conference yesterday at Seatown, called to discuss the threat to that habitat by the proposed Pebble Mine project.

Seattle restauratuer Tom Douglas recently got on board with a national effort to call attention to this potential open pit that, under the best circumstances, is still going to have an impact on the environment.

And guess what? I was the lone writer to show up. There were no TV cameras, no mics from the local NPR station. Forgive me for diving into the stinky pool of cynicism, but why isn’t this considered a story worth covering? Because it’s not sexy enough? Because there’s no kitty cat playing on a computer? Maybe if Honey Boo Boo or Snooki came out against Pebble Mine, then maybe it would get some attention?

Or, how about some culinary big shots?  Boston area chef Michael Leviton says he uses his menu as a “bully pulpit” to educate diners about where their food comes from, hoping that fires them up about “Saving Bristol Bay.” Tommy D sounded the alarm in his latest newsletter about the threat to Bristol Bay fish, fishermen and to far-flung economic impact. He writes:

“I believe that we are facing one of the most critical environmental debates of our times–the decision to let Pebble Mine open in the Bristol Bay, Alaska watershed or to preserve one of the last great remaining salmon fisheries on earth. This crucial debate is being framed as we speak by the Obama administration and the EPA. Your house and Senate representatives need to hear from you now. As a local chef, business owner and consumer, I implore you to learn more about this debate, ask questions, form opinions and get active.”

During the press conference, Alaska fisher folks talked about their steadfast opposition to this project moving forward, pointing out that if it’s approved, the jobs it creates will last only 50 years, because the ore they’re mining is not a renewable like the salmon.

We’re talking about destroying an area about the size of Connecticut. Somebody pointed out that Americans wouldn’t stand for Yosemite or Yellowstone being treated this way, so why on Earth would citizens let Pebble Mine move forward? (The permit, by the way, has been applied for by Canadian and British companies, another head-scratching piece of this puzzle.)

This is scary stuff, but not necessarily what people who are busting their humps to pay the bills want to think about in their off-hours. After all, what can the average Jane do to make a difference?

For starters, you could read about it, or watch this Frontline episode and then decide if it’s worth the 15 minutes of Facebook time you’ll have to miss out on to sign an online petition or pick up the phone and call your Congressman. Nobody’s suggesting you save the world. Just a pristine little piece of it.

Oh, and this press conference ended fittingly, with a bunch of brilliant bites of Bristol Bay salmon prepared by the Seatown crew – still thinking of that incredible gravlax and those smashing sliders (shown right) – some tasty reminders of why we should care.