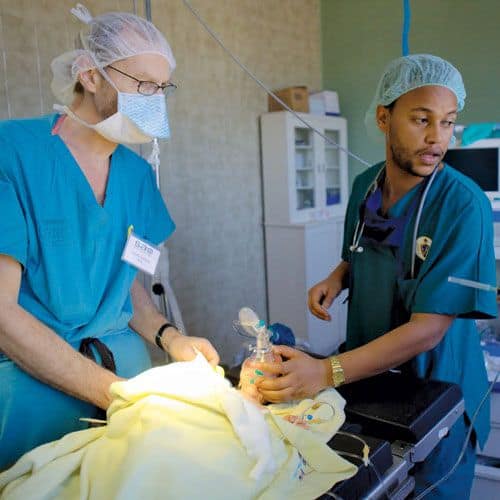 Patients at some of the poorest hospitals in the world are getting relief from their pain—from Seattle doctors. Swedish Medical Center anesthesiologists Mark Cullen and Richard Solazzi were among a group that created Seattle Anesthesia Outreach (SAO) six years ago after spending a week in Ecuador assisting surgeries. Since then, the nonprofit has grown to about 100 volunteers, sponsored a dozen humanitarian missions and is now focusing on Ethiopia, a country with few resources and a life expectancy of age 50.

In February, approximately 28 volunteer doctors, nurses and technicians spent a month at Ethiopia’s largest hospital, Black Lion, in Addis Ababa, installing anesthesia machines and other equipment, and training physicians and staff. “We are taking the soup-to-nuts approach,” Solazzi says. (Cullen, who is the partner of Seattle magazine associate publisher John Spear, recently resigned from SAO because of time constraints.)

Last year, SAO raised $55,000 for its African mission and partnered with Boeing and Ethiopian Airlines to deliver 7 tons of medical equipment to the hospital in a new Boeing 777 commercial jet. The group is now raising money to fund another monthlong mission to Black Lion this fall and hopes to continue to go back to Ethiopia on a regular basis. “The poverty there is beyond anything we can relate to,” Solazzi says. “We want to help this place move into the next century.” K.W.

Doctors Who Blog
A growing number of doctors are harnessing the power of social media to help bridge the gap between office visits. One of the most prolific local doc bloggers, Seattle Children’s pediatrician Dr. Wendy Sue Swanson (at right), writes on Seattle Mama Doc (seattlemamadoc.seattlechildrens.org), where she frequently blogs about child health issues. And she isn’t shy about weighing in on social trends; a recent post was titled “Girls in the News: Beyoncé, Bikinis and Breast Milk Baby [doll].” Some posts aim to provide answers to questions prompted by events in the news, such as Swanson’s explanation of radiation poisoning and why potassium iodide supplements are not necessary in Seattle in the aftermath of the earthquake-related nuclear accident in Japan.

Seattle Polyclinic’s Dr. Linda Pourmassina, an internal medicine physician, also blogs (pulsus.wordpress.com) about medical news of the day—such as new FDA drug approvals—but mixes in musings on everything from movie portrayals of the drug industry (Love and Other Drugs) to big-picture philosophical issues such as doctor-patient relationships. And Swedish Hospital neurologist Dr. Douglas Backous does much the same, one day blogging about cochlear implant surgery; the next, discussing the role of social media in medicine (drbackous.com).

Blogs like these can be a crucial tool, Swanson says, for passing along important information and debunking myths. “We have so little time with our patients,” Swanson says. “We need to find ways to communicate outside the exam rooms.” S.M.