No Oompa Loompas at these candy-making centers, but peeking behind the sugary curtain is a delight. 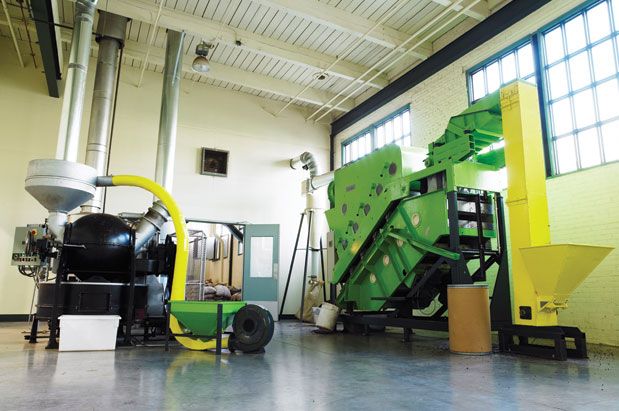 Theo Chocolate
Revamped in 2012, the tour at Fremont’s 6-year-old Theo Chocolate is more educational than Willy Wonka–ish. It starts with a 30-minute seminar that includes not just how chocolate is made, but why Theo set out to change the way cacao is sourced. (The company is part of a fair-trade network that polices the cooperatives that grow and harvest chocolate, guaranteeing that the beans it buys are in no way connected to forced- or child-labor practices. Approximately 70 percent of world chocolate production still doesn’t follow fair trade principles.) Learn when a cacao seed turns into a cocoa bean, how and why you should eat your dark chocolate before your milk, whether there really is that much caffeine in your nightly nosh, and why theobromine, the compound found in chocolate, technically qualifies any chocolate bar that’s more than 70 percent cacao as a health food. When the learning’s done, meander through the factory with one of Theo’s übereducated chocolate lovers—don’t worry, there will be plenty to taste. One-hour-long tours daily; $6 per person (can reserve online). 3400 Phinney Ave. N; 206.632.5100; theochocolate.com

Liberty ORCHARDS/Aplets and Cotlets
Back in the 1930s, after Armen Tertsagian and Mark Balaban, two enterprising young Armenian immigrants, named Liberty Orchards in honor of their new homeland, they created Aplets and Cotlets, a type of locoum (sometimes called Turkish delight), based on favorite Armenian candy recipes. Later, third-generation owner Greg Taylor’s mom was in charge of the tours. She shepherded the area’s tourists through the candy kitchen, showing people simmering cauldrons of candy and thick slabs of sweetness ready to be cubed and dusted in confectioner’s sugar. Not much has changed. Today, approximately 80,000 people visit Liberty Orchards, where they witness the creation of a candy made famous by the Seattle World’s Fair, along with new and nutritious Orchard Bars. Don’t worry; it’s not a health food company. Tours daily (not open weekends during the winter). Free. Cashmere, 117 Mission Ave.; 509.782.4088; libertyorchards.com

Boehms Candies
Part candy factory and part museum, Issaquah’s 70-year-old confectionary is still churning out brittles, fudge and truffles next door to the alpine chapel that founder (and former Olympic runner) Julius Boehm built as a replica of one in St. Moritz, Switzerland, that honors fallen mountaineers. A journey through the neighboring chalet—now part of the guided tour at Boehms—makes you feel caught somewhere between The Sound of Music and “Hansel and Gretel.” The candy-making process itself is equally quaint; the founder insisted that all truffles be dipped by hand, as they still are today. Winter tours by reservation only. Issaquah, 255 NE Gilman Blvd.; 425.392.6652; boehmscandies.com (some gift boxes available online)

!–paging_filter–pChocolate in pill form sounds like a dubious concept–doesn’t that take all the fun out of it? Perhaps, but it may also be the best way to serve up its nutrients for heart health, something Fred Hutchinson researchers are setting out to learn more about. In partnership with Boston’s Brigham Women’s Hospital, they are a…