Chatting with a PCT ‘Trail Angel’

These volunteers are heaven-sent 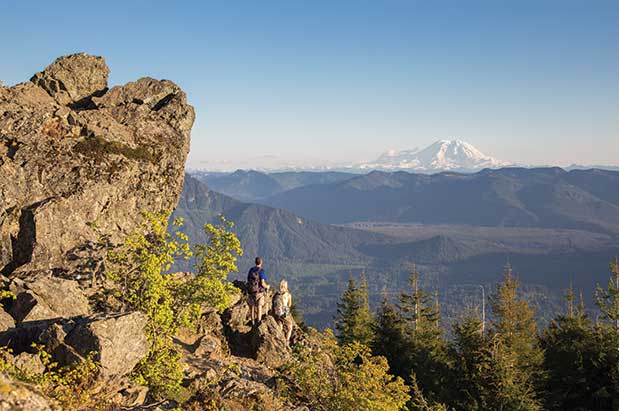 Andrea and Jerry Dinsmore planned to run a tiny truck stop when they retired from their jobs as a truck driver and mechanic, respectively. Instead, they became volunteers, running a “human stop” as trail angels—people who help thru-hikers (those who hike long-distance trails from end to end) with small acts of kindness—welcoming more than 500 PCT hikers a year with a place to sleep and shower (many such volunteers do accept donations for services provided). The Dinsmores, who live near the PCT where it crosses U.S. Highway 2 at Stevens Pass, are among the most famous of the PCT’s dozens of trail angels because of their hospitality, and because theirs is one of the last stops before Canada. Andrea offers insights into her angel of a job.

How did you become trail angels? Back in 2003, Jerry ran across four older guys in Skykomish and brought them home. They looked homeless to me. I started hiding the cash and the beer as soon as they walked in the door. They turned out to be doctors and lawyers hiking the PCT. We let them stay with us and use our shower. They were really nice and told us about the trail. After that, we were on the lookout for others.

How many hikers do you get? Last year, we had 530 hikers stay with us. Most come from July through September. There’s usually 15–20 per night, though one night last year we had 49.

Where do they stay? We have a hiker dorm that sleeps about 12. If there’s more, they have to sleep outside. We also have a laundry room and a shower.

I understand you helped save the life of one thru-hiker. We had a hiker from Japan we called Taka (Takahisa “Taka” Nezu). It was in October at the end of the hiking season, so I insisted he take more food with him. A group of hikers went out together, and then a snowstorm came—and they all came back except Taka. He was a very experienced hiker, but he just wasn’t prepared for the snow. After a few days, I called search and rescue and gave them an idea of where he might be. When they found him, he had only about a half-day’s supply of food left. (The Dinsmores received a “Real Heroes” award from the local Red Cross for their efforts.)

Why do you do it? Most of them are in their 20s. They need a mom and dad to give them advice—that’s why my nickname is “PCT Mom.” We love having them here. They’re like our kids and grandkids. And if you do good, it always comes around back to you. T.G.