Why Seattle's largest park is so unique 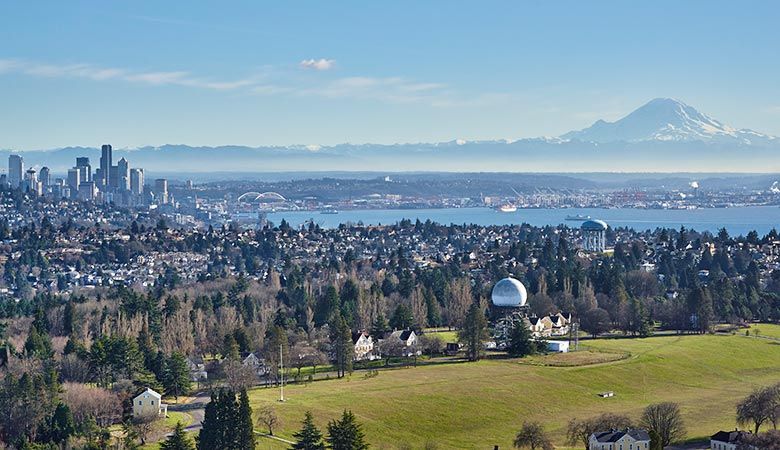 If you live in Seattle, you’ve certainly heard of Discovery Park, and probably visited at some point. But you may not know the history and features that make this 534-acre refuge such a local treasure.

Here are five reasons it’s worth your time to discover Discovery Park. Known as Seattle’s “crown jewel,” Discovery Park’s mission is “to provide an open space of quiet and tranquility away from the stress and activity of the city.” You would never know the park is located just minutes from downtown Seattle, with its picturesque meadows, streams, fields, forest trails and two miles of beaches.

Discovery Park is “separated, but not isolated,” ensuring privacy while providing access to all its amenities. Although it is not a gated community, the close-knit neighbors of only 26 homes are surrounded by natural beauty and protected views, giving park goers and residents a sense of peaceful security. In 1900, the military built the 26 “colonial-revival” homes on Magnolia Bluff for officers and their families. Since then, exquisite renovations with modern systems have made it possible for families of today to move in—all while preserving the houses’ historic character.

In 1971, the Army transferred the land to the city of Seattle to establish a park. Discovery Park was dedicated to the people of Seattle in 1973, and it remains Seattle’s largest public park. Discovery Park is known for its vast system of hiking trails. Discovery Park Loop Trail runs for 2.8 miles and is an official National Recreation Trail. With nine additional miles of walking and bike trails throughout the park, visitors can access miles of shoreline featuring a lighthouse, sea cliffs, sand dunes and stunning views of Puget Sound, Bainbridge Island and the Cascade and Olympic Mountains. Hiking in Discovery Park is an active adventure for families of all ages and four-legged companions alike! Unbeknownst to many nearby city dwellers, Discovery Park is also known as an ideal place to observe birds and marine animals, with Seattle being named the sixth friendliest city for wildlife by National Wildlife Week in 2015. The Seattle Audubon Society recorded a list of 270 bird species seen within the park and around its waters such as Mountain Chickadees, Cliff Swallows and Purple Finches.

5. You can live there The iconic neighborhood of Officer’s Row at Fort Lawton is nestled in the center of Discovery Park. Impressive porches are perfect for taking in the scenic views and serenity while enjoying a morning cup of Joe. The original architecture and integrity of this historic district have been thoughtfully preserved, and the flora and fauna of Discovery Park influenced the color palettes and design of the enviable interiors. The homes range from 4,000 to more than 6,000 square feet and are priced from the low $2 millions.

There are only six homes still for sale, including five Prosch plans with just over 4,000 square feet each, 4 bedrooms and 3.5 baths priced between $2 million and $2.2 million. The final Ellicott plan is 6,278 square feet with 6 bedrooms and 4.5 baths, priced at $3 million.

An opportunity to create a family legacy, anyone interested in owning one of these historic homes on Officer’s Row should visit www.ownfortlawton.com and email info@ownfortlawton.com or call 206-489-3559.