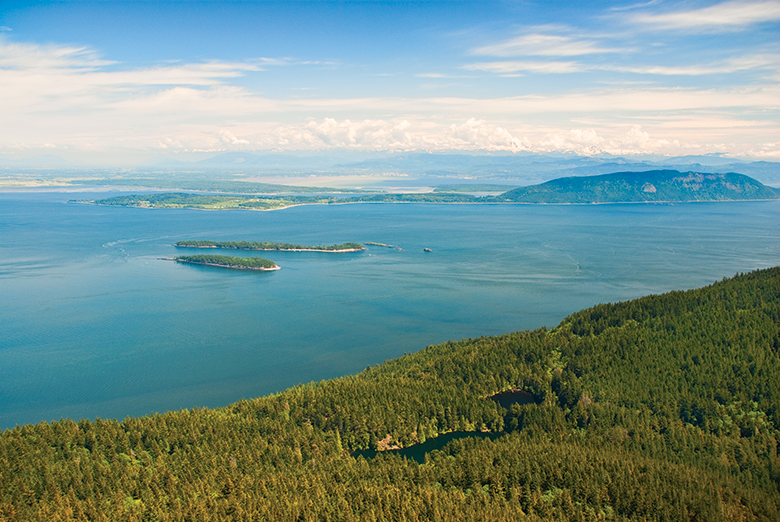 Living in the seattle area, you might be forgiven for taking breathtaking natural beauty for granted. When your daily commute includes views of an iconic (and active) volcano, bald eagles soaring over a glacier-carved lake and a snowcapped Ring of Fire range—well, it’s hard not to become complacent. No need to go looking; western Washington literally rains beauty upon us.

But these daily wonders are just the tip of the glacier. From pristine alpine lakes to towering old-growth forests, from sea stacks to a smoldering caldera and a rare rain forest—it’s all here, within driving distance. Why not hit the road for an epic six-day binge-watching tour of all that beauty?

Day One
Begin with a quintessential Northwest passage: the ferry ride from Anacortes to Orcas Island in the San Juan Islands. The ride itself is a bracing chug past forested islands, tranquil bays and the odd sea otter. Your destination: the highest point in the San Juans, the 2,409-foot Mount Constitution, just a half-hour drive from the ferry dock in Moran State Park. Drive to the top, catching glorious views from pullouts along the way, then climb the steps of the stone observation tower for thrilling 360-degree views of the archipelago; Mount Baker and Mount Rainier; Vancouver, British Columbia; and beyond. Head back into idyllic Eastsound, the island’s small town, for a bite at the cozy Madrona Bar & Grill, then tuck in for the night at the luxe Rosario Resort. The Salish Lodge (a stand-in for the Great Northern Hotel in TV’s Twin Peaks) is perched above spectacular Snoqualmie Falls.

Day Two
Today, trade the calm waters of Puget Sound for something decidedly more turbulent—the thundering drama of Snoqualmie Falls. Begin by riding the ferry back to Anacortes and then make a beeline south and east (Interstate 5 south, U.S. Highway 2 east, State Route 203 south) for a couple of hours to arrive at the 270-foot falls. Gawk awhile from the upper viewing platform, then make the easy .7-mile trundle to the base of the falls, basking in the pounding roar and plentiful mist. Afterward, catch your breath in The Attic, a snug loft bar perched at the very top of Salish Lodge, which is situated right above the falls. A night at the lodge is a little spendy, but you’ll sleep splendidly here within earshot of the falls.

Bonus: Fans of the recently rebooted Twin Peaks television show might want to linger in the area a little longer. The lodge is a stand-in for the show’s Great Northern Hotel. Nearby are other landmarks that appear in the show. Real die-hard fans could even take an entire Twin Peaks–focused mini road trip.

Day Three
Head out early for your two-and-a-half-hour journey around the south end of Puget Sound to the Olympic Peninsula, where more only-in-Washington beauty awaits. You’ll draw an arc on State Route 18 south of Kent, then scoop back upward via state routes 16, 3 and 19 north, soaking up miles of melancholy from seaside towns along the way. Stop for a stretch in Port Townsend, a sweet, strollable town replete with Victorian architecture; grab a bowl of excellent house-made soup at the Silverwater Café.

Drive farther west along U.S. Highway 101 for about 90 minutes to Port Angeles, where you’ll decide whether or not to take a 40-minute detour along Hurricane Ridge Road for dramatic views of the Cascade Range from 5,200 feet. Stop at the ridge’s Visitor Center and gape at the jagged Bailey Range, visible from the south side of the center.

Resume your journey west, arriving at the transcendentally beautiful Lake Crescent after about an hour. Here, snowcapped peaks flank an impossibly pristine-looking lake; Lake Crescent Lodge is nestled along the shore. You’ll spend the night here in one of the cottages (open year-round) or in the lovely main lodge (closed in winter).

Photographs by Mark BellaFoto and Salish Lodge & Spa. From left: Stop for a meal at Silverwater Cafe in Port Townsend; the jaw-dropping scenery at Hurricane Ridge; the crater at Mount St. Helens.

Day Four
Today, you’ll uncover more natural beauty on the Olympic Peninsula. Start with a one-hour drive down the coast to Rialto Beach, just north of La Push, part of our state’s only National Marine Sanctuary. This famously picturesque spot offers glorious views of offshore sea stacks and fantastic tidepools. Hike 2 miles on the rocky beach to its northern boundary for a look at Hole-in-the-Wall, a rock arch carved by sea and wind. You can walk through the hole at low tide; at high tide, take in panoramic views from the overland trail instead.

Follow Hwy. 101 south for another hour and make a stop at beautiful Ruby Beach, a birdwatcher’s heaven (puffins!). Another 10-minute drive farther south, at Kalaloch Lodge, grab crab cakes or a salmon BLT for lunch at the Creekside Restaurant. Afterward, walk a half mile north on the beach to visit the extraordinary “Tree of Life,” an immense Sitka spruce that somehow persists, virtually suspended in midair on a cliffside, despite a root system that’s been fully exposed by erosion.

Head inland along Hwy. 101 for another 40 minutes and park your car for the night at Lake Quinault Lodge, then set out for a walk in the Quinault Rain Forest, one of Olympic National Park’s four temperate rain forest areas (and the only ones in the Western Hemisphere). It’s a lush and broody stroll through a forestscape of ancient old-growth trees, rotting nurse logs, abundant slugs and otherworldly hanging curtains of moss.

Day Five
Dry things out today with a three-and-a-half-hour drive to a notorious blast zone, the crater of Mount St. Helens. Follow Hwy. 101 to I-5 and State Route 504 south, enjoying spectacular, surreal views of the crater and devastation left by the volcano’s 1980 eruption. Stop for the view and a ranger talk at the Johnston Ridge Observatory. From this vantage point, the violence of the eruption and its aftermath are on vivid display. Stay the night at McMenamins Olympic Club Hotel in Centralia, a 90-minute drive that puts you in launching position for the last leg of your journey.

Day Six
End your tour with the granddaddy of all Northwest beauty sights: Mount Rainier. If you’re taking this trip in winter, check road conditions at Paradise (visitrainier.com/roads) before embarking. Head back out SR 504 and connect with State Route 706 east to Paradise, about two and a half hours away. Winding up the last stretch of SR 706, you’ll be treated to magnificent views of the monstrous volcano. Park at Paradise and hike (or snowshoe!) the trails for a stunning, close-up look at Rainier’s Nisqually Glacier and the jagged peaks of the Tatoosh Range. If you’re touring between May and September, refuel at the grab-and-go café inside Paradise Inn (closed October–April) before heading back to Seattle, about a two-hour drive away.