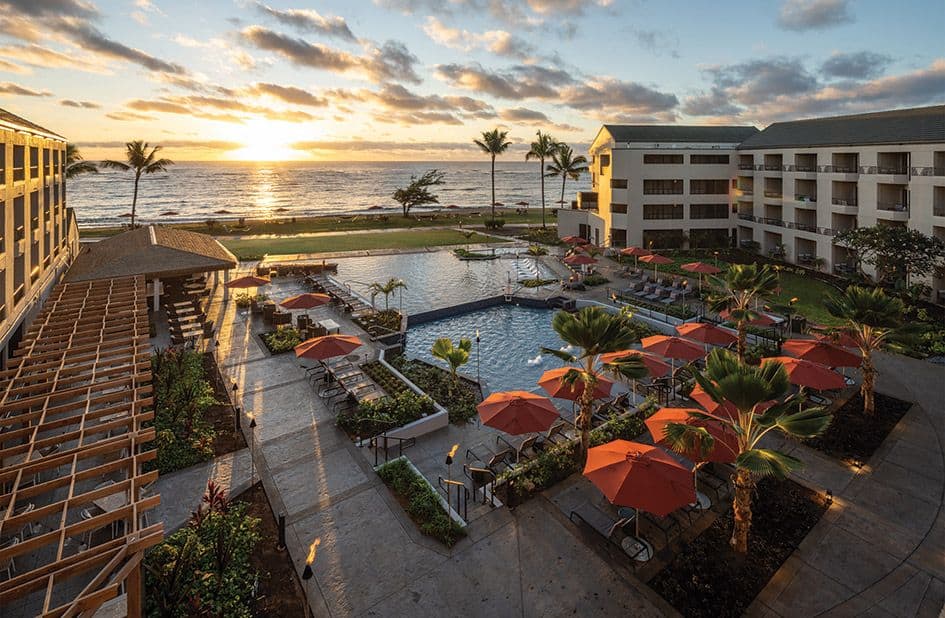 Captain Chad is right: “The worst day in Hawaii is better than the best day at home, eh?” he says, apologetic that our boat can’t venture around the Na Pali coast, on the northwest edge of Kauai, because of dangerous weather. From where I stand, leaning on the chrome railing of a 65-foot catamaran, drinking a Maui-brewed beer and watching a whale’s massive tail slip back into the ocean, things don’t seem too bad. An hour ago, I was floating in turquoise water, face-to-snorkeled-face with a giant green sea turtle. Half an hour before that, frisky Hawaiian spinner dolphins leapt alongside the boat. If this is the worst day in Hawaii, I’ll take two.

Before our excursion with Captain Chad and Blue Dolphin Charters, intermittent rain (Kauai’s rainy season generally lasts from November to March) had relegated us to indoor exploration. The Kauai Museum in Lihue crams a staggering amount of information into a small, delightfully homespun space, presenting a history of the island from its early Polynesian culture through Captain Cook’s arrival in 1778, and on to later international immigration, the modern surfing phenomenon and beyond. Did you know that the ukulele was invented in the mid–19th century by Portuguese immigrants to Hawaii?

The internet is lousy with listicles of Kauai tips and factoids: Rent a car. Watch out for feral chickens, which are everywhere. Take an ATV tour of where Jurassic Park was filmed. The north and south sides of the island are farther apart than they seem, and traffic can get nuts. So, consult a map, check the weather and let go of any rigid ideas about what has to happen and when.

A zippy 15-minute drive from Kauai’s Lihue airport (a six-hour direct flight from Seattle), the Sheraton Kauai Coconut Beach Resort makes for a, centrally located home base. From the resort’s location, you’re near points south, including Port Allen, for boat-trip departures; and the Wailua River, for kayak excursions, many of which include a waterfall hike. At the resort itself, a beautifully remodeled central pool area, unveiled in 2019, features a section shallow enough to let kids play safely while you grab a drink at the poolside bar. The classic mai tai tops every Kauai cocktail menu, but my favorite is the Jungle Bird: sweet rum and pineapple juice balanced with sour lime and bitter Campari.

If you’re still thirsty, head to Kilohana Plantation for a tasting at Kōloa Rum. The 10-year-old distillery uses Hawaiian sugarcane to produce its sumptuous booze, including a snappy, earthy spiced rum that will reorient any lingering opinions of that particular liquor formed during college. Tour the historic 105-acre property by taking a ride on the charming Kauai Plantation Railway; visitors 21 and older can try the Rum Safari in customized trucks reminiscent of both the jeeps in Jurassic Park and the Indiana Jones Adventure ride at Disneyland, with drinks (and, if necessary, ponchos) included. 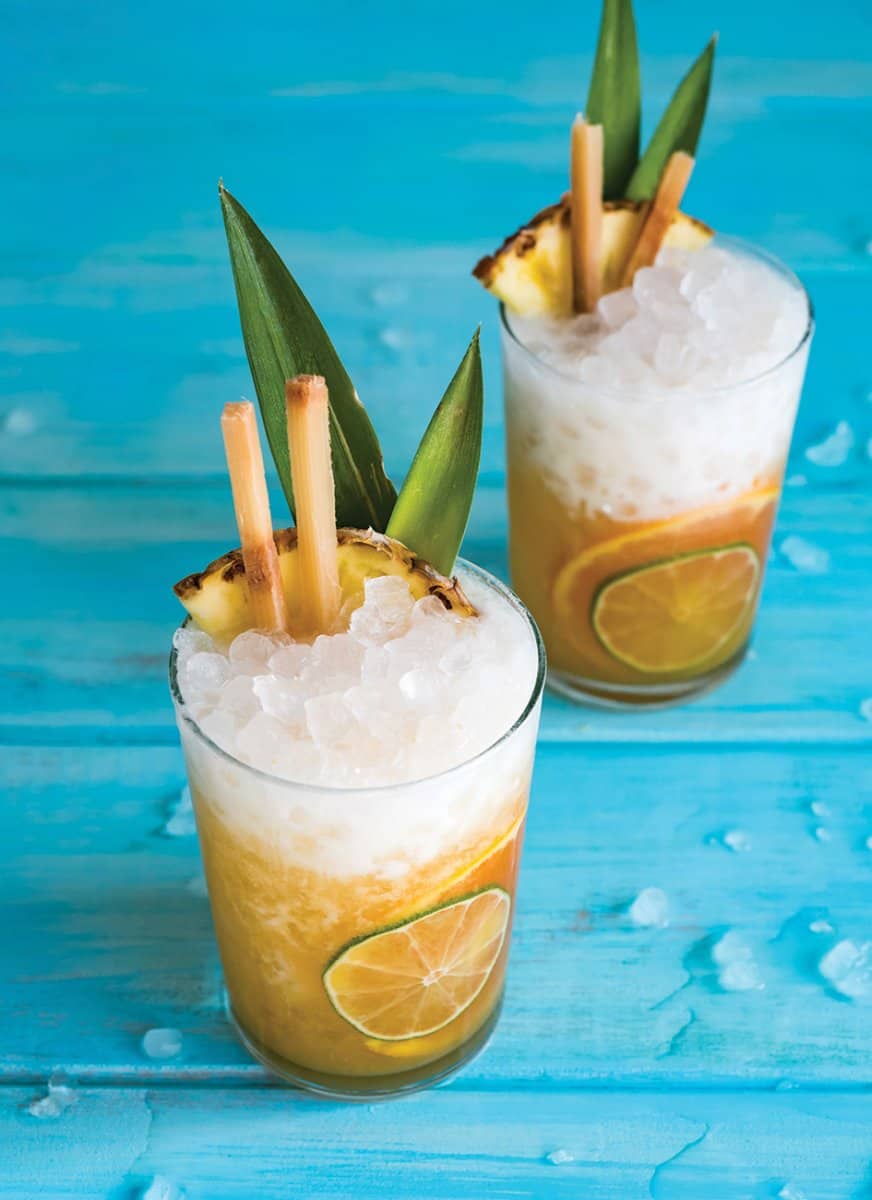 The best food on Kauai, in my opinion, comes from trucks and shacks, roadside sellers and honor farms, which are those tiny stands, often in front yards, that operate on trust: money in, papaya out. In a shopping center near Poipu, you’ll find Puka Dog dishing its plush, mildly sweet buns, hollowed out (rather than split) and filled with gobbets of drippy garlic sauce, your choice of a variety of fruit relishes, a spicy-sweet lilikoi (passion fruit) mustard and, of course, a Polish sausage. At the aptly named Coconut Corner in Waimea, I grab a greasy white paper bag of fried apple and banana lumpia and a tub of fresh coconut meat (my traveling companion opts for garlic shrimp at The Shrimp Station next door) before driving to Waimea Canyon. The recent rains have nixed plans for a hike into the canyon, but a car-accessible (and, be warned, tour-bus-accessible) lookout offers breathtaking views of this 10-mile gash carved into the heart of the island, layer upon craggy layer of rust- and sunset-colored earth dotted with pockets of velvety green.

On the far north end of Kauai, the lighthouse at Kilauea Point National Wildlife Refuge marks the northernmost tip of the Hawaiian Islands. The refuge is a birder’s nirvana, with a table full of binoculars offered at the visitor’s center. If you’re basing your trip on Kauai’s laidback North Shore, the Westin Princeville ratchets up the luxe while maintaining family friendliness. Take a shuttle to partner hotel Princeville Resort for beach access and a blufftop bar with an awe-inspiring ocean view, which you’ll try desperately—and unsuccessfully—to capture in a photo.

In nearby Hanalei, the quintessential surf town, stop at Pat’s Taqueria for tacos stuffed with sloppy, shreddy, slow-cooked kalua pork, and finish your meal with that unimpeachably perfect dessert, Dole Whip (basically dairy-free pineapple soft serve), from the adjacent Aloha Juice Bar. Grab coffee or a sandwich from Hanalei Bread Co. before settling in for a beachy afternoon at Hanalei Bay, or heading farther west to Ke’e Beach (just be sure to get the proper pass required; check dlnr.hawaii.gov).

I was first on Kauai years ago for a wedding, and the mother of the groom asked me, in all seriousness, “What are you supposed to do here?” The concept of agenda-free relaxation escaped her; I feel no such confusion. Organize hikes and helicopter trips if you like; lie on every beach and stop at every scenic overlook if that’s your speed. There’s no wrong way to experience paradise. 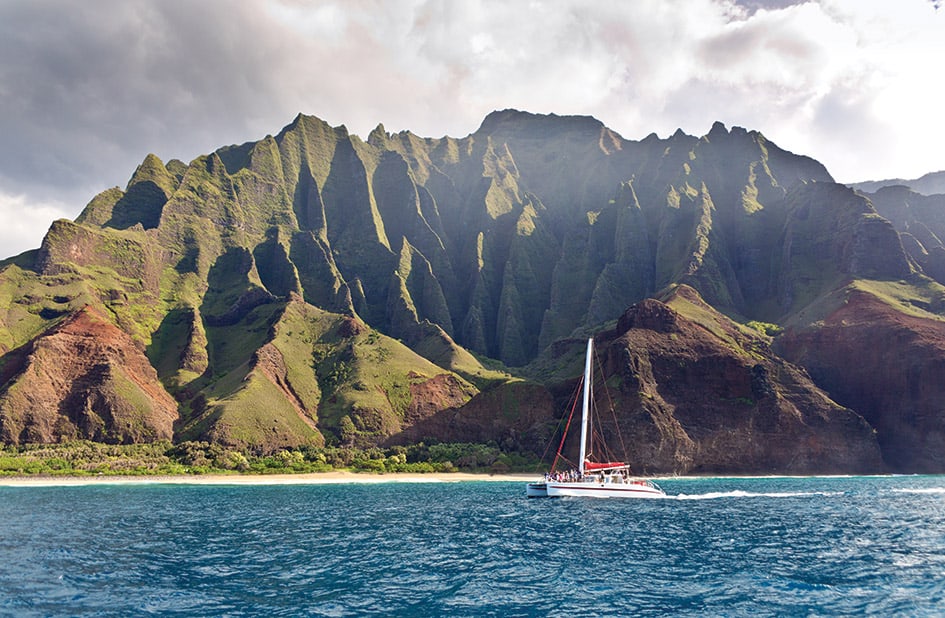