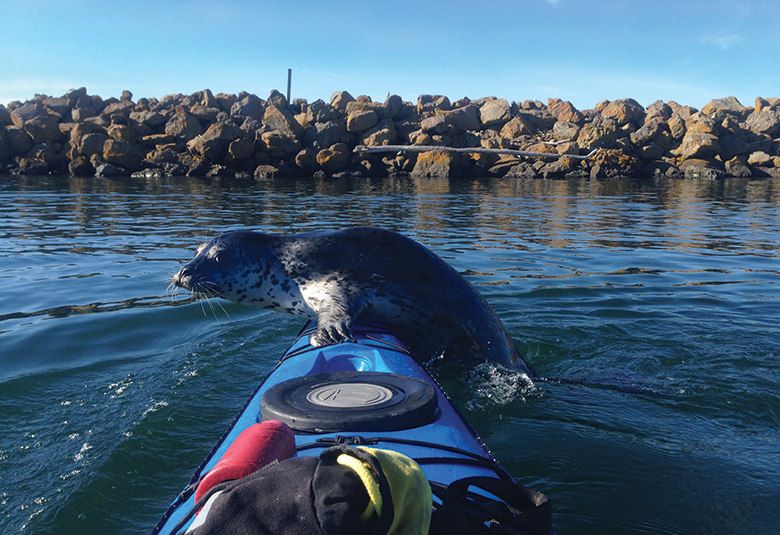 Maiden Voyage
Head to Agua Verde Café and Paddle Club and rent a paddleboard or kayak for a classic Lake Union adventure, offering striking city views as well as a close-up look at charming houseboats and glass artist Dale Chihuly’s studio (on the north end of Lake Union). Grab some tacos to go for a meal on the scenic deck before paddling off. Times and prices vary. University District, 1307 NE Boat St.; 206.545.8570; aguaverde.com

Chartered Waters
You’ve seen the Ballard Locks (officially the Hiram M. Chittenden Locks), but have you ridden through them? Join a Ballard Kayak group tour and experience the water elevator at the locks as you make your way to the Ship Canal. Or spend two hours exploring the inlets and shorelines of Puget Sound, where you’re likely to spot sea lions, great blue herons and seals. Prices vary. Ballard, 7001 Seaview Ave. NW; 206.494.3353; ballardkayak.com

The Waterworks
On a hot summer day, the young, and young at heart, still enjoy playing chicken with the variable timing of the International Fountain, an original feature of the 1962 World’s Fair. The splashing water is set to various musical scores, which can make it just as fun to watch as it is to jump in and get soaked. Free. Seattle Center, 305 Harrison St.; 206.684.7200; seattlecenter.com

The Watering Holes
When the sun is scorching, Seattle kids (and their parents) head to the spray parks and wading pools found in many Seattle neighborhoods. Local favorites include Jefferson Park’s Beacon Mountain Spray Park, which boasts views of downtown and the Olympics; the splash pad at Ballard Commons Park, conveniently located across from the library; and the Highland Park wading pool and spray park, which boasts a planetary theme. Free. Multiple locations. 206.684.7796; seattle.gov/parks

The Sand Lots
While away the hot summer days at the two biggest beaches in Seattle: Golden Gardens, in North Seattle, and Alki Beach, in West Seattle. It’s the one time of the year when dipping toes into the cool Sound is a relief. Watch the beach volleyball players during the day; come dusk, crowd around the fire pits and toast a few s’mores.

The Secret Spot
It’s a perfect place to pass a warm summer day, but even longtime Seattleites may not have heard of Everett’s Jetty Island, a 2-mile-long island and nature preserve open to the public from July 5 through Labor Day weekend. Grab a boarding pass at the Jetty Landing and Boat Launch to ride the free ferry that taxis you over to the idyllic beach. Be warned that there is no running water or electricity on the island. Bring refreshments and games, and swim, lounge or hike the island’s length, home to birds and other wildlife. When you arrive on the island, pick up a departure pass (you can trade it in for a later time if you’re having too much fun). Everett, boat launch at 10th and Marine View Drive; everettwa.gov/jettyisland

Beachy Scene
Lake Washington, warmer than Puget Sound, is the body of water of choice to dip into when swimsuit weather arrives. Madison Park Beach and Denny Blaine Park are the best spots to dive in near the city center, but be prepared for crowds. Matthews Beach and Magnuson Park, to the north, offer a quieter vibe and expansive lawns with spots for picnicking between dips; or check out Madrona Park on the south edge. Free. Multiple locations; 206.684.4075; seattle.gov/parks/find/parks

Cool Pools
The city may only have two outdoor pools, but both deliver impressive amenities. Mounger Pool has a 50-foot slide, plus a separate kiddie splashing pool. Colman Pool sits adjacent to Puget Sound in West Seattle’s Lincoln Park and offers heated saltwater as well as a tube slide.

Get on the Water

Cruise On By
Few things encompass the Seattle experience like a boat ride, and Argosy Cruises offers five tour options that take you out to Puget Sound, Lake Washington or Lake Union. The hour-long Harbor Cruise is perhaps the most popular; you’ll get up close to the majestic cargo cranes of the working waterfront and learn which hotel the Beatles once caused trouble in. Prices vary. Waterfront, 1101 Alaskan Way, Pier 55; 206.623.1445; argosycruises.com

Stretch Your Sea Legs
You’ve spotted seals and orcas in the daytime—now book an overnight stay on San Juan Island to see what lurks beneath the water with a bioluminescence kayak tour. You’ll head out after dark to search for microorganisms that emit (mostly green) light. Book early and check available dates; the tours are offered a week or two monthly, June through September, and only during certain phases of the moon. $125. San Juan Island; 866.461.2559; discoveryseakayak.com