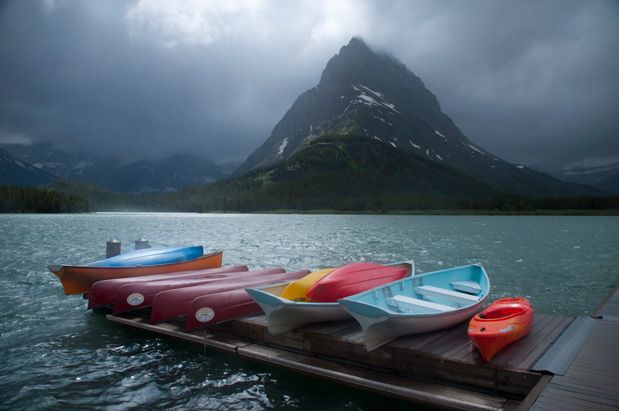 Here I sit on the veranda at Glacier Park Lodge, watching the ever restless clouds dance along the spires and humps of Glacier National Park, the whole scene lit by the warm rays of the late afternoon “golden hour.” I can relate to those fast-moving clouds; in fact I feel like one of them as my two kids and I are in the middle of a 1,500 mile “school’s out” odyssey-by-van from Seattle into the wilds of Montana.

Well it hasn’t all been wild, unless you count my five-year old son’s behavior in the dining room at the lodge earlier tonight. I always seem to be getting myself into these situations lately where roughing it ain’t so bad. What was going to be a four night post-school car camping road trip with kids turned into just another “research” trip for a travel writer looking for ink. And boy am I glad. The temps at night have dipped into the thirties and the winds never cease. Maybe it’s something to do with being at the top of the land mass straddling the continental divide, but did I mention it’s windy as hell here?

Anyway, we arrived two nights ago, traveling some 10+ hours in the car as I drove and the kids played on their electronic devices and scribbled and sketched in their notebooks. We stopped just past the Columbia River crossing at Vantage for a quick hike up to the Wild Horses viewpoint–well worth the stop for the view and the leg stretching.

Back in the van, I made some peanut butter and nutella sandwiches and off we raced. Onward and eastward. A new pack of colored pencils sharpened and me topping the 70 MPH speed limit, we made tracks across the state. The running joke was little Max, eager to check another state off his mental list, asking every five minutes, “Are we in Idaho yet?”

But soon enough, some 5 hours in, we crossed into Idaho. And then seemingly the next thing we knew it was “Welcome to Montana” and we were in the final stretch.

At 7:30 pm we pulled into Whitefish, Montana and spent the first night at the posh Grouse Mountain Lodge (Whitefish, MT; 877.862.1505;;grousemountainlodge.com). After a delicious meal there at the hotel restaurant Logan’s Bar and Grill, we changed into our bathing suits and hit the indoor pool and outdoor hot tub, which helped the kids work out the kinks of spending all day confined in the car. We all passed out for the night in our corner suite as rain began to patter outside.

The forecast for the next day called for a 100% chance of showers, but I was optimistic that a quick storm would pass and then the ever-present wind would clear the skies once again.

But that dream was not meant to be. The rain was torrential all day long. With visibility minimized by the weather, I decided to take the less direct yet likely faster road, Montana Route 2, to our next destination, following the verdant course of the Flathead River while skirting the southern edge of the national park. It was a good call, as traffic was flowing and the scenery was beautiful despite or maybe even because of the rain. We would save the Going to the Sun Road, the signature byway through Glacier’s finest mountain finery, for another, sunnier day.

I raced through the rain and three short hours later we were in line at the dock behind the Many Glacier Hotel (Glacier National Park; 406.892.2525; glacierparkinc.com) waiting to embark on a boat tour of turquoise Swiftcurrent and Josephine lakes, with a short guided hike between the two. As we shoved off aboard Chief Two Guns, a lake cruiser built in 1961 by the very same Glacier Park Boat Company (406.257.2426; glacierparkboats.com) that has been running these tours in its own wooden boats since 1938, the rains let up and misty views of pyramidal Grinnell Point dominated our view. Our young captain/narrator filled us in on the natural and human histories of this part of the park. Despite the gloomy skies, the tranquility of the lake and forest setting made for a relaxing cruise. We crossed the lake and then disembarked for a short third-of-a-mile hike across a forested trail to a dock on Lake Josephine, where we boarded another historic boat for a continuation of our tour — and to drop off some hardy hikers willing to make the overland journey up to Grinnell Lake and catch a later boat back. With my little ones in tow and grizzlies sniffing about in the forests, I decided that we would stay on the boat and make the return trip to the lodge sooner. Besides, there was hot chocolate and a raging lobby fireplace back there. And just our luck, as we cruised back across Lake Josephine, we spotted a huge moose munching on reeds on the shoreline — my kids’ first national park wildlife sighting and definitely worth a mention in their National Park Service “Junior Ranger” workbooks.

Back at the lodge, the hot chocolate never tasted so good as by the fireplace in the lobby. When we had worn out our welcome there — Max was ready for dinner and everyone in the lobby knew it — we proceeded into the lodge restaurant for a filling meal of comfort foods ordered off the kids menu and a much deserved round of drinks (G&T for me, Shirley Temples for the kiddos).

Back in our room after dinner, we could see out the window that the rain had started back up. The wind continued to blow hard, whistling through the cracks in the door out to our room’s balcony. Given the weather, there would be no stargazing, and we cozied up under our covers. Fingers crossed for a sunnier tomorrow, we slept off the intoxication of a nevertheless wonderful day in Glacier National Park.

When we awoke this morning, we realized that our finger crossing must have worked. It was a bluebird summer day. Occasional wispy clouds would race by, but the sun was clearly in control. We binged at the lodge breakfast buffet–waffles, pancakes, bacon, oh my!–and checked out. Once again, we were back in the van and on the road. Destination: Glacier Park Lodge on the park’s southeast corner (406.892.2525; glacierparkinc.com), where we would be meeting up for a group tour of the Two Medicine Lake basin via a historic Glacier “Red Bus” (shown above), a restored classic touring motor coach with four rows of passenger seats and a retractable canvas roof.

We met our driver, an affable retiree midwesterner who whiles away his summers driving a Red Bus and telling park visitors about the wonders of nature and man on display all around us. Back in the 1930s, the Park Service commissioned Cleveland, Ohio’s White Motor Company to make 500 of the Red Buses to use for touring throughout various western national parks, but only Glacier retained them through the years. In 2000 Ford Motor Company spent millions of dollars refurbishing Glacier’s fleet by restoring the signature interiors and exteriors and retrofitting the chassis with modern Ford truck engines that can run on either gasoline or cleaner burning propane.

On our tour, we took in Running Eagle Falls as well as another bonus boat trip on the Sinopah, the first boat in the Glacier Boat Company’s fleet, on Two Medicine Lake in the shadow of looming glacier-clad peaks. It was a wonderful way to see parts of the park that the average tourist might not take the time to visit, and to sit back and not have to drive for once so I could drink in the views. It’s a beautiful evening at Glacier Park Lodge, and the weather forecast posted on a bulletin board in the lobby calls for more of the same tomorrow. I will use the opportunity to finally make our drive across the 52-mile Going to the Sun Road, which traverses Glacier National Park’s magnificent high country and crosses the Continental Divide at Logan Pass — where the kids are hoping to turn in their Junior Ranger workbooks and take an oath to protect the park and its non-human inhabitants — and hopefully be awarded with badges and stickers galore. Then they plan to have a snowball fight on the top of the continent. After that we will begin the long drive home to Seattle, probably stopping for the night to camp somewhere in western Montana or Idaho. We have enjoyed the pampered lifestyle afforded us by lodge living, but we know we need a little camping to keep our outdoors chops up and our grounded souls a little more pure.

Signing off from Glacier National Park…