Travel Ideas: Sail Away on a Tall Ship

This article originally appeared in the June 2014 issue of Seattle Magazine. 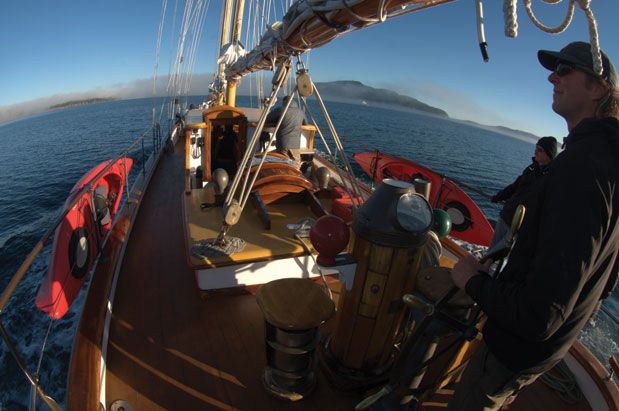 A shout from the foredeck shatters the foggy stillness: “Dallies on the bow!” I look to the captain, Greg Shea. We are in the wheelhouse of the tall ship Maple Leaf, during a four-day cruise around British Columbia’s Gulf Islands. He switches the motoring boat over to autopilot, and we clamber up front for a better view. Just over the rail in the cold, green waters, a half-dozen nimble, 6-foot-long black-and-white Dall’s porpoises hasten up from the depths like marine apparitions and swim alongside the boat, keeping up with our 10-knot pace like it’s a Sunday stroll. One breaches, then another, in what Shea chalks up to a form of play. While it’s a novel experience for me to take in such a wonder of nature, Shea, looking like a jolly Norse god with blond curls billowing out of his dark blue Maple Leaf Adventures cap, says, “It’s just another day at the office for me.”

Four-day, three-night Gulf Islands mini-cruise (the shortest trip Maple Leaf offers), $1,450 (Canadian dollars), about $1,285 U.S. (all inclusive). Other Maple Leaf itineraries include Haida Gwaii/Queen Charlotte Islands, Alaska’s Inside Passage and the coast of the Great Bear Rainforest; a href=”http://www.mapleleafadventures.com” target=”_blank”mapleleafadventures.com/a./p hr pbrMy visit to his workaday world began four days earlier when I met up with first mate Brandon Harvey on the dock at the Port of Sidney on Vancouver Island. He loaded my overstuffed duffel bag into the Zodiac “tender” boat, and we shoved off toward the outer harbor, where the Maple Leafnbsp; waited at anchor. The weather inversion zone that had delayed my flight from Seattle that morning was dissipating, but a fogbow formed a round frame for the Maple Leaf. Stretching 92 feet from stem to stern and with two masts each topping 100 feet above the waterline, it’s no wonder that this tall ship has been one of the most recognizable boats on the B.C. coast since it sailed out of a Vancouver shipyard back in 1904.

Climbing aboard gives an entirely new vantage point on just how good an old wooden sailboat can look. With bones of Douglas fir and yellow cedar, the Maple Leaf is trimmed out with gleaming brass fittings, a sweeping varnished mahogany cap rail and a fire engine red foredeck. Down below, a small galley opens up to a cozy, book-lined lounge that doubles as a dining room. In the middle of the boat is a guest cabin with eight sleeping areas and two adjacent “heads.” Behind that, the boat’s engine sits directly below its upright wheelhouse, and farther back is an aft cabin, where the crew bunks. It is cozy quarters for all aboard.

The rigging off the 100-foot masts make elegant patterns against the blue sky/embrbrAfter a brief round of introductions, safety instructions and happy-hour treats, Captain Greg returns to the wheelhouse and fires up the engines for our late-afternoon run into Swanson Channel and our night’s anchorage in James Bay, off Prevost Island. Within half an hour, we’re anchored, and chef James Maine serves up a sumptuous dinner of wild local coho salmon, rice pilaf, braised chard and chanterelle mushrooms with Okanogan Valley wines—followed by stargazing on the deck. The fog that had delayed my flight into Victoria earlier in the day is gone.

By morning, it’s back. But it’s nothing a bottomless cup of coffee and smoked salmon eggs Benedict can’t put in perspective. After breakfast, we take the Zodiacs to Prevost Island, where we hike around a dewy former orchard and collect a dozen sweet and juicy “heritage” apples, which will accent several meals and happy hours throughout the rest of the trip. Jolie Shea, Maple Leaf’s naturalist and steward (and also Captain Greg’s wife) proves an intrepid guide and interpreter, explaining everything from the mating life of crabs to the effects of climate change on the intertidal ecosystems spread out before us.

Back onboard the Maple Leaf, after a lunch en plein air of roasted chicken and warm yam salad with mixed greens and avocado, the fog has burned off, but there’s still no breeze. We motor 12 miles north to Wallace Island, a provincial marine park, where first mate Brandon throws a crab trap and ferries us into Wallace’s sturdy dock. Here, we are greeted by several cabins in various stages of mossy disrepair, the remains of Royal Cedar Cottages, a rustic resort that operated on the island for three decades through the 1960s.

Trails branch out in two directions to the truly wild sections of the island, and we follow Brandon down the southern three-quarter-mile route to Panther Point, a meditation-worthy rock tip jutting out into Trincomali Channel with verdant views of nearby Galiano and Salt Spring islands. Along the way, Jolie points out various highlights, including several types of colorful fungi and a few stellar peeling bark examples of the much-revered “arbutus” tree (we know it south of the border as the madrona). brbrAfter what amounts to a two-hour meander, we load back into the Zodiacs and score two red rock crabs, as well as a strange “feather duster” starfish, which we return to the wild to keep on keeping on.

That afternoon, a few of us take a side trip with Brandon around the Belle Chain Islets, a series of uninhabitable tidal rock ledges fronting the mighty Strait of Georgia on the open ocean side of the Gulf Islands, near Samuel Island, where we would be anchored for the night. After 15 minutes of putt-putting through the thickest fog of the trip, the Belle islets come into view, replete with a few dozen honking and harrumphing Steller sea lions. As we drift and watch from a safe distance of about 200 yards, a few sea lions swim closer, and one glides right up to my side of the Zodiac and looks me straight in the eye before lazily returning to his rock.

Back at the ship, happy hour is in full swing as James puts the finishing touches on another elaborate dinner. This feast features seared scallops and rack of lamb topped with a mint tomato sauce, and spaghetti squash on the side, paired with an Argentine Malbec, and followed by a dessert of goat-cheese cheesecake with amaretto cookies and stewed cherries. (My notes from the trip are starting to read like the ravings of a naturalist turned gourmand.) Like the night before, the fog disappears, and a few of us linger on deck appreciating the brilliance of constellations far from any city lights. As I drift off for another rock-solid night’s sleep in my berth, all I can think about is how much I am enjoying this brand of adventure.

The next morning starts out foggy and still, again. I am finally catching on to the prevailing October weather pattern here in the islands and resign myself to the fact that we might not get under sail at all. (As you’d probably expect, it’s clearer and warmer in the summer.) After a pancake breakfast, we motor through the fog (thank God for radar and GPS), eventually anchoring off Tumbo Island, a Gulf Islands National Park and the site of a former homestead that had been thriving as recently as the 1970s.

We walk around the island, stopping to check out the remains of several old cabins and barns, some gone save for rock fireplaces and cornerstones. Various fruit trees are bearing fruit in the overgrown, untended orchard, and Greg picks several ripe quinces off the trees, cutting one up on the spot for tastes—somewhere between a pear and an apple but dry and more tangy—and saving the rest to take back to James for chutney.

After a lunch of halibut and side-stripe prawn tempura over buckwheat soba noodles, accompanied by a ponzu seaweed and pickled vegetable salad, Greg fires up the engine yet again, heading toward Russell Island, our last anchorage of the trip. But a funny thing happens: The wind picks up, and for the first time, Greg gives the high sign to raise the sails.

Jolie takes three guests up front to help set the jib, while Brandon instructs the rest of us on how to raise the mainsail. At his word, I put my weight into pulling the halyard, as my mates unfurl the mainsail from the rear. Up it flies. The moment it tops out in the mast, the hull falls in line and speeds forward at 8 knots under nature’s power.

Greg cuts the engine. Gone is the mechanical hum I had come to associate with forward motion. There is just an intermittent whistling as the hull slices through the water. I adjust my equilibrium to a new but almost negligible lean on the deck. We tack and jibe in the wind for another two hours, heading west in Boundary Pass, in no great rush to reach our destination as we are right where we want to be.