Just over the Cascades, this river city is burgeoning with wineries, a food scene and sunshine 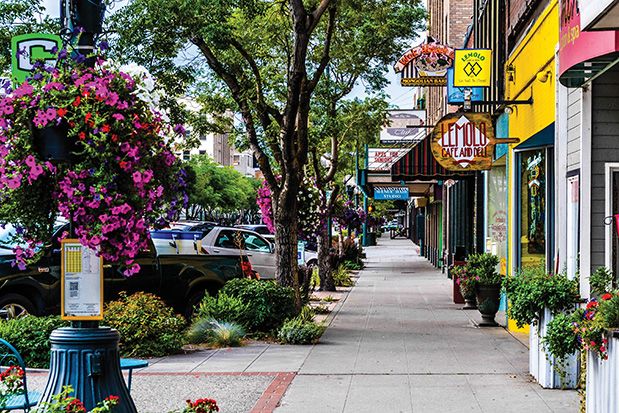 It’s springtime in Wenatchee, and this small city of 32,000 has much to offer a weekend explorer, especially one ready to cast off the gray shroud of a rainy Seattle winter and step into sunshine (200 days a year!). The mighty Columbia and Wenatchee rivers meet here and orchards and vineyards march up steep hills before giving way to the arid sagebrush of higher elevations.

Explore the small but intact downtown, eat well at the acclaimed Pybus Public Market, take to the hills in search of wineries and bike or walk along the Columbia River. You could come just for the day (Wenatchee is only a two-and-a-half-hour drive from Seattle), but there’s enough here to occupy you for a weekend or longer. Image Credit: Parsons + Co
The welcome flag is out at Warm Springs Inn and Winery

Stay: There’s no better place to use as a home base than Warm Springs Inn and Winery, just off Highway 2 and a few miles west of downtown. Owners Julie and Ludger Szmania have lovingly renovated a circa 1924 inn, nestled on beautifully landscaped grounds that spill down to the Wenatchee River. The couple, who for 24 years owned Magnolia’s fine-dining restaurant Szmania’s, are now using their impressive hosting skills to warmly welcome inn guests. Upon your arrival, Julie is sure to offer you a glass of wine from their Brender Canyon Vineyard, and in the morning, chef Ludger will cook you a breakfast (maybe a delicate Dutch baby with plum sauce or frittata layered with chunks of house-made pork sausage) that will leave you wishing the inn offered lunch and dinner as well. (Note: Dinners are occasionally available.)

Explore: On a Saturday morning, head straight to the Pybus Public Market, which since opening in 2013 has become a community gathering place with frequent events, performances and a Saturday farmers’ market. The building—originally owned by pioneering businessman E.T. Pybus, who ran the Pybus Steel Company—houses restaurants, food-related businesses and a community kitchen that frequently offers cooking demonstrations. It’s easy to find a few things you’ll want to cart home (olive oil and balsamic vinegar from D’Olivo, a bottle of wine from Jones of Washington, pickled vegetables or salsa from Almond Blossom). When you’ve filled your trunk, make your last market stop Arlberg Sports to rent a bike to take on the 11-mile, paved Apple Capital Loop Trail, just outside the market. It runs on both sides of the Columbia River, crossing at the north and south ends of the city.

Taste: While there are fewer wineries around Wenatchee than, say, Walla Walla, consider this a happy circumstance. No need to try to cram in a visit to 12 spots in one day. Head into the hills above town for a visit to the Malaga Springs Winery. The drive, partly down a gravel road, takes you through spectacular orchards and has a reward at the end: winemaker Al Mathews, an easygoing host who gives generously of his time and stories as he pours his award-winning wines. On the other side of the river, gregarious winemaker Mike Scott is likely to welcome you to his Martin Scott tasting room, which offers spectacular views of the Columbia River and a patio on which to enjoy them. Before leaving the area, buzz by the Wenatchee airport en route to Snowdrift Cider Co. Orchardist and cider maker Peter Ringsrud will tell you he tried making cider for years with disappointing results. That changed after he met U.K. master cider maker Peter Mitchell—and learned he was using the wrong variety of apples. In 2009, Snowdrift became one of the state’s first commercial cideries. It’s been turning out a variety of artisan ciders ever since.