Why Olympia’s 222 Market is Worth the Trip

Olympians, we apologize for invading your downtown parking. But, an artisan-style food hall like 222 Market (Olympia, 222 Capitol Way N; 222market.com) is an exciting destination and one we food lovers think is worth the drive.

At press time, the 15,000-square-foot building was scheduled to open in September, showcasing artisan food and beverage producers from around the Pacific Northwest, including Broth Bar By Salt Fire & Time; small-batch gelateria Sofie’s Scoops; and the city’s first oyster bar.

The 1940s-era building was originally the home of Olympia’s Packard car dealership and over the years has housed a variety of businesses. But, with renowned bakery The Bread Peddler as an anchor tenant for more than a decade, the building’s owners, Gray and Joy Graham, saw potential for a full-fledged food hall. They partnered with Olympia chef Lela Cross (co-owner of Capitale, Cielo Blu and Dillinger’s Cocktails & Kitchen) to handpick local, independent merchants, including a florist (Fleurae), and then hired green architect firm Artisans Group, which gutted and opened up the building’s interior, repurposing recycled lumber and Douglas fir into tables and countertops.

222 Market certainly plays a vital role in downtown Olympia’s revitalization, but it’s also pretty great for the destination-dining Seattleite. Here’s what to eat. 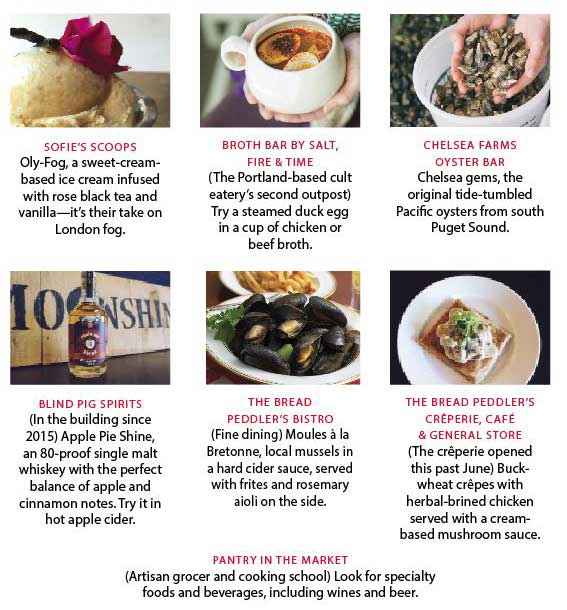