Once reserved for whiskey and wine aging, the wood-aged treatment is now being applied to beer 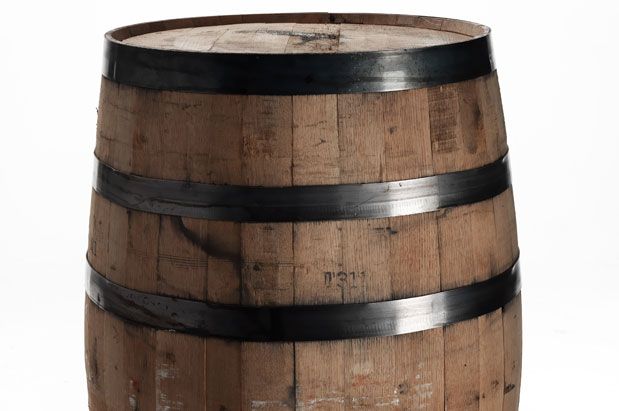 Patience, grasshopper. If patience is a virtue, barrel-aged beers are the most virtuous of all brews. Usually a beer is ready to drink after a couple of weeks in a stainless steel conditioning tank, but sometimes a brewer takes a finished beer and lets it rest in oak barrels for a year or longer. Typically, the barrels come from distilleries or wineries, and the previous contents add flavor and character to the beer as it ages.

Brewers fret over which kind of beer to put into which kind of barrel, but the most common combination is stout aged in bourbon barrels. Not only does the bourbon-soaked oak add flavors like vanilla, caramel and molasses to the beer, it increases the alcohol content.

More often than not, brewers fill barrels with dark, strong ales because that kind of beer lends itself to aging. These behemoth brews, which sometimes reach 10 and 11 percent (or more) alcohol by volume, are usually released during the winter months when they provide a potent tonic for seasonal affective disorder. Given the time and effort involved, it’s no surprise that these beers are rare and usually expensive: At a pub, a 12-ounce snifter may sell for as much as $6 or $7, and at a bottle shop, a 22-ounce bottle may set you back $12 or more. Recognize that consumer demand has an impact on pricing and these sought-after beers are produced in limited quantities.

BARREL-AGED BEERS TO DRINK NOW
Many breweries are dabbling in barrel-aging. Find these standouts at their respective breweries, in bottle shops and at better beer bars. They are mostly available in winter (November through March), but are often cellared for enjoyment later in the year.

Kentucky Dark Star, Fremont Brewing
Fremont Brewing takes its standard Dark Star oatmeal stout and ages it in bourbon barrels, acquired from noted distilleries such as Heaven Hills, for between eight and 18 months. Each batch is slightly different in flavor and strength, but this year is expected to be 10–11 percent alcohol by volume.

Hoppy the Woodsman, Schooner Exact Brewing
This is the barrel-aged big brother of Schooner Exact’s winter seasonal beer, Hoppy Holidays winter ale. Each year, a portion of that beer is diverted into whiskey barrels and stored for the following year. The alcohol content varies from batch to batch, but this one typically clocks in at 8.5 percent alcohol by volume.

Pike Entire, Pike Brewing
This robust stout is aged for six months in wheat whiskey barrels from Dry Fly Distillery and then blended with Pike’s XXXXX Stout to create a complex, rich beer that warms the belly and elevates your mood with its potency (9.5 percent alcohol by volume).