For Dr. Nancy Davidson, the fight against cancer is personal 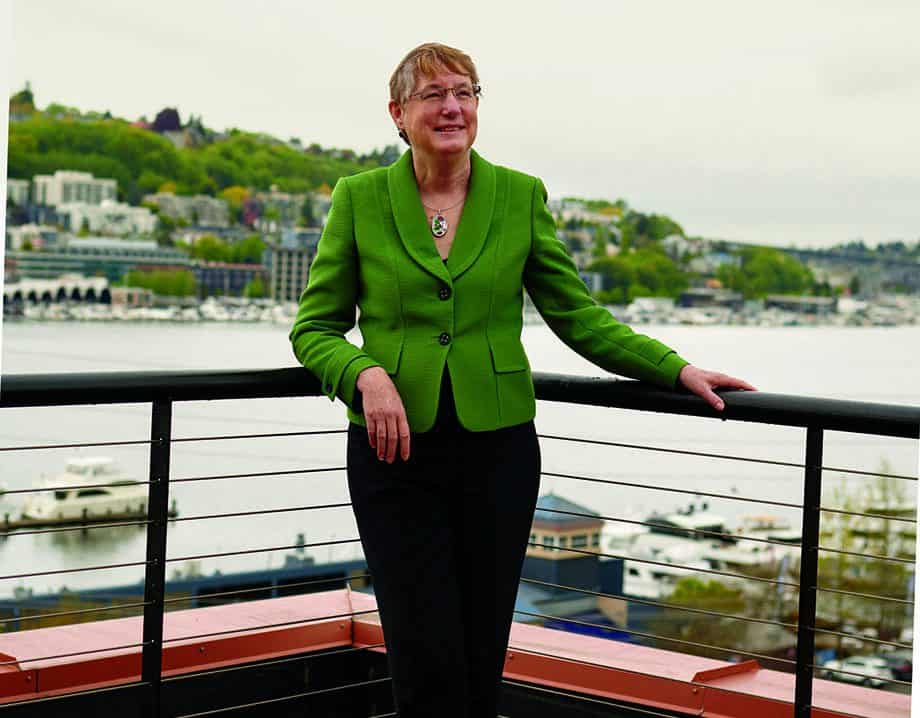 “I seldom talk about it, but I’ve gotten better about it over the years,” says Davidson, who was hired in 2016 as president and executive director of Seattle Cancer Care Alliance (SCCA) in South Lake Union, a partnership that includes UW Medicine, Seattle Children’s and Fred Hutchinson Cancer Center. “From out of nowhere, she went from diagnosis to death. Every textbook complication you could have, my sister had. All of the things we had learned about lung cancer were not pertinent to her tumor. I sometimes think that if she were diagnosed today, we would do better. It reminds me that nobody is immune. I keep Leslie in my heart.”

During her long career, Davidson has led numerous clinical trials that have advanced the understanding of breast cancer and how best to treat patients. She is particularly interested in epigenetics — how specific genes affect a person’s risk for developing cancer.

During Davidson’s tenure, SCCA has opened community clinics in Issaquah, Poulsbo, Kirkland and Bellevue. In 2021, SCCA conducted more than 520 clinical trials involving more than 900 patients; more than 25% of those were for brand-new therapies. The organization employs nearly 1,850 people and has an annual budget of more than $920 million.

In America, the National Cancer Institute has designated only 71 cancer centers and 51 comprehensive cancer centers — classifications that recognize rigorous standards for state-of-the-art research to prevent, diagnose and treat cancer. SCCA has earned both designations.

The reorganization means a new title for Davidson — namely, executive vice president, executive director for clinical affairs and director of the Clinical Research Division at Fred Hutchinson Cancer Center. She also holds the Raisbeck Endowed Chair for Collaborative Research at Fred Hutch, and heads the Division of Medical Oncology at the University of Washington School of Medicine.

Will we ever see a cure for cancer? The first thing to keep in mind is that cancer is not one disease. It might be naïve to think there will be a single cure for hundreds of different cancers. Having said that, there are certain kinds of cancers that we cure today. Several decades ago, certain types of childhood leukemia were death sentences. Most kids with Acute Lymphoblastic Leukemia are cured these days. Most men who have testicular cancer can expect to be cured. Many women with early-stage breast cancer will be cured of their malignancy by virtue of early detection. It’s the same for colon cancer — early detection can result in a cure. If you go on to die of something unrelated to your cancer or complications of your cancer, that’s a cure.

What advancements in cancer care and research have you seen at SCCA since you joined in 2016? Immunotherapy would be No. 1. We’ve known for a long time that cancer is a disease of the immune system. Your immune system doesn’t recognize these cells that shouldn’t be there, but it doesn’t get rid of them. As a consequence of years of fundamental research about immunology, I think we’ve come to learn more about why that happens. Importantly, we’ve come to realize that there might be ways that we can get around it.
We have been particularly productive in CAR-T therapy (chimeric antigen receptor T-cells, which is a form of immunotherapy). That’s the concept of taking the body’s immune cells and engineering them so that they will fight cancer cells. Some of the first CAR-T technology was developed on our campus by scientists based at Fred Hutch — Dr. Stan Riddell, Dr. Phil Greenberg and others. Ten days after I arrived, the Bezos Family Immunotherapy Clinic opened to bring this new, sophisticated therapy to an outpatient setting and do the appropriate clinical research.
That’s been a real success story for us. The CART-T therapy field has gone from a preclinical laboratory hypothesis to the point where there are several FDA-approved products, and our immunotherapy clinic is extremely busy. We pride ourselves on the fact that we do a lot of it as an outpatient service instead of forcing people to be in the hospital.

Has there been an intersection between Seattle’s tech community and SCCA? There have been some nice relationships with Fred Hutch, UW Medicine and the tech companies. We benefit indirectly from that environment and ecosystem. It makes this a really exciting area for scientists and researchers, the kind of place where they say, “I’d like to be there because I think the environment will be really supportive to my work and the science I want to do.”
Also, I think our environment invites scientists and researchers — when they have a great idea, and it’s come to the point where it’s ready to launch toward some commercialization — we have an environment around here that supports that.
The CAR-T therapy work started at Fred Hutch. Some of the early trials were done at Seattle Cancer Care Alliance. The company that spun out of that is called Juno Therapeutics, which is homegrown and very successful. Dr. Greenberg’s company, Affini-T Therapeutics, is another example. Next door to us here in South Lake Union is Adaptive Biotechnologies. Some of their founders started their careers at Fred Hutch.
That kind of interface is extremely important. Our environment enables us to have people who have these great ideas, can spin them out, and sometimes catch fire and come to clinical practice.

What is SCCA’s cancer research and treatment signature? For decades, our signature has been bone-marrow transplants. When I started training in medicine, that was a pretty new technology. If you were in the United States, needed such therapy, and had the means and the opportunity, you would come to Seattle. We got so good at it, we trained so many people, and now there’s expertise around the world. Thankfully, one doesn’t have to come to Seattle for a bone-marrow transplant.

What are some other areas of expertise here in Seattle? Today, if you have acute leukemia, I think you need to come here. For certain kinds of solid tumors — brain tumors, sarcomas, pancreatic cancer — where care is best delivered by multidisciplinary teams specialized in drug therapy, surgery, radiation therapy, immunotherapy and all the stuff wrapped around that, you probably ought to give us a call. You might need very sophisticated radiotherapy or proton therapy. You would be able to learn what’s required from a team of experts who are very versed in this and then figure out how you will strategize. Are there parts you can do at home? Are there parts you need to do here?
If you live in our region and you have a child with cancer, I can’t think why you would go anywhere other than our institutions for pediatric bone-marrow transplants work at Fred Hutch and Seattle Children’s Hospital.

President Biden is promoting a “moonshot” initiative to reduce by 50% the death rate of cancer over the next 25 years. Is it a reasonable goal? I think it’s a really bold goal. I love it. If you look at what he said, he avoided the word “cure.” He said let’s reduce “death” from cancer. He didn’t say we were going to do it tomorrow. That’s rational because it’s going to take a while. The other thing that says to me is that we will not treat ourselves out of cancer. We have to think about the whole continuum of what’s involved in preventing cancer — early detection, appropriate treatment for malignancies and the survivorship that comes out of that.

Were you surprised by how quickly vaccines were developed for Covid-19? The speed was amazing. The efficacy was impressive. We were all incredibly impressed by a couple of things wrapped around that. First, there had been years of research on that technology that had already taken place. It just so happened that it was poised to be taken advantage of.
Second, making vaccines against most kinds of infections is a whole lot easier than making vaccines against cancer cells. The viruses do evolve, but they’re not that different. It’s not like 200 different kinds of cancers. I don’t think it’s as straightforward with cancer as it is with certain infectious agents.

Has there been an intersection between Covid-19 vaccine development and cancer research? There’s a ton of interest in using the mRNA (messenger RNA) technology that informs the Moderna and Pfizer vaccines and trying to use it in the cancer space. The Covid vaccine strategy using mRNA vaccines didn’t come out of nowhere. A ton of basic science pursued over the years brought that mRNA technology forward, and some of the work was done in the cancer space.
The mRNA vaccine’s sequences produce abnormal proteins that are then injected into your body, and your body’s immune system is revved up to generate an immune response. The notion is that cancer cells have abnormal proteins, perhaps because of abnormal genetics from abnormal DNA. For some reason, your immune system is asleep at the switch. The question is if there is a way to reactivate your immune system to say, “These cancer cells shouldn’t be here. I need to get in there and do something about it.” Are there abnormal proteins reasonably common in cancers? Could you use mRNA technology to generate an off-the-shelf vaccine to cover some of these abnormal proteins?
These areas are being investigated in the cancer field, and it’s really exciting to watch.

What can the cancer space learn from the pandemic and vaccine? We did learn a lot as a field about what we can do if we put our mind to it, cut through some of the complexities and try to think about how to get there. I hope we will see some of that “can-do” attitude wrapped around (Covid-19 vaccines) in the cancer space.

What motivates you about cancer research and patient care? I’m a medical oncologist by trade, and I still practice. I largely care for outpatients who have breast cancer. That’s highly motivating, spending time with people confronted with breast cancer and thinking about how we can take what we do today and improve it. Interacting with individual patients and families absolutely gets me up in the morning.
Also, we understand so much more about cancer processes. With breast cancer, we’ve come to realize it is an illness with a lot of different subtypes. We’ve developed very sophisticated molecular treatments that target aberrant pathways in various types of breast cancer. You now hear about Herceptin, PARP inhibitors and hormone therapies, all developed for certain breast cancers.
The other thing that excites me is that we’re not done. I’d like to be able to retire because there’s nothing left to do. I’m fearful that’s not going to happen during my career. We’re going to have to continue. Today’s care is imperfect. But I’m really excited about today’s clinical trials because they will generate tomorrow’s clinical care.