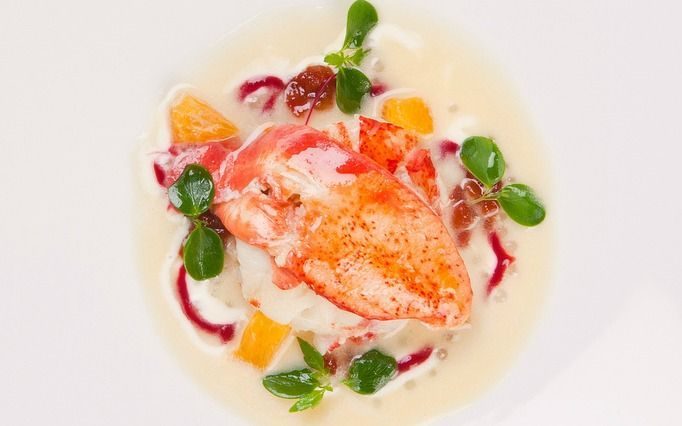 After my enjoyable but less than awesome lunch at Red Rooster, I headed back downtown to take a long afternoon walk. I needed to get a little exercise, to see my old neighborhood. I needed to walk my old favorite streets: Jane Street, Greenwich Avenue, Perry. I needed to make room, too, because somebody had reservations at Jung Sik.

Jung Sik is destined to be among the top 10 restaurants on everyone’s lists in NY this year. Why? First, the owners have just one other restaurant and that restaurant is in Korea. Second, the place opened in the old Chanterelle space in Tribeca; Chanterelle’d been there for 30-odd years, so it’d be about the same as some young guns from Korea opening a fine dining Korean joint in, say, the Ray’s Boathouse space. It’s major. (OK, and one of our waiters dropped the fact that Jay-Z had hosted a party at Jung Sik three days before my dinner. Jay-Z, people.)

Jung Sik is way new; if I weren’t on vacation (ie, if I were actually reviewing this place) I would’ve waited much longer to eat there. That being said, wow. The food was gorgeous (see the entire menu beautifully photographed here), a $125 prix-fixe five course menu that ended up being more like seven courses: two courses of amuse bouche followed by sous vide lobster in an apple gelee; sea urchin with crunchy seaweed rice and kimchi; scallops nearly raw, but somehow warm, in a deeply clammy broth; “five senses pork,” pork belly with a crunchy crust; and finally burdock root pound cake with white chocolate ice cream and a coffee sauce.

The meal was a total blast, crazy good even though most of the Korean flavors were given a heavy petting of French influence. Maybe in the coming months they’ll gain more confidence and punch up the funk and spice and leave the buerre blanc alone.

Service was wonky, but not in an inept way. It’s hard to describe exactly what was going on other than to say it felt like our servers were playing a game of telephone with us; there was always one word that was pronounced incorrectly, misused, or completely made up: the sommelier was referred to as the “wine-ian,” for instance, by one server. So it felt like there was a 3-second delay between someone saying something and us understanding what had been said. (I suppose I should mention that this wasn’t because our waiters were non-English speaking; one was a Russian guy from Staten Island!)

But the strange interactions ended up being hilarious, a bit like an uncle trying to play the part of a fine dining server, but with menu items that require speaking Korean. I was with old friends, and the service somehow made the dinner more fun for us. I’d eat at Jung Sik again in a heartbeat, and they’d only been open a week. But I guess when you’re feeding Jay-Z during your soft opening phase, you’d better start off tight.