If massage parlors are driving Seattle’s sex industry, why aren’t the police shutting them down? 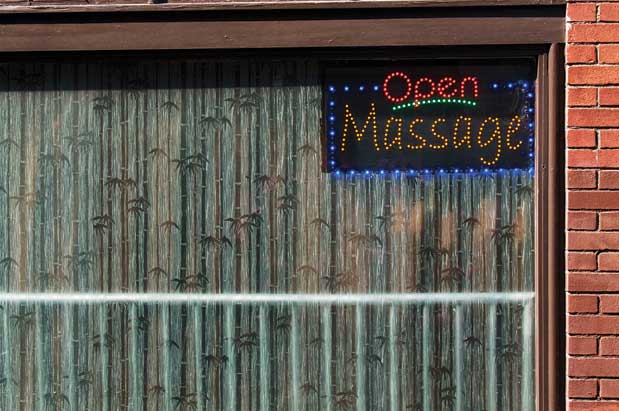 This article originally appeared in the February 2015 issue of Seattle Magazine.

Last year, the U.S. Department of Justice released a landmark study on the American sex industry. Commissioned by the DOJ, it set out to collect nationwide data on the underground sector for the first time, focusing on eight major American cities, including Denver, San Diego, Dallas and Seattle. Researchers spoke with hundreds of sex workers, pimps, local police, federal agents and others. Among their findings: Seattle may host the fastest-growing sex industry in the United States.

There is some debate over that ranking, as the study does not include major West Coast markets such as Los Angeles and San Francisco.

However, among the cities in the study’s purview, it notes that Seattle’s sex economy more than doubled between 2005 and 2012, as measured by the estimated amount of cash changing hands. Nearly every other target city saw its sex economy stagnate over that period. The study also identified the prime driver in Seattle’s boom to be massage parlors, spas and, increasingly, residential brothels run by Asian-Americans and Asian immigrants.

These operations are located in small buildings, strip malls and other low-rent locales. Their exteriors seem not designed to attract customers, with understated neon signs and drawn curtains.

“You’ll hear that this is primarily a Seattle and Pacific Northwest phenomenon,” says Captain Eric Sano, who as part of Seattle Police Department’s (SPD) Coordinated Criminal Investigation Section oversees Vice and High Risk Victims Unit. “That’s primarily because we’re a border state, with a huge international airport. [Overseas sex workers] come over the border, they fly in through Sea-Tac, and it’s a destination city.”

As with nearly every other service, the Internet has made these parlors easier to find than ever. Websites such as EroticMP.com and Rubmaps.com provide detailed locations and even reviews. The exact entities behind the parlors remain tough to peg, however. The parlors are managed by older women almost exclusively, and the study hints at connections to China, Vietnam and Korea in the form of money transfers, and potentially to organized crime in those countries. The evidence of nationwide networks within the United States is even stronger, researchers note.

There is also the difficulty in busting these operations. It’s very challenging to make a sexual exploitation case without cooperation, says Sergeant Jaycin Diaz of the SPD’s High Risk Victims Unit. “In Asian parlors, you can’t get the victims to talk. There’s a language barrier, there’s a distrust for police, there’s probably an element of organized crime where they’re worried about their families back home.”

In addition to undercover sting operations, police also cite parlors for failure to attain proper licensing for massage. For a time, this led many parlors to exploit a legal loophole in state law that did not require feet-exclusive masseuses—or reflexologists—to be certified. A state law went into effect last summer that changed that, but nonetheless, Sano says, “Many places focused on foot massages have prostitution occurring in them.”

Further clouding the situation is whether the women who work at the parlors are working against their will. Kathleen Morris is program director of the Washington Anti-Trafficking Response Network (WARN), which works as a liaison between trafficked people, law enforcement and services.

“One big misconception is that all prostitution involves human trafficking,” Morris says. “Yes, we see Asian women brought to the U.S. engaged in sex work, in King County especially…but we’ve encountered many foreign nationals who tell us they are freely engaged in sex work, and choose to do that. That’s one perspective we’re not hearing in the public discourse around this issue.”
Meredith Dank, the primary researcher behind the federal study, agrees. “Overall, the parlors represent more of a prostitution issue than a trafficking issue.”

Priorities also might be different if parlors employed underage women with any regularity. However, Dank and Diaz say this is not the case. And as the use of the Internet has expanded drastically, underage victims have become the police’s overriding focus.
“The Internet’s been around for 20 years, but it only started broadly being used for this about seven years ago,” Diaz says. “There’s a new site [to sell sex workers] that pops up every day.”

Whether they are ads on Backpage, Review Board, Eros or any number of other services, there are simply too many to keep up with.  The Internet has made much of the industry more open in the form of ads and online directories, but this is not the case with regards to the sale of minors. A 2008 report by Seattle’s Human Services Department estimated as many as 500 minors were exploited in the city’s sex trade every single night, a number that’s likely grown since then. Where once police could find them on high-traffic corridors such as Seattle’s North Aurora Avenue, they are now hidden amongst what Sano calls “the flood” of online posts.

Minors may no longer be soliciting as frequently on North Aurora, but arrest data shows the police still respond to prostitution calls in the area like clockwork. Sano attributes this to the vigilance of local residents, who lodge complaints and keep pressure on the issue. Time will tell whether this same “neighborhood watch” dynamic will affect the Asian sex industry, as massage parlors give way to Asian residential brothels, a phenomenon that researchers call fairly unique to the Puget Sound region.

“This is especially happening on the Eastside,” Diaz says. “You get very nice apartment complexes over there, and [prostitutes] are working right out of it. It looks like any other apartment, but three Asian girls are staying there and conducting business all day long.”

Dank says the research shows that these brothels increasingly are springing up around big employers such as Boeing and Microsoft. Situated in nondescript residences, the brothels offer a degree of privacy and convenience to a higher-income crowd. But given that brothel employees can see as many as 18 clients a day, it’s hard to imagine they’ll go undetected by their neighbors forever.

As the growth of the online sex industry has realigned enforcement priorities, it’s also forcing a conversation about regulations around the industry. If certain areas of the commercial sex industry are deprioritized, such as Asian massage parlors, should targeted decriminalization be considered? Police don’t think so, saying such a move would only expand the number of exploited people in the industry.

On the other hand, both Morris and Dank believe our current system is untenable, and unfairly punishes sex workers. Organizations such as the Sex Workers Outreach Project (SWOP) in Seattle argue that criminalizing everyone in the industry forces them to remain isolated and underground. A shift in policy could make it easier to find the true victims in the trade, and avoid punishing the adults who are in it of their own volition.

It’s debatable whether the Puget Sound region is home to America’s most thriving sex economy, as Dank is quick to call her federal study a rudimentary first step. What is certain is that the “world’s oldest profession” is changing fast. For law enforcement to recalibrate and keep up, new thinking and resources are required.

A version of this story first appeared as one part of a five-part story on prostitution in Seattle for Crosscut.com.