The Unsung Women of Grunge

The women of grunge rock play a starring role in an original new musical. 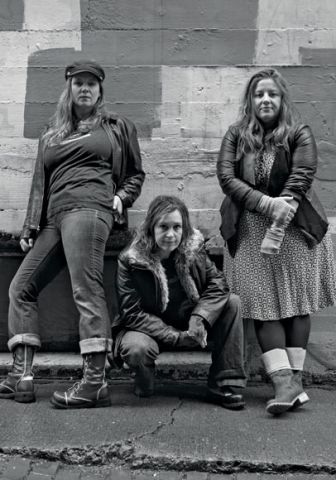 Grunge: The word still has the power to make longtime Seattleites cringe, conjuring as it does images of grubby cardigans and long johns worn under shorts, the faddish, flannel-sporting caricature of a musical era that began as something raw and personal and real. The co-opting of grunge—by fashion, media and poser bands—was precisely the opposite of the authenticity the local musicians were striving to achieve. For some, adding insult to injury is the fact that despite the strong presence of female voices in the scene, most retrospectives of the grunge era gloss over the women who helped make it so vibrant.

While there’s nothing to be done about the commodification of grunge (even now, the fashion industry claims a resurgence of “grunge style”), a few local women are working to jog our collective memory regarding the female musicians who played such an important role. “If you look at any history of that time, you’d think almost no women were making music,” says Gretta Harley, who, with Sarah Rudinoff and Elizabeth Kenny, wrote the new rock musical These Streets: A Rock ’n’ Roll Story. The writers—all of whom have lived in Seattle since the early ’90s—know that simply isn’t true. Harley and Rudinoff interviewed more than 40 musicians involved in the grunge heyday (including Carrie Akre of Hammerbox, Kim Warnick of The Fastbacks and Kim Virant of Lazy Susan) and found that the women had a lot to say about the time. Using a fictionalized narrative based in part on the interviews, These Streets reveals the experience of women involved in the emergence, explosion and aftermath of grunge.

Harley and Rudinoff, who perform together as the band We Are Golden, came up with the idea during a songwriting retreat. “We were both talking about wanting to do something more narrative with music,” says Rudinoff, a singer and actress known for her musical theater roles in everything from Hedwig and the Angry Inch at the Re-bar to Cinderella at the 5th Avenue Theatre. She and Harley, a local composer who cofounded the rock band Maxi Badd in the early 1990s and now teaches music at Cornish College, sketched out ideas. When they compared notes, Rudinoff says, “We had written basically the same story.”

The action surrounds five twentysomething musicians sharing a house in Seattle from 1989 to 1994. They hold band practice in the basement and engage in the grunge boom on the front lines. As fortysomethings, the same characters (played by older actors, including Rudinoff) reflect on the experience. The dual cast, Rudinoff explains, “allows for a conversation on how you think about life in your mid-20s versus mid-40s.” For example, “Lots of friends wouldn’t have identified themselves as feminists back then, but might see it that way now,” she says.

“The women playing music in that scene weren’t about being women, they were more about, ‘I play guitar,’” Harley says, making a clear distinction between the Seattle musicians and the Riot Grrrls from Olympia and Portland (such as Bikini Kill), for whom feminism was foremost in music making. Nonetheless, Rudinoff says, “There was an awareness of sexism in the scene, and questions of how to be a woman in an aggressive art form.” Harley distinctly recalls Maxi Badd pulling in smaller crowds after members started wearing less sexy, more comfortable clothing.

A story about music, These Streets contains a lot of it—12 songs from female-led ’90s bands including Hammerbox, The Gits and Incredible Force of Junior, plus two originals—performed live by Rudinoff, Harley and a full band. Rudinoff says the emphasis on music forces an economy in storytelling: “We only have 45 minutes for the script!” That’s why she and Harley brought in acclaimed local playwright Elizabeth Kenny (author of 2011’s Sick) to help tighten the narrative.

One of the biggest challenges for the team was the genre. “Musical theater has an intense inauthenticity to it,” Rudinoff says (e.g., people bursting into song before a kiss), “but the ethos of the time was being intensely authentic.” Former grunge rocker Harley served as a touchstone. “Gretta has a spine-crawling reaction when we suggest anything that doesn’t feel rock ’n’ roll,” Kenny laughs.

These Streets is set within the larger context of what happens when an intimate (even insular) scene is suddenly hurled into the national spotlight. The writers chose the time frame to encompass the pivotal shift: 1992, when the rest of the world noticed all that racket coming from Seattle. (Three seminal grunge albums were released in late 1991: Nirvana’s Nevermind, Pearl Jam’s Ten and Soundgarden’s Badmotorfinger.)

“What does that cultural shift do to a city?” asks Kenny. These Streets explores the question—an especially interesting one, given Seattle’s ambivalent relationship with fame. “In Seattle, you aren’t supposed to want success,” notes Rudinoff. “So what happens when a scene founded on the principle of being small and alternative gets enormous?” Whether you view the city’s grunge-inspired growth as a good or bad thing, she says, “If grunge hadn’t happened, we wouldn’t be the city we are today.”