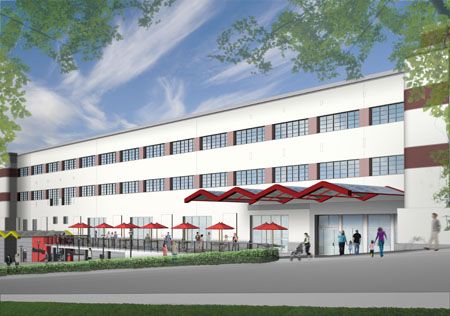 Josh Henderson says that Skillet Street Food could be one of the first vendors to set up permanent shop at the Seattle Center’s revamped, yet-to-be-renamed Center House food court, and is playing quite the booster as well, extending the call on the Skillet Facebook page to other mobile eateries to follow suit:

“The seattle center is looking to revitalize and completely change over the food court in seattle center. They are looking for artisans, chefs, street food vendors to take over newly designed kiosks as well as some of the current spaces. It is a great opportunity to re-imagine the food court into something that is ironically about great food!”

Henderson was one of the first in Seattle to elevate street food to a level you’d wait in a long line in the cold to pay $10 for and has brought his brand of comfort food back indoors to enormous success. Could he be on to something else here, or is it a pipe dream for the Seattle Center to ever be considered a dining destination?

The word “food,” on its own, is one that brings an immediate smile, accompanied often by a warm feeling in the chest and dreamy gaze, as well as the addition of a few extra ‘o’s in between the ‘f’ and ‘d’, as if those four little letters just aren’t quite adequate for expressing the feelings invoked. (Its sibling “sex” does not suffer the same problem, thanks to the dramatic “x” your mouth gets to form at the end.) Slap a “court” on the end of “food,” however, and it’s all over—the buzz kill is swift, but not without pain, a mild sense of revulsion, and creeping despair that this infinite world of pleasure has been suddenly reduced to a few rancid McChoices drowned in florescent lighting.

The Seattle Center Century 21 Committee, the folks behind the redesign of the Center House, wants to quash that negative association as it moves forward in its remodel now underway, and big culinary changes are in store for the nearly 50-year-old space built for the 1962 World’s Fair that hasn’t had an update since 1995. “At that time, food was there to support the programming that was going on in the building,” says Seattle Center spokeswoman Deborah Daoust. “People travel more for their stomachs now, and we want to give them that.”

Catering to a new generation of visitors who will be there because of the Gates Foundation, Chihuly Garden & Glass, new residential housing and continued theater and arts programs, the committee (in conjunction with the Levy Restaurants, which also currently manages concessions at CenturyLink Field) has been in talks with restaurateurs, mobile food trucks and other vendors to make the Center House what Daoust calls “an actual fine dining destination for the family.” The plan is for a variety of high-quality eateries, from carts to sit-down spots, plus a cocktail lounge or local brewpub, or even a wine tasting area and the occasional pop-up restaurant. “The focus is really on local,” she says. “We want the taste of the Seattle Center to be reflective of who we are and what we do.”

It’s too early to say at this point who might jump on board. But in October the Center hosted a mobile feast that Daoust says led to a few vendors expressing interest in establishing a more permanent presence there—which doesn’t sound unappealing at all, considering that walls are being knocked down to make way for sweeping windows and the hodgepodge of neon lights and wall murals are being traded in for clean and cohesive interior look, with a 40-foot balcony overlooking the fountain and Fischer Plaza. The committee is working with architecture firm Graham Baba, which is responsible for The Melrose Market, The Walrus and the Carpenter, Skillet Diner and Revel, to name just a few.

No brilliant ideas yet have stuck as far as what the name of the revamped dining area will be named, but one thing, Daoust says, is for certain: “It will not be called a ‘food court’ anymore.”