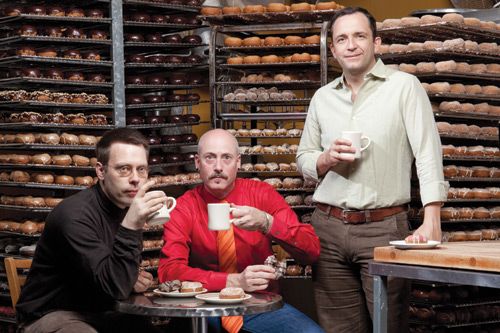 We were shocked and saddened to hear the news that Seattle barista Brian Fairbrother sustained severe brain trauma in a recent bicycle accident. The latest update states that comfort care will begin tomorrow (Thursday).

Fairbrother is actually the general manager of Espresso Vivace in Capitol Hill. We got to know him while we assembled the October 2010 “Coffee Issue,” in which he was featured as a key personality in the Seattle coffee scene for his 20+ years of work as a beloved barista.

Here’s a window into his work, as he told it to us then:

“Being a barista is like being a performance artist,” [Fairbrother] says. “It’s like a stage; you entertain.” When it comes to coffee, though, he’s a perfectionist, not a ham. An aspect of the job that he still enjoys, and that requires “the meticulous attention of a scientist,” he says, is getting that perfect shot “with the perfect coloration, clarity and texture—the ‘crema.’” Food editor Allison Austin Scheff knew of Fairbrother long before our October issue, however, and offers this memory:

“I’m very sorry to hear the news. Brian was my barista in my early twenties when I lived on Capitol Hill and he worked at the Vivace walk-up window. He made me feel like I belonged up there on that hill. He felt like a friend, even though we weren’t any more than just barista-customer ‘friends.’ I remember telling him about all of my dating woes (there were many!), and he would tell me all about the new bedding he’d just put on his bed because it was the solstice, and didn’t everyone change their bedding according to the solstice? It gives me such a warm feeling to remember those times and even though I’m sure he wouldn’t even remember me since it was, oh, 15 years ago, he made such a lasting impression on me.”

We know the Seattle coffee community is a little less strong without Brian. Our thoughts go out to him and his family.

Visit the Caring Bridge website established for Brian to send tributes and donations.