The flavors of Spain reach Seattle via Viridian Farms in Oregon. 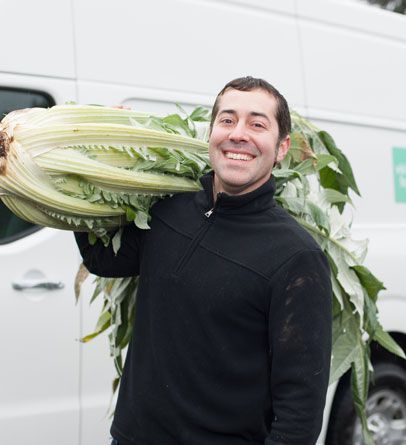 As you read this, farmers Manuel and Leslie Recio are probably in Spain—sampling Tempranillo in Catalonia, learning traditional recipes in Andalucía, or deep in a conversation about growing techniques with a producer in a market in Madrid. This is how the owners of the Oregon-based Viridian Farms spend the darkest weeks of winter.

And their farm on Grand Island, an inland isle encircled by the Willamette River and Lambert Slough, shows the fruits of these off-season sojourns. Among the blueberries, strawberries and peaches you expect in these parts, you’ll find rows of lush cardoons (a cousin of the artichoke), bright green calçots (onions from Catalonia), deep red pimentos (peppers often used in a Spanish-style paprika) and more. Oregon’s temperate climate—with warm summer days and cool nights, and mild winters—is similar to the northern Basque region of Spain, providing ideal growing conditions for the authentic European and heirloom produce. Eventually, the harvest makes its way into the kitchens at The Walrus & the Carpenter, Boat Street Café, Harvest Vine, Lark and other fine Seattle restaurants. When Café Presse owner Jim Drohman added Viridian’s piment basquaise, a Basque ground pepper (like a chili powder) to Café Presse’s Axoa, it helped secure the hearty beef stew of ground veal, tomatoes and peppers a regular spot on the menu.

One Viridian specialty hasn’t made its way to Seattle menus—yet. An oyster leaf lettuce (which grows wild in Iceland) that tastes so much like raw oysters some chefs use it as a vegan alternative. Hint, hint.