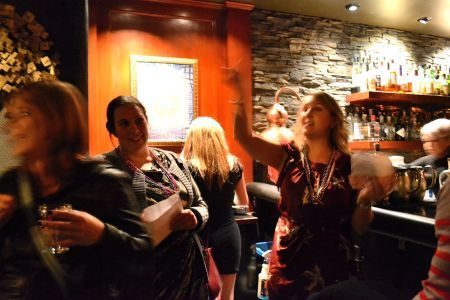 As Ken Burns recently illuminated for us, women were at the forefront of the two most significant developments in our country’s history of drinking: the enactment of Prohibition, and then its repeal. And when ladies’ thirst roared in with the ’20s, it wasn’t pink cosmos they were drinking.

Around Seattle for the last year or so, a modern-day group of women have been making their feelings about liquor known in the city’s bars, restaurants, distilleries and anywhere else glasses are filled: they’re not interested in froo-froo drinks that bury their raison d’être underneath layers of mixers and simple syrup—they want the real thing now, too, and they’re here to pay for it.

Once a month, the Ladies United for the Preservation of Endangered Cocktails meet around town in various drinking establishments respected for their cocktail quality, sometimes just to drink—but more often to expand their booze I.Q. through various classes and private presentations.

“We want to get women educated on brown spirits like whiskey, rum, pisco, and the classic cocktails like martinis and Manhattans,” says LUPEC Seattle co-founder Wendy Miller. “It’s not so much about taking those drinks back from men, but getting back on the same level.”

A recent late-summer gathering had them in the backyard herb garden of Poppy, where bartender Veronika Groth and the herb man himself Jerry Traunfeld gave a presentation on the use of savory herbs in cocktails. (You can read more about Groth’s extreme bad-assness here, and you can bet we’ll be keeping an eye on her in her new venture at Chino’s.)

I caught up with the LUPEC ladies last night at Rob Roy in Belltown, where the group was hosting a fundraiser for breast cancer they aptly named “Boobs, Booze & Beignets,” the first two elements being fairly obvious and the third coming from the steady supply of deep-fried dough being provided by the Where Ya At Matt food truck located at the end of the trail of powdered sugar leading outside to the curb.

Half of the proceeds from the beignets and specialty cocktails were donated to breast cancer research, while $5 raffle prizes included everything from gift certificates for a bar hop to elaborate spa treatments and home whiskey brewing kits.

Other recent outings have taken them to Knee High Stocking Co., Woodinville Whiskey Co., and a tasting of Japanese whiskeys at Liberty Bar. Most such establishments are happy to close to the public to host LUPEC for a few hours or pitch in raffle prizes. “Now that we’ve been around for more than a year, they know we’re not just out to get something for free,” Miller says. “And we’re big spenders.”

There are chapters around the country, from Boston and Philadelphia (where LUPEC originated) to Denver, Phoenix and New Orleans. The Seattle chapter’s first meeting had 12 attendees; with membership now around 200, the group is closed and only taking new members when one drops out (presumably because they moved, or checked into AA).

Miller says that the exclusivity isn’t about being a popularity club; rather it’s to make sure that its members are truly motivated by a genuine passion for classic cocktails. They are made up of female industry professionals, bloggers and committed enthusiasts.

The rest of us, well—we can just just celebrate the achievements of women in the appreciation of liquor in our own ways: go out, order something that isn’t pink, and leave an enormous tip.

Wherever you go, whatever you do, AJ has a drink for you

For the Love of ‘Nog: Sun Liquor’s Aged Eggnog Recipe

Miss your chance every year for Sun Liquor’s Christmas-only aged eggnog? Whip up a batch at home and sip all season long