Why Does Portland Have the Coolest Food Festival on the West Coast?

Portland gears up for Feast PDX, the chef-centered food festival now in its fourth year 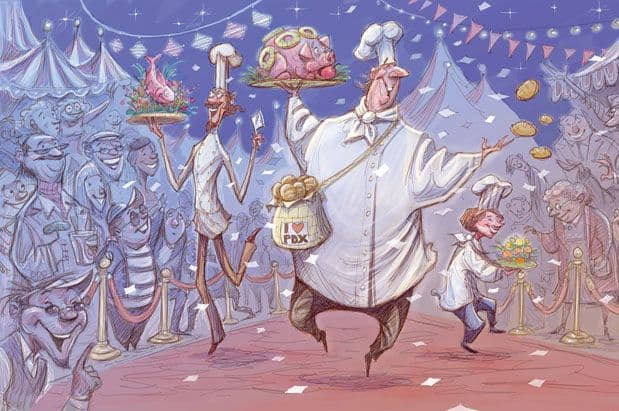 There I stood on the rooftop of an industrial building in Portland’s Pearl District, at the second after-party of the inaugural Feast Portland festival, starstruck. The man, the myth, the legend Fergus Henderson—chef at London’s St. John—stood within arm’s reach, unmistakable in his natty, navy pinstripe suit and round glasses, hands resting on his plump belly.

It had been a long day of eating and drinking, beginning with the Grand Tasting, an egalitarian event similar to Taste Washington wherein one ticket price is paid up front and from then on, participants gleefully take sips and bites without end. In early evening, I wound my way through the buzzy Night Market, moving from booth to booth strung with lights, to taste grilled mussels from Bangkok’s Nahm restaurant and New York City chef Anita Lo’s albacore tuna with cod roe sauce. All this before taking a taxi to Lincoln Restaurant for an extraordinary collaborative dinner, cooked by visiting chefs April Bloomfield and Hedy Goldsmith alongside Portland’s Jenn Louis, and with a Willamette Valley Pinot Noir paired with each course.

Recognizable chefs—from Portland, New York, LA, Seattle—were everywhere during Feast Portland’s debut weekend. But the presence of Henderson was monumental, and the right people—the other chefs and the media—understood that. He set a tone and a precedent; Feast would be the kind of event that chefs and winemakers want to be a part of, not just grudgingly agree to participate in.

Over the remainder of the four-day festival, between beer tastings and coffee seminars, media happy hours and all those after-parties (events that are as over the top or as good as the main events themselves), I wondered how the organizers had put together such a stellar event without dumbing it down. And in the four years since Feast began, I’ve often wondered why Seattle has yet to create a similarly stellar food festival, one that shows off the inner workings of our food culture; one that shamelessly brags to the world about our chefs, artisans, craftspeople and the inventive minds that have long called Seattle home.

In the last decade, the big food fests—Aspen, where the Food & Wine Classic has been going strong for 33 years, and South Beach Wine and Food Festival, which will host its 15th festival this winter—have had increased competition for talent, sponsors and food-tourist dollars as the younger “foodie” generation seeks out smaller, more regionally focused festivals in hot restaurant cities such as Charleston, South Carolina; Nashville, Tennessee; and, indeed, Portland, Oregon, where this year’s Feast Portland, September 17–20, will attract 12,000 people from all over the country.

Feast’s two founders, Portland’s Mike Thelin and, at the time, newly transplanted New Yorker and former VP of public relations for Food Network, Carrie Welch, were dreaming big from the start. They also struck while the iron was hot.

Back in 2011, Portland, Oregon, was a national media darling. There was an article about Portland in the national or international press every week, Thelin says. “All this momentum was happening…the whole city was ready.”

Thelin and Welch announced the festival on Eater Portland a year in advance of Feast’s September 2012 debut, then flew to New York to attend the New York City Wine & Food Festival to promote it. Welch’s deep national food industry connections meant VIP access to chefs and media; Thelin, who had planned the Eater awards (in 2010 and 2011), had also become an insider. On the Monday morning following the New York festival, the two met with Bon Appetit’s then new editor-in-chief, Adam Rapoport, along with Bon Appetit’s restaurant and drinks editor Andrew Knowlton, to pitch the festival and talk sponsorship. “Mike is a guy you trust,” Rapoport told me of his first meeting with Thelin. “We were at a point [in 2011] when we were trying to take the [Bon Appetit] brand in a new direction,” he says, and the idea of sponsoring a festival in Portland was “a no-brainer.” In its first year, Feast saw 8,000 attendees—a number kept relatively small, Thelin says, to emphasize quality over quantity.
Compared to Taste Washington—Seattle’s biggest wine and food event—during which 5,000 people converge on the CenturyLink event space primarily to taste wine during the daytime Grand Tasting events (more than 800 wines are poured, and bites are offered from 60 restaurants), Feast has a generally smaller, more boutique feel; only the marquee events (The Grand Tasting, the Night Market) draw substantial crowds. During the day, Feast offers several seminars focused on local bounty— locally crafted liquor, regional wines or coffee—as does Taste Washington. Taste Washington does have two boutique evening events featuring winemakers and local chefs (a Thursday kickoff Red & White Party and a DJ-ed Friday event, The New Vintage), but what sets Feast apart are its celebrated night events, such as the Night Market, Smoked and especially the collaborative chef dinners (and the after-parties!), which feature star chefs from all over the world cooking alongside Portland chefs. With chefs traveling from London, British Columbia, New York City, Texas and farther afield, these dinners are perhaps Feast’s biggest draw; they are the first events to sell out.

The two festivals’ choice of settings are also quite different: Taste Washington is held in cavernous CenturyLink
Field, compared to, say, Feast’s daytime Grand Tasting, held in Portland’s Pioneer Square, outdoors in the heart of the city, or its Night Market, held in an open riverside space under strings of twinkling lights.

Danielle Centoni, former editor of Eater Portland and frequent Seattle magazine contributor, says that Feast “has that cool-kid factor, so no one wants to be left out. Portland’s food scene is extremely close-knit and interconnected,” she continues, “so there’s a sense that Feast is like a big industry party, and everyone wants to be part of it.”

There’s also the international-chef firepower, which is what Welch believes is the event’s biggest draw. “Chefs lead the pack,” she says. Of course, Bon Appetit’s clout helps draw big name chefs from all over the world to the festival.

However, these culinary artists  must be invited to participate in Feast, and the necessary exclusivity—not every chef in Portland is asked to participate—is, at times, at odds with the city’s inclusive and collaborative sensibility. There also can be sour grapes when chefs aren’t invited back.

For some Seattle-area chefs, there’s a general feeling of “Why not us?” Why doesn’t our city have a festival like this? And why aren’t Seattle chefs invited to Feast more frequently?

Some feel that our city has been intentionally underrepresented at the festival. “I think they’re doing it on purpose,” says Josh Henderson of Huxley Wallace Collective, owners of Westward and Quality Athletics. In fact, at press time, just one local chef is heading to the festival this year: Rachel Yang (Trove, Joule, Revel), who’s returning to Feast for the second year in a row. (Renee Erickson was invited this year, but declined because she’s busy opening two restaurants. In the past, Erickson, Tom Douglas, Ethan Stowell and Jason Franey, then of Canlis, participated.) But the issue is on Thelin’s radar. “We have even talked about an ‘I-5’-themed evening event featuring all Portland and Seattle chefs,” he says. But, as of press time, it was in the early planning stages, and intended for industry insiders only.

Then again, Feast was never meant to be a Northwest food festival. “It’s an Oregon festival first, a Portland festival second,” he says. But with 40 percent of the festival attendees coming from outside of the region—and 40 percent coming from out of state—it would be hard to argue that the festival isn’t national in scope. Bon Appetit’s Knowlton points out, “Any event or festival that has the same chefs year after year gets boring. And as Feast Portland becomes stronger and stronger, the buzz in the chef community grows, and now, they are often the ones approaching us, saying they want to be involved.” Knowlton continues, “We’ve had conversations with folks like…Phil Krajeck from [New York’s] Rolf and Daughters about how they wanted to get involved in the event. And there are chefs like Esben Holmboe Bang from two-star Michelin spot Maaemo in Oslo, Norway, who really want to get there.”

With all these chefs angling for inclusion, the event is only getting stronger. And it’s likely that any frustration coming from Seattle chefs lies with the fact that our city doesn’t yet have its own similar festival.

“After Feast, Josh [Henderson] and some of us were circulating emails about an event, saying, ‘We gotta do this!’” Yang says. “I definitely got inspired.” Henderson also acknowledges the desire to have a festival here, with a more experiential feel to it, one that celebrates a sense of place: our waters, our mountains, our islands’ bounties. Not to mention our coffee culture, our Asian food culture, and our strong recent history of culinary innovation, being home to the Modernist Cuisine lab and ChefSteps.
“We’ve been off the radar for so long,” says Bridget Charters, director of Hot Stove Society, Tom Douglas’ cooking school and a longtime culinary producer for the Food & Wine Classic in Aspen (as well as the New York City Wine and Food Festival and other festivals). She believes Seattle is in its prime, with many talented chefs and fresh ideas. She’s been thinking about how to create a food festival here. “But it’s the when and the where,” she says, noting that it’s not ideal to compete with established festivals.

There’s also one other factor at play. It remains to be seen whether Seattle chefs would be as eager to participate as many Portland chefs have been. And participation by Portland chefs in Feast—not just by establishment chefs, but by up-and-coming chefs—is a key element in keeping the festival edgy and relevant.

Still, it’s the vision and the taste level that cofounders Welch and Thelin—who are much like the independent-spirited Portland food community itself—bring to the event that makes Feast what it is. Every year, the festival feels current and timely.

“Seattle is ripe for an opportunity,” Welch said when I asked why she thought there wasn’t yet a Feast type of event in Seattle. “But there’s a festival in Portland that’s upping the ante. If you’re going to do something, do something that’s awesome.”