Will Seattle Sacrifice its Charm and Livability to Tall Towers?

Six years after the Escala opened, its location is becoming a liability, could transform its views 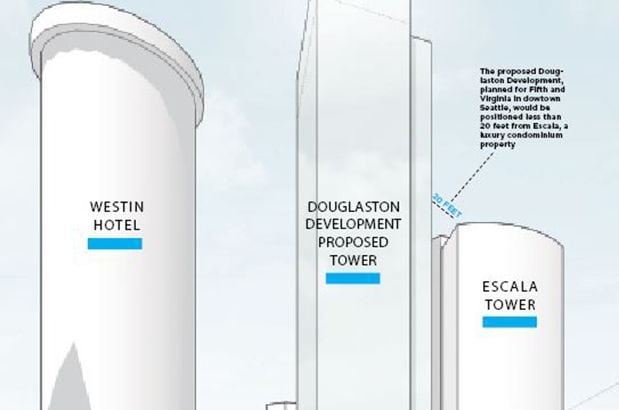 They have the sort of views typically reserved for helicopters, and the sort of location reserved for premium hotels. The luxury condos at the Escala tower—situated on Fourth Avenue, a block from the city’s retail center—are among Seattle’s most desired properties, so much so that billionaire Christian Grey of the 50 Shades of Grey novels lived there. But six years after the tower opened, its prime location is becoming a liability, and could transform its views from among the city’s best to among its worst.

With a population boom under way, residential towers are rising all over the city. Seattle has become one of the nation’s top five markets for multifamily housing units, says Alan Michelson of the University of Washington’s (UW) Built Environments Library, the school’s repository for data on urban planning and development. And in nearly every part of the city where these 160-plus-foot-tall developments are proposed, such as South Lake Union, there are strict requirements on the distance that must be left between them and how many can be built on a single block. This is to combat a sense of overcrowding and to preserve light, preventing the tall, dark canyons of glass and concrete that high-rises create in cities like Houston.

But the 30-story Escala is located in an area classified as the Downtown Office Core (DOC) by city planners, zoned to encourage tall commercial buildings, not residential construction. The DOC zones are jaggedly drawn by city planners, but include areas of the city stretching from Blanchard Street to Jefferson Street, and from Second Avenue to Eighth Avenue.

To city planners, issues such as views, light and privacy officially take a backseat to maximum density when it comes to office space, in hopes of encouraging job opportunities in downtown’s official business district. For this reason, some parts of downtown were allowed to have virtually no safeguards against towers being built right next to each other.

That’s why there is nothing legally stopping a 50-story tower from being built less than 20 feet from Escala, which would essentially give residents an intimate, up-close view of their neighbors across the alley. That new tower, proposed by the New York-based firm Douglaston Development, is planned for Fifth and Virginia, the current location of Icon Grill. It’s far along in the approval process. Another 50-story tower is proposed almost right next to it, on a small surface parking lot on the same block.
The city’s senior urban planner—Dennis Meier, strategic adviser with the Seattle Department of Planning and Development—says the Bed Bath and Beyond store across the street from Escala is also a prime location for a potential tower, as is the two-story terra-cotta building that currently houses Urban Yoga Spa, mere feet away from Escala.

Should all these developments occur, one of Seattle’s premier condo buildings could essentially be boxed in.

Needless to say, allowing a monolithic block of towers to be a mere few paces apart does not constitute “livable” city planning by most modern standards. In Vancouver, British Columbia, for example, regulations regarding tower spacing are in effect throughout the city, not just in pockets.

In reaction to the Douglaston development, residents of Escala have cried foul, adding dense tower spacing to the list of modern attacks on “Seattle’s soul” in a Seattle Times op-ed piece last October, and calling for a moratorium on new development in their two-and-a-half-block zone.

“The overcrowding effect would result in a hostile street condition, loss of sunlight, no privacy and no sense of neighborliness,” reads the op-ed piece penned by three Escala residents. “We don’t get a ‘do-over’ once these ill-conceived projects are built. Anyone who lives downtown, or cares about the future of Seattle, should be concerned about this lack of development control, which is due largely to the city’s flawed design standards.”

And because of this outcry, City Councilmember Sally Bagshaw says she wants to reevaluate the spacing between buildings across the city, not just between high-rises downtown.

Escala’s situation is emblematic of a common complaint in neighborhoods across Seattle: that livability, aesthetics and the city’s personality often take a backseat to accelerated development. Bagshaw, the council member representing the downtown district, doesn’t hide her sympathy for the imperiled tower. She referred to the building as “poor Escala” no less than three times in a short phone interview.

“I definitely think we need to increase density,” she says. “But at the same time, it’s not how many people can we pack in like rats. It’s how many people we can pack in while keeping this a great city, somewhere people want to live.”

In response to the Douglaston development, Bagshaw has formally requested a review of tower spacing standards in Escala’s DOC zone. But in reaction to that, activists like Seattle developer lobbyist Roger Valdez see the city’s wealthy gaining special treatment at the expense of those who aren’t as well off.

There are a lot of loud voices in Seattle’s development debate, but few are more caustic than Valdez, director of Smart Growth Seattle. For many, he’s become the human face of developer interests. On his blog, he’s hurled plenty of insults at homeowners who fight density for reasons of “livability” and “neighborhood character.”

But when it comes to Bagshaw’s request to change zoning in the Downtown Office Core, he cannot think of an issue that makes him angrier. “What people in Escala are trying to do is leverage concepts of light and air to protect their property values,” says Valdez. “This is the closest we get to corruption in Seattle. You’ve got rich, influential people, and they go to politicians and say, ‘Can you fix this for me?’”

Valdez is concerned that Bagshaw’s move represents a “process foul,” which could disrupt the city’s efforts to establish new housing policies under the Housing Affordability and Livability Agenda (HALA), a set of recommendations released last May. The policy recommendations in HALA took a great deal of negotiation between development interests, housing affordability advocates and other stakeholders. Mayor Ed Murray calls the overall agenda a “grand bargain.”

The concern, Valdez says, is that this delicate bargain could unravel if enough stakeholders ask for special changes to it. “This is the first way people start to bail out of HALA, by asking for narrow exceptions.”

The revision Bagshaw is requesting would change zoning standards established in 2006, when Peter Steinbrueck was the chair of the city’s Urban Development and Planning Committee. Since retiring from the City Council, Steinbrueck has continued to be an influential voice in the city’s development debates.

In an interesting turn, he was recently hired by Escala residents and Seattle environmental lawyer David Bricklin to fight regulations established during his tenure.

Steinbrueck says the odds aren’t good for stopping the construction of the Douglaston property. Bagshaw and Meier agree, considering its progress in the approval process and the fact that any new zoning change won’t affect it. A close view of their neighbors’ windows is likely in the cards for Escala residents. The question is whether the plans for other projects that could box in the luxury high-rise will ultimately be halted.

“Downtown is the face of our city,” Steinbrueck says. “We want to have a sense of pride about it. I would like Seattle to achieve the accolade of ‘Most Livable City,’ like Vancouver, B.C., does year after year. With this sort of development, Seattle is heading down the path of a cautionary tale, where it starts looking like Little Beijing.”

Overcrowded cities in Czechoslovakia is the example Bagshaw offers, but the point is the same. “It’s not going to be fun if we have cheek-to-jowl living quarters in the city,” she says.

How prevalent are spacing problems like Escala’s throughout the rest of the city? To make a case that this isn’t a narrow issue, Steinbrueck and Bagshaw cite research from 2006, in which the city named several at-risk sites for this sort of cramped development in DOC zones. But Meier can only think of five actual sites citywide that would be at risk for this sort of cramped development. Four are the sites that surround Escala; the other is a potential development site on the corner of Eighth Avenue and Pine Street. A 39-story condo and hotel building was planned there but put on hold in 2008.

Meier, a Capitol Hill resident, has lived in many apartments with windows that opened out to views of buildings. In one, he jokes, he could lean out the window and touch the building across the way. In fact, many city residents gaze upon a nearby wall or shaded window. City views can be ugly, Valdez says, but changing that requires reducing density, which means allowing fewer housing units to be built. And that, he explains, makes the city less affordable.

“Think about your Thanksgiving dinner table,” he says. “If Peter [Steinbrueck] comes along and says you need a certain amount of distance between chairs, you may go from 10 chairs to seven chairs. Then where do those three people go?”

But Bagshaw sees other issues at stake, such as the city’s aesthetics and image. Many feel that high-rises contribute to the skyline, which is a key part of Seattle’s presentation—to visitors and to its own residents. But Valdez says that Bagshaw’s rush to address the spacing concerns of Escala residents in the DOC zone, and not those living in mid-rises built mere feet apart, is a case of special favors. Bagshaw pushes back on this. Asked if the spacing rules for mid-rises should be reevaluated as well, she says, “Of course that’s going to happen.”

“It’s not just downtown, and it’s not just high-rises,” says Bagshaw. The city is “really trying to push more towers and more housing near the light rail, for example. If we’re putting in mid-height buildings that are just on top of each other, lot line to lot line, you lose some real charm in the city. It’s so critical for there to be room to breathe.”

Bagshaw later clarifies that she’s only looking at reevaluating the downtown DOC zones. This avoids the more controversial interpretation that she is proposing a new look at mid-rise spacing in Seattle, which could mean that fewer mid-rise properties could be developed. That would translate into fewer units to sell or rent. And in Seattle, developers are rushing to capitalize on the population boom.

There’s an extraordinary amount of development cash flowing into the city right now, says UW building expert Michelson. There were 21 new apartment units opened in Seattle in 2011, for example. In 2014, there were 4,965, and more than 5,000 are forecast for this year. The city is torn between welcoming the tax dollars all this development brings while the getting is good, and pushing back on developers for livability concessions, such as setbacks and proper spacing. Without these kinds of concessions, he says, you become a city like Houston or Chicago, where the small amount of space between buildings can cast streets into shadow, or simply look “strange.”

“Many people wish we could slow down the development process a bit, get developers to work together to ensure we have a livable city full of light and air,” says Michelson. “But how do you get Type A, ‘make money’ developers to cooperate or compromise? Think of Donald Trump. He’s a developer. Does he seem like the sort of guy who’d want to compromise on livability issues?”

Breathing room. As thousands of new residents flock to the city, it’s not an issue that has received much play in Seattle’s debates over housing development. For better or worse, the plight of the Escala tower may be about to change that.