Hail the return of a king. 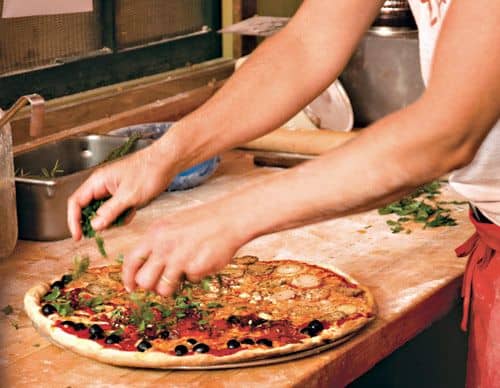 Owners and brothers Adam Cone and Aaron Crosleycone (a mash-up of his and his wife’s last names) told me they’d painted the second coming of World Pizza a bright tomato red to combat the gray Seattle sky.

It works: The new International District space casts a glow onto the sidewalk outside, luring passersby into the groovy, cheerful interior fit with a low-slung orange couch and retro fixtures.

The brothers closed the original Belltown World Pizza way back in 1996; 15 years later, Adam (who spent many years baking on Vashon Island) and Aaron (an antiques dealer) reopened in July, serving pizza that’s not quite New York style (it’s a little too topping-heavy), but it’s close.

The original World Pizza had a following for its potato pizza ($3), and it’s no wonder: They nail the balance of hearty potato slices, aromatic rosemary, garlic and just enough Gorgonzola to get the point across, but not so much that it steals the show. There’s also plain cheese ($2.50) and Field Roast veggie sausage ($3; this time around, the place is vegetarian), and while I found each of those good enough, the potato slice is the one I’ll go back for. And a big, soft chocolate-chip cookie, too.