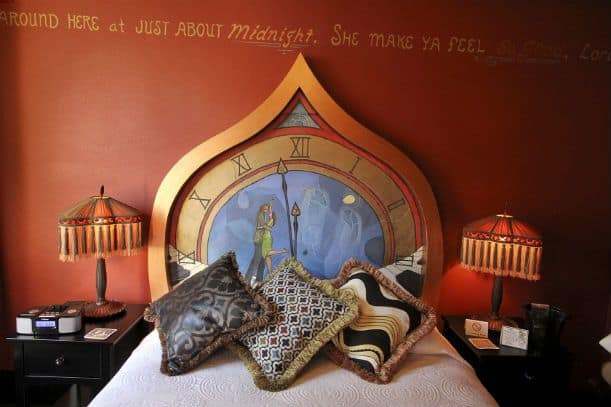 When the City of Bothell invited McMenamins to consider the city’s landmark 1930s-era Art Deco Anderson School as a site for its first Seattle-area hotel, the Oregon-based family business, led by brothers Mike and Brian McMenamin, was faced with an exciting, and perhaps slightly daunting, challenge. The school would be the largest historic property the hospitality group had ever converted into one of its signature hotel/breweries.

McMenamins went for it, using the former junior high school’s sprawling spaces as inspiration for fun features. The redevelopment preserves the school’s pool, adding a tiki theme to the pool building. The 72 classrooms in the main school structure have been dressed up as hotel rooms, while other buildings house the on-site brewery, movie theater, day spa, restaurants, bars and event spaces, with public gardens planted among them. The place is full of McMenamins’ signature eclectic artwork and murals, which incorporate local history as well as McMenamin family and brewpub lore.

The McMenamin brothers are known best for converting historic buildings in Oregon, such as Masonic lodges and schools, into family-friendly, cozy and quirky brewpubs, hotels and theater pubs. “This is probably the best project we’ve ever seen as far as location,” Mike McMenamin says. “The buildings are beautiful—the University of Washington [Bothell campus] has 10,000 people right there, there’s high tech everywhere, there’s Chateau Ste. Michelle and all the tasting rooms close by. It’s all about community.” Opens 10/15, Bothell, 18607 Bothell Way NE; 425.398.0122; mcmenamins.com/AndersonSchool