The Must List: Uncode at the Forum, Ray Troll at Seattle Aquarium, Realism in Edmonds

What to do in the days ahead: A cool film series at Northwest Film Forum, sub-aquatic rock at Seattle Aquarium and glimpse into the void at On the Boards 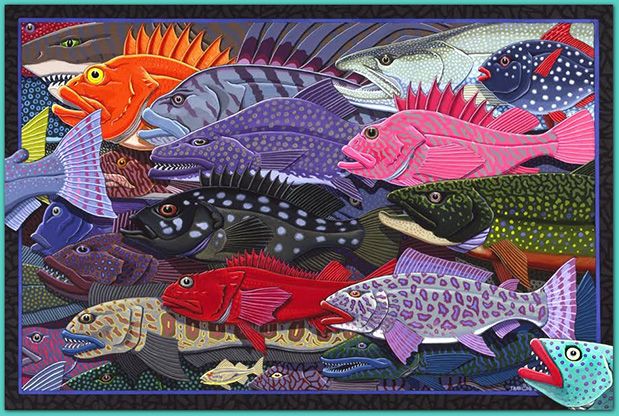 Must Watch
UNCODE at the Forum
(2/23, 7 p.m.) UNCODE is an ongoing series made up of short, documentary style films created by African American artists and storytellers. Each month, the series premieres a new collection of stories related to art, tech, food, health and travel. In celebration of Black History Month, UNCODE will debut a new short film and share some exciting news about its upcoming film screening tour at Northwest Film Forum in this special event, a great place to meet the UNCODE creators and support Black art and filmmaking. $8, nwfilmforum.org

Must Trawl
Ray Troll and the Ratfish Wranglers
(2/23, 8 p.m.) Ray Troll is the most celebrated visual artist from Ketchikan, Alaska, known for his colorful, playful images of fish and prehistoric creatures, various books like The Sharkabet (26 different sharks, A-Z) and iconic graphics that can be found among the t-shirt collections of approximately 1 out of 5 dads (re: “Spawn or die”). The artist is lesser known what he calls his “sub-aquatic, neo-folk, fishy-funk punk-rock for the masses,” but certainly there’s no better place to hear it than in the company of the Seattle Aquarium’s underwater inhabitants. Prices vary, seattleaquarium.org

Must Contemplate
Awaiting Oblivion: Temporary Solutions for Surviving the Dystopian Future We Find Ourselves Within at Present
(2/23-2/26, times vary) A show that answers the eternal question “What would you do if an anonymous street artist asked you to use your art to solve the problems of an uncertain world with a crumbling political system?” Tim Smith-Stewart and Jeffrey Azevedo answer by using performance, street art and secret messages. Prices vary, ontheboards.org

Must Get Real
Northwest Social Realism and the American Scene 1930-1950
(Through 3/26, times vary) Time travel with the Cascadia Art Museum as it brings us to the Northwest art scene that covered the industrial, political and social era of the Great Depression and World War II. Art around the nation was changing from themes of hope and idealism to work that portrayed everyday aspects of life, urban and rural environments and industrial activities. At the time, Postmaster General James Fareley dubbed the region the “Soviet of Washington,” as some artists used communist and socialist ideologies for inspiration, often depicting social class, labor issues and racial injustice in their work. Prices vary, cascadiaartmuseum.org

Must Sit In
Town Hall Past and Future
(2/26, 2 p.m.) Join Town Hall founder/Seattle media guru David Brewster and the venue’s former scholar in residence Steve Scher for a panel discussion that includes experts in architecture and history who will tell the story of the site, a former Seattle Fourth Church of Christian Science, “and how it was uniquely suited to transform from an expression of 20th century religious community into a 21st century home for civic, intellectual, and cultural life.” The program will include tours of the century-old building as well as a preview of what’s ahead for the non-profit as a major renovation project gets underway. Free, townhallseattle.org