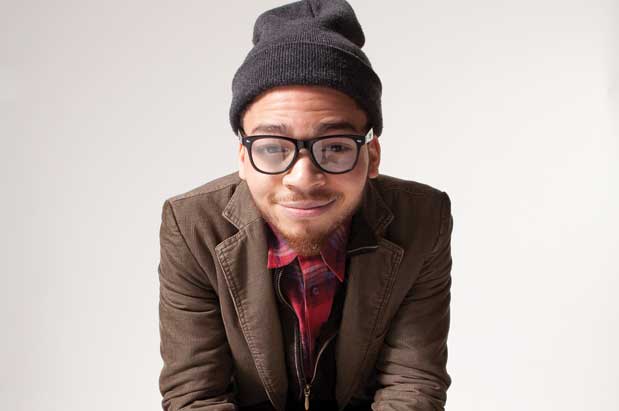 What’s your favorite current Seattle band? If you have trouble answering (or if you draw a blank after Macklemore), we’re not going to judge. But we are going to suggest it’s time to check in with the city’s thriving indie music scene. New local bands are exploring sounds, blurring genre boundaries (though we’ve wrestled them into categories here) and playing vibrant live shows all over town (see our Live Music Venue guide). Even with this sampler of 50 bands, we haven’t scratched the surface of Seattle music. Listen right here—where you can stream songs from all 50 bands—and also try tuning in to KEXP (the city’s unsurpassed discovery engine for local music) for a whole week. Soon enough, you’ll have an answer to the above question—and you might just go on and on. Gateway Bands: Sade, Aaliyah
Shaprece is a child of many musical styles—from soul to blues to electronica—and she isn’t afraid to use them all. Her rich vocals might just as easily inspire you to dance slowly as to shake wildly; her sense for what works in a dance club or an intimate setting is keen. Her EP, Molting, released in July, showcases her ability to blend that gorgeous voice with electronic beats and orchestral elements to an intriguing effect—one that seems to come from the future. We’re eager to hear more on her debut full-length album, due out in early 2015. shaprece.com

Gateway Band: Stevie Wonder
This nerdy blond boy may have one of the purest soul voices in Seattle music. The buttery-smooth singer honed his craft in the small town of Chewelah, Washington, which, he noted during his performance at Chateau Ste. Michelle this summer, has fewer residents than that night’s audience. He has come a long way, and his star continues to rise, from his appearances on KEXP and at SXSW to his performances on the Conan O’Brien and David Letterman shows. But judging by his new single, “Million,” he’s trying to keep it together, singing, “Your pace is dangerously close to the limit / Slow, slow, slow.” allenstone.com

Gateway Band: John Legend
Winner of the 2014 Sound Off! Award (EMP’s Battle of the Bands for the 21 and younger set), Terry is a silky-voiced singer with magnetic swagger. Though he went solo for the competition, he’s an integral part of Seattle electronica group Hightek Lowlives, with Kjell Nelson (and cameos by Gabriel Teodros), in which he embraces his sci-fi side. On the band’s new album, Humanoid Void, Terry blends a space alien/robot aesthetic with a voice that reveals hints of Cody Chestnutt and John Legend. This young man is definitely one to watch. hightek-lowlives.com

Gateway Band: Erykah Badu
The duo behind Fly Moon Royalty always seems to be having a good time. Action Jackson composes the beats, and Adra Boo is like a superhero, growing in sonic stature with every beautifully sung note. The music has strength, like the best of the Philadelphia and New York hip-hop and R&B groups distilled—as if Erykah Badu and The Roots made records together. The newest EP, Unfinished Business, stirs electronica, soul, R&B and hip-hop into a sexy stew. flymoonroyalty.com
How would you describe your sound? “The sweetest mixture of the best, most sophisticated and sexy feelings, truth and a handful of stank!” —Adra Boo Gateway Band: Tracy Chapman
Sporting a shock of red hair styled in a Mohawk in her video “African Girl,” Kenya-raised Wachira sings about integrity and identity, articulating a folk agenda via African-tinged rhythms. Having just gained American citizenship last year, she is Seattle’s take on Tracy Chapman, belting out soulful melodies with a powerful voice and confident strumming on an acoustic. She conjures India Arie, and a bit of Bob Marley, too, echoing as she does his message about the importance of family, sacrifice and carrying on through struggle. naomiwachira.com
How would you describe your sound? “My sound is a reflection of the two worlds I call home…Kenya and America, so I call it Afro-folk. But it is also an expression of the world I hope for.” —Naomi Wachira