How could a bunch of people wearing handmade hats be wrong? 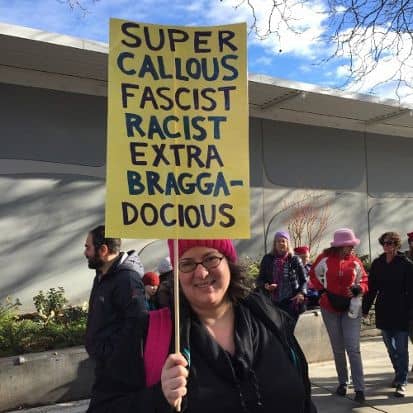 A number of Seattle magazine editorial staff attended Saturday’s historic Womxn’s March. These are their reflections of the event. 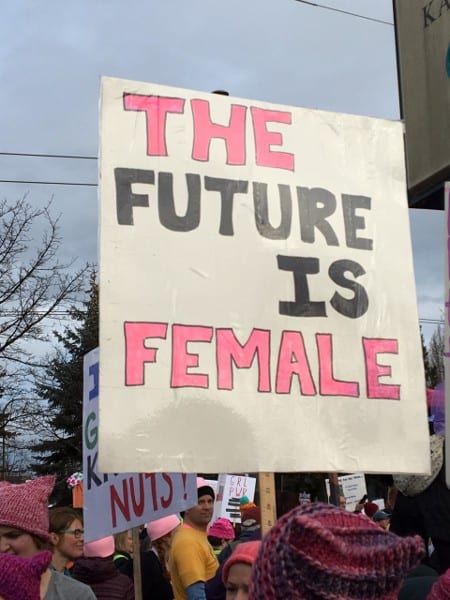 I was about 9 or 10 the first time I was thrown from a horse. Horses can be skittish, especially when they hear something but can’t see it. That was what happened on the trail that day, something moving in the brush. Before I knew it, I was on the ground and my horse was bolting towards the barn. It was the first time I had the wind knocked out of me, too.

When Donald Trump nabbed his electoral college win (not to be confused with the popular vote), it was as if my comfortable ride, cruising along in Seattle’s progressive bubble, jolted to a stop, knocking my wind out with it.

But Saturday’s march, which some estimates say drew nearly 175,000 people, restored my wind, and my voice too, as I chanted and whooped along with groups of sign-toting old women and young women dressed as suffragettes, little boys in Batman costumes, men in “pussy” hats, familes spanning generations, folks in wheelchairs. The collective display of resistance—to the bigotry, facism and xenophobia that has bubbled to the surface alongside Trump’s rise—was really something to see. This is what makes America great: All of its people, people of all ages, races, orientations and abilities, coming together. That the demonstration went off without a hitch or altercation, that voices were raised in solidarity and not rage, gave further creedence to the issues that gathered us together. I mean, I have never seen such a mass assembly of homemade knitwear in my life; how could a bunch of people wearing handmade hats be wrong?

Saturday I was reminded there can be an upside to getting your wind knocked out: in the moment it takes you to catch your breath, have a good look around. That day on the trail as I sat stunned and gasping, I spotted a doe and her fawns—that noise in the brush—trepidly coming out of the woods. Last Saturday, in Seattle alone, the scene was over a hundred thousand peaceful protesters, holding hands, trading high fives and united in a common hope. GWENDOLYN ELLIOTT

Kindness: it’s a quality that is far too underappreciated in this day and age, seems particularly fleeting and, therefore, precious. Many of us have experienced complicated feelings of grief in the wake of the election results. My own grief has taken many twists and turns, but has held steadfast to an undercurrent of raw anger; an anger at others and at myself that I don’t think will ever fully go away. Anger, specifically when expressed by women and people of color, is often seen as a negative. But in our current times, I don’t see anger as a sign of being out of control. I see it as a form of passion, a way of caring so much that it lights a fire inside that cannot be held within the body any longer. 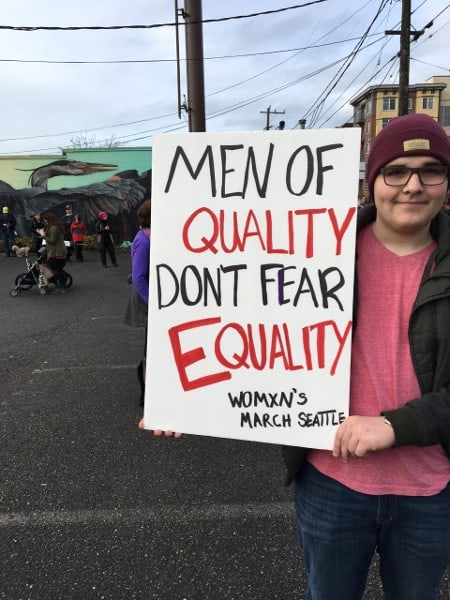 On Saturday, I was prepared to see anger, but I was disarmed to find something else: a transfiguration of pent up, sharp emotion into calm passion. Typical Seattle, where else could spirit appear so serene? The thing about kindness is that it’s not ostentatious, but gentle. The quietest gestures have some of the deepest resonance. And that’s what I saw: people being kind to one another, simply, quietly, gently. Strangers reached out to each other with conversation, humor, comfort and even snacks! Policemen, window washers, firemen, bus drivers and others at work smiled and waved. Marchers contributed to local businesses and those businesses supported them right back (thanks Phở Bắc for letting us charge our dying phones while we gratefully dined on your phenomenal pho and iced coffees). There is no one magical march that can singlehandedly change the course of things to come, and there’s a tremendous amount of work to be done, but I needed to see people being kind to each other—because seeing is believing—and I think our country needed it, too. Stay angry, but above all else, stay kind. NIA MARTIN 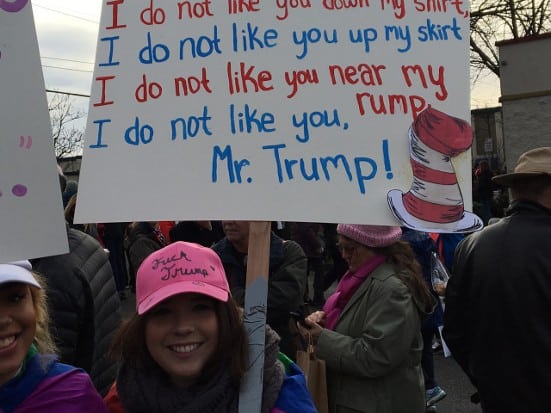 The sheer numbers of marchers were amazing, and the camaraderie among them infectious. I really loved the signs, though—so many of them creative expressions of the fears and frustrations of the marchers. Wouldn’t it be great if someone collected and exhibited them? It would be an inspiring tribute to this event. VIRGINIA SMYTH 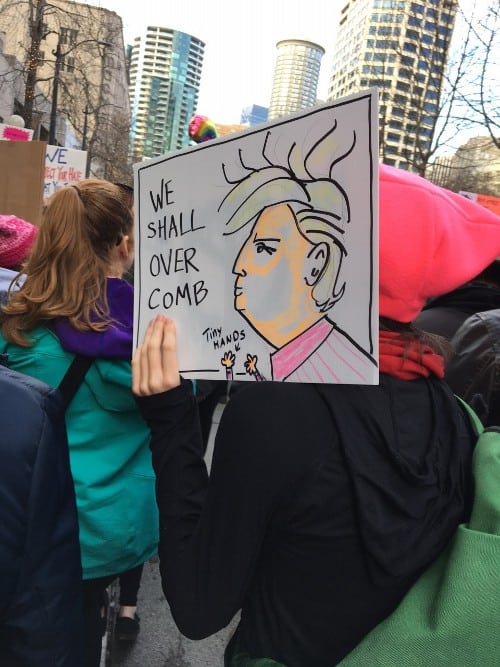 I was blown away with the peacefulness and positivity of the march. It felt more like a cathartic victory rally than a protest with everyone coming together for the same reasons. Really empowering and just the shot in the arm we all needed to continue fighting the good fight.

A friend did, however, note an important point, as she observed police in soft gear and on bicycles, whereas at the Black Lives Matter march two months ago, they were outfitted in riot gear. “Why police lining the route and following every move of the BLM marchers but not this day?” she asked. “We know why. It’s not okay.”

For every small step forward made on Saturday (and there were millions of them around the world), perhaps our boldest leaps are still ahead. RACHEL HART 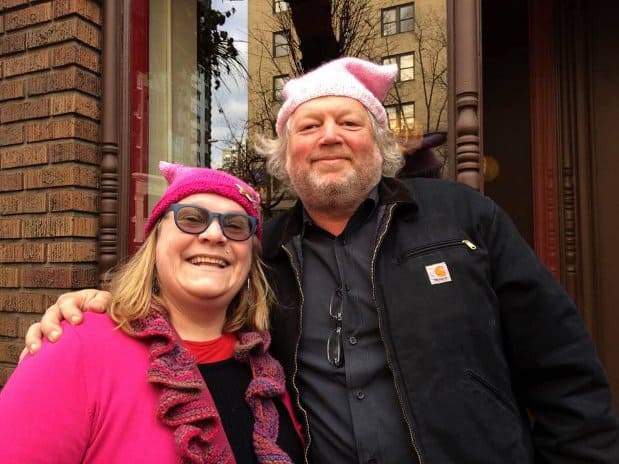 Seattle magazine reader Jenni Kane knitted 29 hats for the event; she gave her last one to Tom Douglas, pictured here with her