Golden Beetle Could Be Better 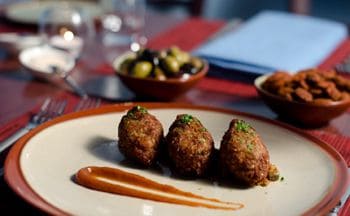 Maria Hines’ Northwest cuisine–focused Tilth was only the second Oregon Tilth–certified organic restaurant in the country when it opened in 2006.  Within a year, the New York Times restaurant critic Frank Bruni called it one of the 10 best new restaurants in the country, and Hines has since been named the James Beard Best Chef Northwest. So when the chef announced she’d be opening another restaurant, well, the good news spread like wildfire.

Inspired by her travels through Turkey, Lebanon, Egypt and the eastern Mediterranean, Hines promised homemade couscous, slow-braised tagines and all the fragrant, layered spices of the region. But during my meals so far at the Golden Beetle, which opened in February, I’ve found that most of the flavors fall short of their full potential. While the kale with harissa and almonds ($6) and the buttery local albacore tuna ($22) were delicious, the lamb tagine ($24) with green olives, while tender and hearty, lacked that divine briny tang green olives provide. The couscous ($6) could’ve used more lemon; the cod falafel ($6) was a little dull. A squeeze of lemon, a punch-up of harissa, a smattering of fresh mint: most of the dishes needed a wake-up. The space itself is very pretty: colorful hanging lanterns and images captured during Hines’ travels hang on cerulean walls; a custom glass tile mosaic decorates the large oven. It’s a nice space; as the food gets better, it’ll be a destination.