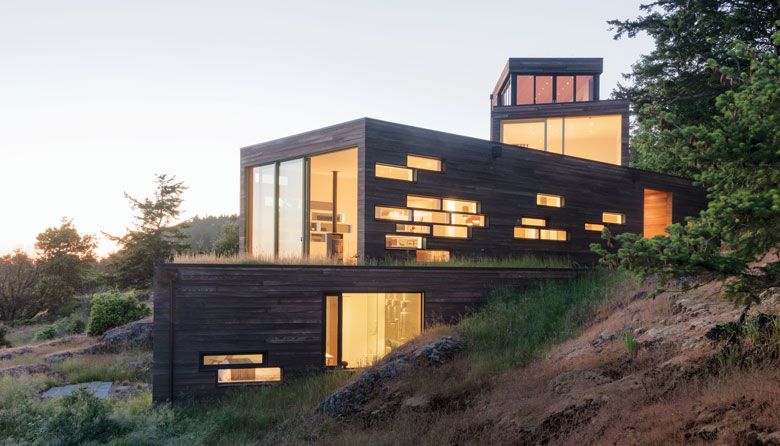 All photos by Eirik Johnson

The story of how this home—a quad-level San Juan Island stunner with sweeping views from the island’s wind-whipped west side—came to be reads like the screenplay of an Oscar-winning blockbuster. It’s May 1978. Young couple Paul and Bonnie Bunning, New Hampshire natives recently relocated to Spokane, find themselves on a rain-drenched bike-camping trip on Vancouver Island. The weather drives them to reroute to Friday Harbor on San Juan. They immediately fall hopelessly in love with the place. The next day, a real estate agent takes them to an undeveloped lot, the only property within their budget. It’s in front of this same property that Bonnie’s bike gets a flat—one that stubbornly resists being fixed—as they are trying to make the ferry back. VIEW MASTER: Distinguishing slot windows were used along side walls in the main living spaces—some open to let in island air and others have LED light strips to add ambiance at night.

How can this not be kismet?

The Bunnings ended up buying the lot, 4 rocky acres with a ramshackle garage that contained a loft with a mattress but no running water or electricity and with minimal insulation. Still, they developed a tradition, over the summers and on long weekends, of visiting the island from their home in Spokane, and later in Olympia, bringing their two daughters for “glamping”—hardly the same as the luxe accommodations that term evokes now—and gathering family to cook Thanksgiving dinner on a woodburning stove. The top floor offers the most dramatic wrap-around views.

While it was romantic to rough it in their 30s, the Bunnings are now retired and in their 60s. A number of years ago, when Bonnie missed the last couple of rungs on the loft’s ladder in the middle of the night—a minor injury—it solidified what they had been discussing: building a proper home on their lot.

They chose Seattle-based Prentiss Balance Wickline Architects to work on the property. Celebrated architect and principal Geoff Prentiss says the job was supposed to be his “swan-song house.” (He laughs at this, though, and says the house took so long to be built, he finished a couple of other projects in the meantime. He’s still not entirely retired.) “We had a clear vision of the important aspects of a house, but not the structure itself,” says Bonnie. Paul, a lifelong writer and artist, actively worked with Prentiss and fellow principal designer Dan Wickline to work on the ratios for the house, such as how the floors related in size to one another, to achieve maximum aesthetic appeal. Ultimately, they wanted the wow factor to come from the views more than the structure itself. “Most of all, we wanted the home to reflect and pay homage to the old cabin, which was our center, an almost magical or sacred spot,” Bonnie says, referring to the property’s original garage. Prentiss’ vision resulted in a 3,300-square-foot house built into the rocky landscape like a series of cascading boxes. He realized that if each of the four floors was positioned slightly differently, the floor below would act to block out views of the nearby subdivisions and developments that have popped up over the past 30 years. Each water-facing wall includes a huge sliding door, with narrow slot windows added for light and interest without eroding the view. The master bedroom, on the bottom floor, faces Port Angeles and the Olympics. The uppermost floor is the only one with 180-degree views—designed for sipping cocktails and enjoying the sunset. “It feels like you’re in your own private world,” Prentiss says. That little cabin still sits on the property, obstructing some of the view Prentiss tried so hard to preserve. But it’s understandable why the Bunnings are attached to it. They say they keep it for storage—there’s no garage, after all—and for Paul to paint in. But there’s a love story built into those rickety walls. PERSONAL TOUCHES: These rocks, two halves of the same boulder, were uncovered during excavation and couldn’t be moved; they seemed like the perfect addition given that Bonnie Bunning is a retired geologist. The home’s entryway was erected around them.