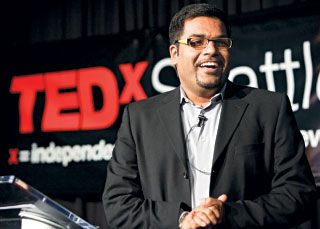 Hanson Hosein isn’t your typical academic. A law student turned award-winning producer turned NBC Iraq war correspondent turned documentary filmmaker turned digital communications professor, this husband and father of two has built a career on blazing his own path. In his latest role as director of the University of Washington’s Master of Communication in Digital Media (MCDM) program, Hosein is leading the charge to revamp curriculum and improve visibility of the program through local partnerships and increased community engagement.

In April, Hosein—who speaks openly about the importance of storytelling in journalism and the power of leveraging large-scale events to draw attention to his program—brought his world of new media to the masses by organizing Seattle’s first TEDx conference, a hyperlocal version of the national TED (for technology, entertainment, design) movement. “It was a home run….I could feel we’d created a new community,” says Hosein of the sold-out event.

It seems students are noticing the new energy at MCDM. Since Hosein became its director, enrollment in the program tripled, making it one of the growing number of self-sustaining academic programs at the UW, he says. What’s next? Hosein hopes to tap into the energy of TEDx by creating a new event, Four Peaks, a regional technology, media and innovation conference to rival Austin’s famed South by Southwest. “I love Seattle,” he says, “because I feel like I have the freedom and independence to tell my own narrative.”