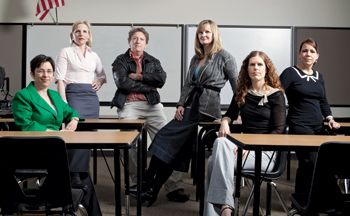 School’s out this month, but for a group of local education advocates, the homework never ends. With recent leadership and budget crises fueling an environment of mistrust, protecting the interests of the more than 47,000 students served by Seattle Public Schools has never been more difficult—or more crucial. Meet the citizen watchdogs who remain vigilant year-round

Fifteen years ago, Seattle public school parent Lisa Macfarlane was pumping gas when she heard that a school levy had failed. Her outrage prompted her to rush off—with the gas pump nozzle still in her car—to organize a coalition of public school supporters. Thus, the League of Education Voters was created.

Picking up where your mother’s PTA left off, today’s education advocates are raising money, lobbying, empowering communities and filling the information gap left by dwindling newspaper education beats. They hound hot-button issues and offer parents timely, critical information in digestible, electronic formats. They are powered by passion—and often, an army of volunteers.

School officials say they welcome this public outreach because it complements their own communication efforts—for the most part. “I’m happy there are multiple, well-organized voices working on advocacy and sharing important information with parents,” says Seattle school board vice president Michael DeBell. “Sometimes a chorus of critical voices doesn’t add to a healthy discussion, but overall, we are fortunate to have a variety of groups with a variety of viewpoints.”

With the exception of the 100-plus-year-old Seattle Council PTSA, Seattle’s education advocacy groups are young and redefining their missions to remain in step with the issues of the day. Leaders of these six groups say the crisis in public education makes the system ripe for reform and that there is room for all of them—and then some.

LEV is the only statewide education advocacy group that covers the full spectrum of education, from early learning through college. It publishes the annual Citizens’ Report Card on Washington State Education, and has been instrumental in the passage of legislation to reduce class sizes and allow school levies to pass with a simple majority. “If I could change one thing about Seattle’s school district, it would be to create a culture of success for the next step of education after high school, in which every student is prepared for higher education,” says Korsmo, 48, a former teacher and the parent of an incoming Seattle public school kindergartener. LEV’s creator, Lisa Macfarlane, is now a senior adviser, and LEV employs a full-time legislative director, maintaining an active presence in Olympia. Of LEV’s key accomplishments, Korsmo says, “Passing ‘Simple Majority’ is the big one, but passing HB 2261 is also significant. When fully implemented, it will reshape public education finance and accountability, as well as expectations and outcomes for kids, in a huge way.”

Born out of frustration over the 2006 school closures, this blog now covers a plethora of school district issues. Westbrook, veteran of “almost every PTA job,” including co-PTA president at Roosevelt High School, served on the school board’s 2006 Closure and Consolidation Committee. She—along with co-blogger Charlie Mas—currently devotes four to six hours each day tracking issues and writing about them, despite the fact that her own kids have graduated. School board vice president DeBell, a regular reader of the blog, says he appreciates the level of detail provided by Westbrook and other bloggers on the site. Westbrook, who occasionally also works as a freelance writer, has a message for parents: “Don’t be complacent. Keep up, pay attention and be an advocate for your child.”

A chapter of the national association Parents for Public Schools, CPPS Seattle was founded in 2006 amid concern that parent input was not considered in the debate over school closures. Since then, it has evolved into a network of parents and community members committed to improving the quality of neighborhood schools, and focuses on parent education and empowerment. Jones, 46, is a former teacher, current and former PTA president, and the parent of three Seattle public school students. She’s proud of CPPS’s success in empowering parents across diverse communities. “Parents are important partners,” she says, “but they need understanding, context and skills to be effective and have a constructive voice.”

Created by Jonah Edelman, son of Children’s Defense Fund founder Marian Wright Edelman, Stand for Children uses grassroots community organizing to try to change education policy by empowering and mobilizing local parents, teachers and community leaders. It endorses pro-education-reform candidates and pushes education legislation, such as this year’s failed Great Schools bill, which sought to make performance a factor in teacher layoffs.  “We play the political game aggressively,” says Campion, 34, a community organizer since 2002, who led successful campaigns in Portland supporting education funding and reform.  Campion says the group’s key achievements in Washington have been building a stronger base of education champions in Olympia and significantly improving teacher and principal evaluations, as part of an overall push to strengthen education legislation and close the achievement gap.

As the umbrella organization for Seattle’s 74 self-governed local PTAs, the volunteer-run council works to ensure two-way communication between its 14,000 members and the Seattle school district, and provides leadership training and education to local PTA units and councils. McGuire, 42, the parent of two public school students and an active PTA volunteer at her kids’ school, cut her teeth on education advocacy as a leader of the Northeast Cluster Coalition, which successfully advocated for new schools in northeast Seattle. She also served as vice president for the Seattle Council PTSA. In today’s fast-moving political arena, education issues have become more complex, McGuire says. “We strive to remain faithful to the viewpoints of our diverse membership and make sure we convey these to the district. Our goal is to make sure all voices are heard and speak up on behalf of the children.”

The alliance raises private funds for Seattle Public Schools and serves as its advocacy partner, but also plays the role of “critical friend.” One of 80 local education funds affiliated with the National Public Education Network, it convened the Our Schools coalition, a network of 35 groups working toward a strong professional teacher corps in Seattle. “We want a culture of high expectations at every level—teachers, principals, students, district administrators and community partners,” says Morris, 39, a marketing and communications professional, the daughter of teachers and the parent of two (soon to be three) Seattle public school students. Morris says the alliance’s key achievement has been leading the vigorous community conversation about how great teachers are supported, compensated and evaluated.