Today’s political climate means uncertainty for certain immigrants. But for many, America is still the country where dreams can be fulfilled and some local immigrant families are finding the pathway to achieve the dream is lined with rows of cannabis 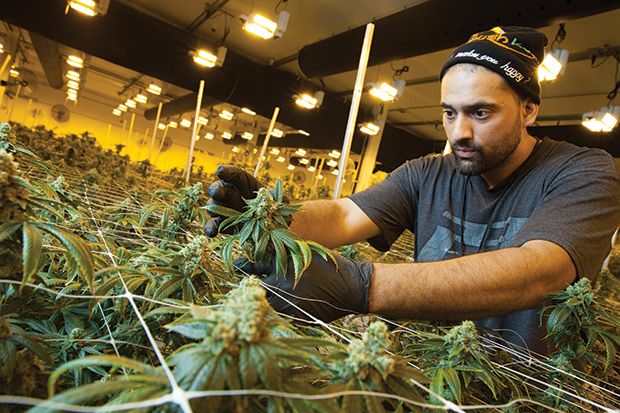 Even on the grayest Northwest day, Surjit Singh and his son, Sandip Saini, often put on sunglasses to go to work. It’s always bright and 70 degrees in the grow room of their 10,000-square-foot cannabis greenhouse, an unassuming building that towers behind Singh’s Indian grocery and convenience store, Intercontinental Foods, in central Bellingham.

An onlooker may guess it’s a storage facility, except for the curious fact that the large compost bin parked outside is always locked and under video surveillance. Inside, dozens of rows of marijuana plants, some standing more than 5 feet tall, soak in light from ultraviolet lamps. Workers use skin protection to prevent themselves from tanning as they work methodically down the rows, trimming leaves and checking buds for maturity.

Full-grown buds are sent down the hall to a drying room, where Singh, his wife and a handful of immigrants from Bellingham’s longstanding Indian community package the weed for sale in Washington’s legal marijuana market. They gossip in their native language of Punjabi, bhangra music blaring in the background, as they roll joints and stuff dried leaves into zip-close bags. Singh is an unlikely advocate for marijuana, given that he’s never even had a puff of the stuff. And yet, when Washington legalized cannabis in 2012, like thousands of other Washington residents, the 62-year-old Indian immigrant saw an opportunity. Unlike many of those other entrepreneurs, however, Singh saw starting a “grow op” as a chance to realize the American dream: owning a successful business that would allow him and his wife to stop working long hours, pay off their debts and put the family on firm financial footing.

Singh didn’t know much about growing weed then, but he was a farmer through and through. Before he bought a failing Bellingham gas station in 1997 and turned it into a convenience store, which he stocks with spices and Bollywood movies for the local Indian community, Singh had toiled on California grape farms under midday sun, planted cabbage during German winters, and harvested rice under brutal heat on his family’s farm in India. Growing indoor marijuana, comparatively speaking, felt like a breeze.

Singh recruited his 31-year-old son, Saini, to help with the business. They invested their life savings, secured a second mortgage on the family house and maxed out credit cards to build the $1.1 million indoor farm. Of cannabis farming, he says: “It was plants and greenery, what I have done my whole life. I thought maybe we can make money.

“I came from a poor family, and it was always on my mind to do something—to get to some kind of level of success,” he says.

They received their license to begin growing plants in April 2016, and “Khush Kush” was born. The name, a play on words, is an homage to their immigrant roots: “Khush” means happiness in Punjabi and Hindi, and the slang word “kush” refers to cannabis strains that originated in the Hindu Kush mountain range.

Image by Hayley Young
Surjit Singh used the land directly behind this convenience store for a marijuana farm, erecting a $1.1 million greenhouse on the property

Whereas the convenience store had afforded Singh, his wife and two kids a comfortable middle-class life, he hoped marijuana would help them strike it rich and break free of what had been a grueling work schedule at the store. He saw opportunity in joining a new market as it was taking off and imagined being able to retire from work altogether in a few years, free to spend months out of each year visiting family in India.

Nearly 3,000 residents of greater Bellingham are from India, Pakistan or Fiji, and most are recent immigrants—part of the influx of South Asians to the greater Seattle area. Indian immigrants first arrived in Bellingham in the early 1900s as laborers in lumber mills, but a mob of white men drove those early migrants out. It wasn’t until the 1980s that Indians began returning to the area, according to Satpal Sidhu, a Whatcom County Council member who, like Singh, practices the Sikh religion.

Sikhs are among the most visible members of that immigrant community, because many of the men don turbans to wrap their uncut hair. The Sikh faith originated in Punjab—the northern Indian state where Singh grew up—and most of Bellingham’s Punjabis are Sikh. Image by Hayley Young
When big enough, they’re moved into a bigger growing base

Today, a majority of the estimated 700 Sikh families in Whatcom County are small-business owners, and a quarter of those businesses are in agriculture, Sidhu says.

A few others in the community have also joined the marijuana industry. Down the street from Khush Kush is Mt. Baker Growers, owned by sixth-generation farmer and immigrant Daljit Nagra, who for many years has operated a blueberry farm in Whatcom County. His family farmed in Punjab before that. But for Nagra—and other Sikhs in the Bellingham community—entering the cannabis business has meant overcoming barriers that not all growers have.

Nagra’s family refused to grow marijuana on its farm, not wanting to grow cannabis near other crops and near their children. Nagra, who uses marijuana medicinally, said he also felt conflicted about it, but that the opportunity was too lucrative to pass up. So he also built an indoor warehouse on his own land, where he had been operating a trucking business. Like Singh, Nagra believes that marijuana could be very lucrative in the long run, given that the state is limiting the number of licenses and thus competition. Although his businesses have helped him sustain a level of financial success, Nagra dreams of freeing his three young boys from ever worrying about money.

“This business could change our future generation’s lives,” he says.

Singh faced similar pressure from Indian relatives to avoid the pot business. Marijuana literally grows like a weed in Punjab, but many Sikhs do not use it, avoiding tobacco and drinking as well, because of their faith. But Singh said selling marijuana felt no different than selling alcohol in his convenience store—and both decisions came down to a pragmatism about what it would take for him to succeed in America.

“If I don’t pay the kids’ loans, then I am not a successful father,” Singh says plainly.

When he left his Indian village at the age of 25, shortly after becoming engaged, it was with the goal of improving his future. Though he didn’t have the necessary papers, he found work on a vegetable farm in Germany, where he stayed for six years before arriving in California on a visit visa. He worked under the table, pruning and cutting grapevines for $5 an hour, enough to scrape together a living and send money home. Image by Hayley Young
Harvested and dried cannabis is measured, weighed and packaged for sale

In 1987, Singh received a temporary work authorization, which allowed him to work for better pay as a dishwasher in an Indian restaurant. He also applied to have his family join him.

He had gotten married on an earlier visit home from Germany, and his wife gave birth to their daughter in India. It was two years before he got to hold the baby, and it wasn’t until late in 1995 that the family—which by then also included Saini—was permanently reunited in the States. By then, Singh had moved to Seattle and was working at a Greenwood convenience store with occasional shifts at a nearby Texaco gas station.

He owned a video rental store in Shoreline and managed a motel on Aurora Avenue before moving to Bellingham to run an Exxon station in 1997. When one of the gas tanks began leaking, the owner sold the store and about four acres of land to Singh soon after, under an agreement that prevented him from operating a gas station on the property until the spill had time to dissipate.

Instead of selling gas, Singh tailored the station’s convenience store to the area’s growing Indian population, saving customers the trouble of having to cross the Canadian border to stock up on goods from the Punjabi stores in Surrey, British Columbia. He and his wife worked alternating shifts at the store, and he sometimes slept there as they devoted all their waking hours to making it a success. Image by Hayley Young
Joints are bagged by type of strain; the family plans to have 20 strains exclusive to their brand

While the store grew, he imagined ways to capitalize on the adjacent land he had purchased. He considered a Costco-style warehouse, or a movie theater, but kept saving up for the right opportunity. When marijuana was legalized, he felt like he had finally found it.

Getting the business off the ground proved more challenging than Singh had anticipated. He took a $500 weekend workshop on how to apply for the license to grow cannabis, but was overwhelmed by the forms and questions involved. Singh solicited help from his 33-year-old daughter, a film director in Los Angeles, and Saini, who left a producing job at ESPN to help with the business.

“My dad has a technology barrier, so he isn’t able to grasp certain things. It was perfect for me to be my dad’s backup,” Saini says. He was also drawn to the idea of launching his own business, the path his father and many other Indian immigrants chose as a way to “set their own destinies.”

“In America, you have to try to do something for yourself. Otherwise, there is always somebody above you writing your paycheck,” he adds.

Saini handles most of the front-facing aspects of the business, including meeting with owners of retail shops to convince them to carry Khush Kush products. The brand is now on the shelves at numerous Seattle-area retailers.