The eighth installment in the Neighborhood Walk series 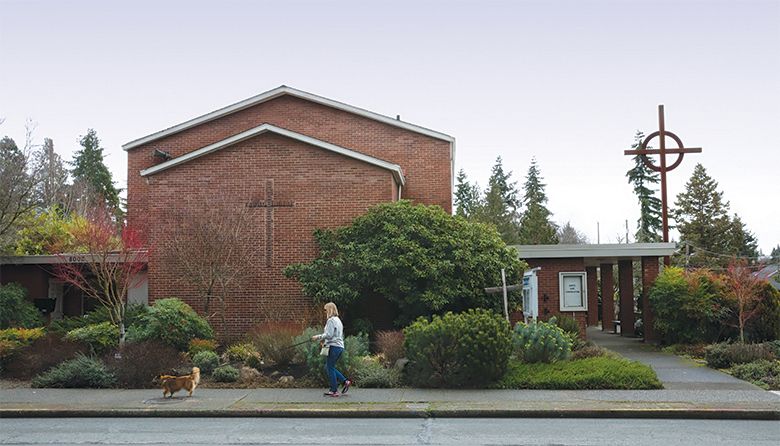 Regulars start trooping in for coffee, pastries and crêpes soon after Cafe Javasti opens at 6 a.m. The cozy northeast Seattle coffee shop, in one of two commercial hubs in Seattle’s Wedgwood neighborhood, is one of many small, locally owned businesses housed in mid-century buildings along the 1.5-mile stretch of 35th Avenue NE between NE 95th and NE 65th streets.

The 35th Avenue thoroughfare is a busy transportation corridor; the Seattle Department of Transportation says it averages 12,500 drivers daily, who head north toward Lake City Way or south to Interstate 5 and State Route 520.

Yet, even with new larger houses and townhomes replacing single-story professional offices, Wedgwood retains a mid-1950s, small-town, Leave It to Beaver patina. The neighborhood’s predominant single-family zoning helps, but another factor may be the high number of gathering places along the way: restaurants, coffee shops, a post office, a library and, along the eastside of the street, six houses of worship—this in a city well known for slack attendance at such places. On 35th Avenue, private faith is part of the public space. 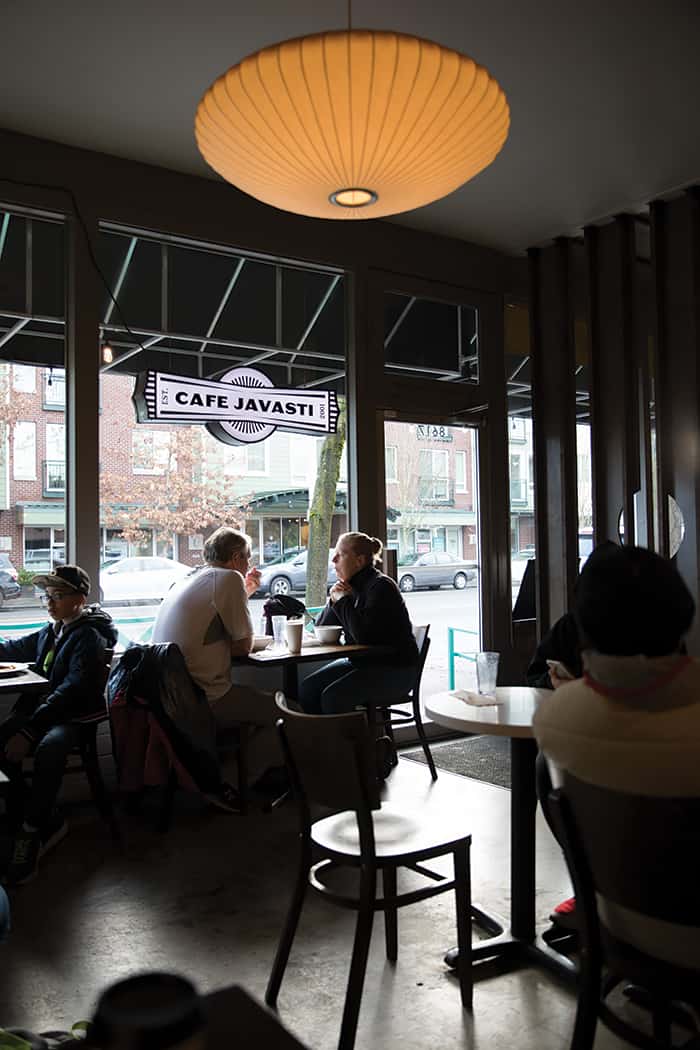 GATHERING PLACE: Cafe Javasti, which attracts a crowd from when it opens at 6 a.m., anchors one of two commercial hubs in Wedgwood

Greg Di Loreto and Rich Scalfani, lead pastors of the OneLife Community Church near 95th Street, are regulars at Cafe Javasti. Bearded, smiling men, they say they use Javasti as their “third place,” where they connect with people from their church and the surrounding community. “We know everybody there,” says Di Loreto. “They are like our family.”

An Assemblies of God–affiliated church, OneLife hosts a preschool and a youth drama school in its 1954 building. It hosts a Sunday dinner in the Brig at Sandpoint for the community of people living in the low-income housing at nearby Magnuson Park. “We want to have a presence in our neighborhood that is really tangible to people,” Di Loreto says.

The Rev. Tim Clark from Our Lady of the Lake Catholic Church at 89th Street frequents Cafe Javasti, too. The soft-spoken 66-year-old has been the priest at Our Lady since 2004, and now finds himself presiding at weddings for children he baptized. The church, a presence on that corner since 1961, is closely connected to the community with a school and an events center that includes a gym, a multipurpose room and an outdoor playground that is open to the neighborhood. “What a great way to open our doors to the larger community,” Clark says. Clark brought the Wedgwood Arts Festival to the church three years ago when the event needed a new venue, and the church also offers a regular public film series on social justice issues. “Spirituality isn’t elitist or private,” he says, “it is deeply social.” 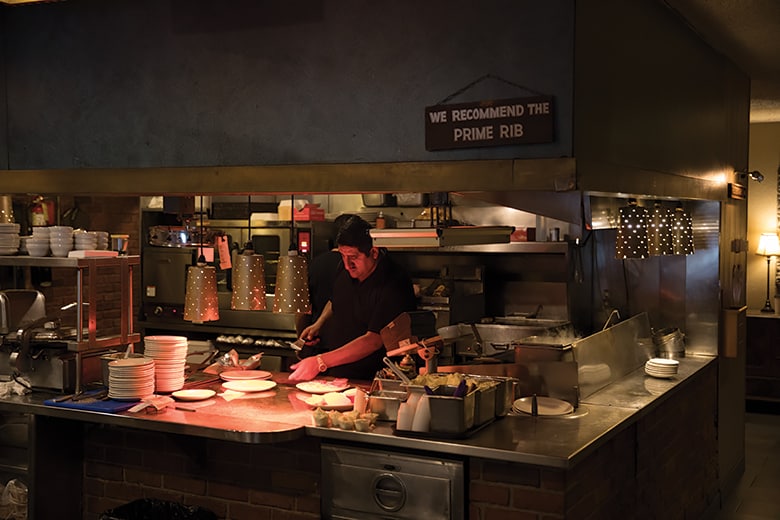 A few blocks farther south, past the Rite-Aid and the QFC, is another community gathering space, the Wedgwood Broiler, where you can find a good Manhattan, Clark notes. Stepping in here is like stepping back in time. It’s dim, but not dark, with booths filling most of the dining room; a low-key lounge with a long wooden bar is on one side, and cozy U-shaped booths line the opposite wall. Opened in 1969 as the Sir Wedgwood Broiler, its name was shortened in 1973, according to neighborhood historian Valarie Bunn (see sidebar below).

“I think, for longtime customers, it is what they are comfortable with, what they are used to,” says current owner Derek Cockbain of his clientele. “With the newer customers, they don’t really see a place like this. It’s not your typical bar.” Cockbain grew up in the neighborhood (his parents still live up the street), and with the restaurant. He started working here as a dishwasher in 1981 and bought the place in 1996; aside from adding a few TV screens in the bar, he has no plans to remodel. The booths are a big selling point, he believes. “You don’t see a lot of bars that you can have this kind of private booth. You can have a conversation that is somewhat private.”

Once, his restaurant might have been called old, but today, as the city is reshaped around us, the decor and the setting feel classic.

The Wedgwood Broiler has something that’s rarely found elsewhere in the city: relatively easy parking out front and on 35th Avenue NE. That may change. The street was just repaved and, controversially, re-striped. The road diet and proposed separated bike lanes for part of the stretch aroused organized opposition and forced mediation with the mayor’s office. Neighborhood supporters and opponents of the redesign argued over pedestrian safety, reduced parking and how to share the street.*

Just a few more blocks south, past Hunters Tree Farm—a popular spot during the Christmas season, when trees are sold—and the Wedgwood Presbyterian Church, the oldest congregation in the neighborhood, is the second commercial hub along 35th Avenue, at 75th Street, where it crosses into the Ravenna neighborhood.

When opponents to the city’s 35th Avenue proposals needed a community meeting space, Pastor Trevor Mankin offered to host them at his church, Messiah Lutheran, located at 35th Avenue and 70th Street. There is a lot of passion about this issue on both sides, Mankin says, but “a lot more than there needs to be. It seems like everybody got so worked up.” His personal concern: that loss of street parking will be hard on his older church members.

Like most of the religious institutions on the street, Messiah Lutheran has a big footprint; its large front lawn is used by neighbors to exercise their kids and dogs. Mankin wonders if that lawn might need to be replaced with a U-shaped drive if street parking disappears. 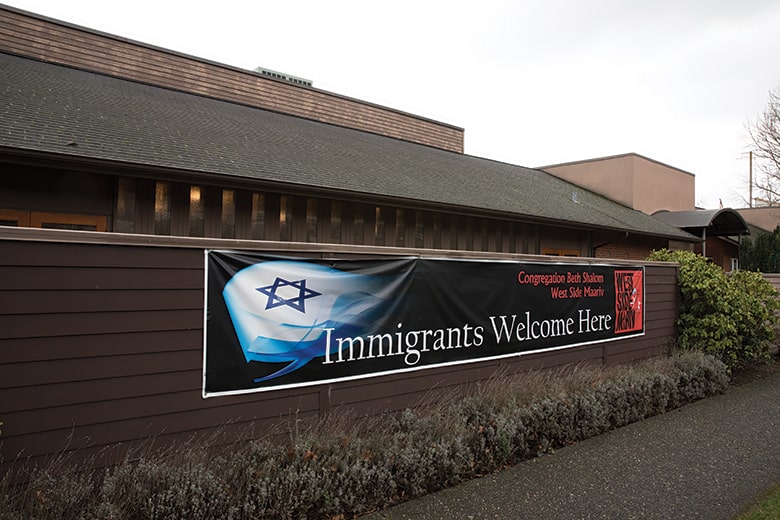 Change is inevitable, of course. One jarring sign of that change is at Congregation Beth Shalom—next door to Messiah Lutheran—where an “Immigrants Welcome” banner on the street side invites visitors, but also where a uniformed guard greeted me at its door on the Sunday morning I visited. Out of caution, security has grown tighter at Beth Shalom over the past few years, according to Andrew Cohen, a lay leader and immediate past board president of Beth Shalom. The Department of Homeland Security has provided security grants for religious institutions around the country. Cohen says they will probably put in shatterproof glass and concrete bollards in front of the door. But despite security concerns, Cohen says, the congregation has always felt welcomed in the neighborhood, ever since it purchased the building from the University Unitarian Church.

The congregation, which recently celebrated its 50th anniversary in the neighborhood, has grown over the years. It owns four houses to the north of the synagogue, and it may expand again. However it grows, the congregation is mindful of its footprint in the community, says Cohen. “Such a large percentage of our community lives in this neighborhood,” he says. About 40 percent live within walking distance. “They walk on 35th, they shop on 35th. Their dry cleaner is here. They go to Safeway, they go to Starbucks, they go to Grateful Bread [bakery].” 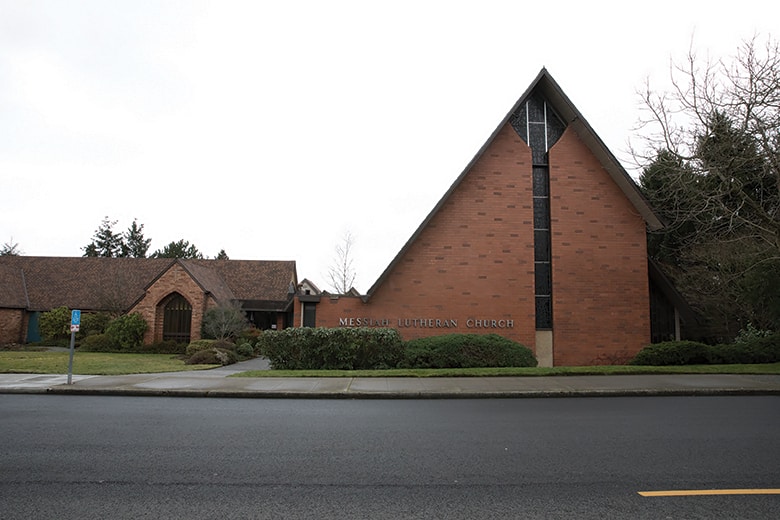 TOGETHER IN WORSHIP Among the houses of worship on 35th Avenue is Messiah Lutheran Church, right next to Congregation Beth Shalom

Nearby, the University Unitarian Church, designed in 1959 by renowned Seattle architect Paul Hayden Kirk, is finishing up a major renovation. Kirk’s iconic modernist flying buttresses remain in place as the church gains square footage and energy efficiency, according to church member Lee Warner, who chairs the building committee. Three church-owned single-family homes that Warner says have become too rundown to repair and maintain in a cost-effective manner may be demolished, pending city approval. Warner says that demolition would provide space for further expansion in the years ahead.