Market experts share their opinions on Seattle's meteoric future as a global city on the rise. 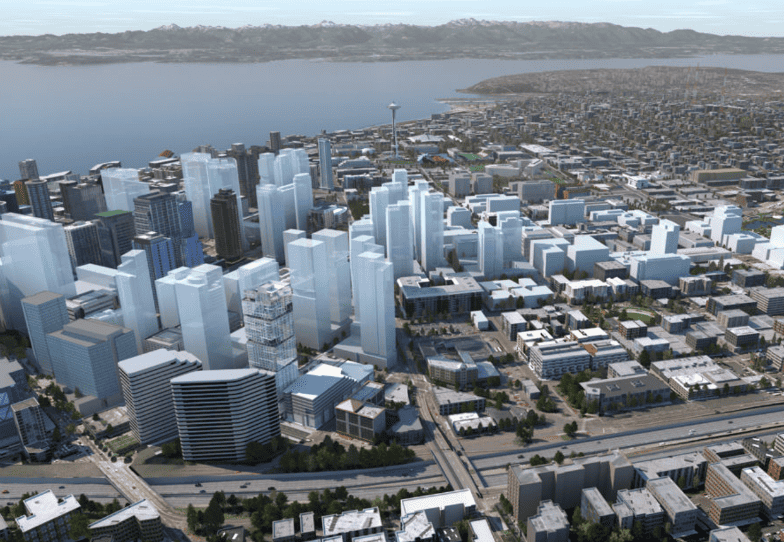 Scores of guests assembled at MG2 Architecture in downtown Seattle during an evening reception on September 28th about the future of the Seattle and Bellevue metro area in the next decade. The town hall-like event was a continuation of provocative conversations started during the BISNOW “State of the Market” event hosted earlier in the week, which was attended by more than 400 industry stakeholders and local media.

“This is the first time we’ve aggregated opinion leaders about where we’re headed as a region and the trajectory is eye-opening,” said John Spear, Associate Publisher with Seattle magazine and moderator of the panel discussion.

Kicking off the conversation with a macroeconomic overview of the region’s robust job and population growth, was Brian O’Connor of O’Connor Consulting Group. He offered perspectives about historical and projected housing cycles with a focus on the balancing of new owner demand vs. rental demand. 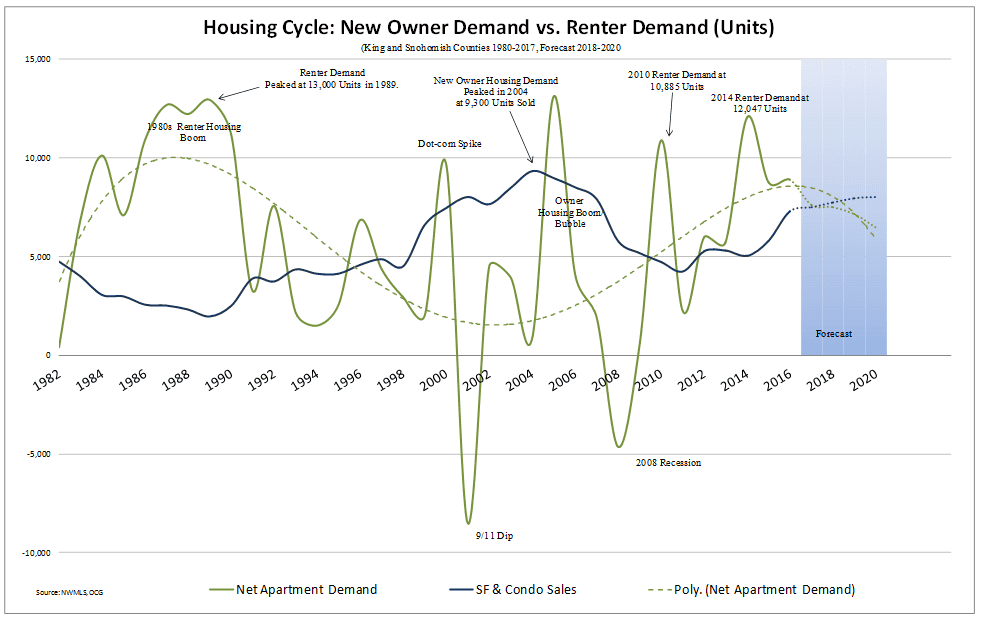 Brian O’Connor of O’Connor Consulting Group has tracked the housing cycles in King and Snohomish Counties since 1982 and predicts pent up demand for home ownership.

During past economic cycles, O’Connor found the demands trending for ownership and rentals were typically offset, but in more recent years both have been growing.

Another finding was how concentrated the demand for all product has been in downtown Seattle and other urban areas. This compares to past cycles when it was more broadly distributed throughout the region. 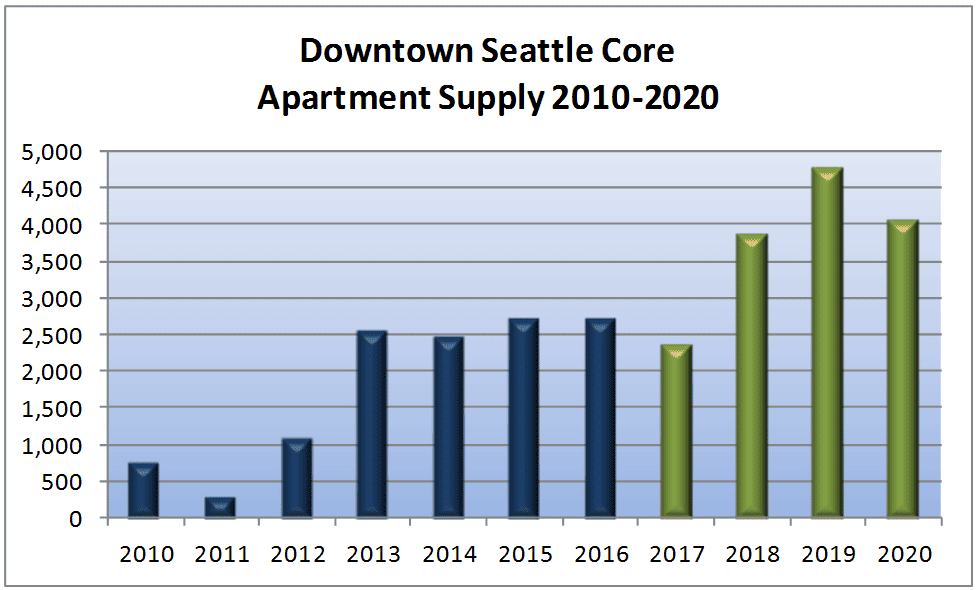 Graphs by O’Connor Consulting Group indicate the boom of apartment housing in downtown Seattle, while projections for the Millennial demographic, the largest population cohort in the region, will put significant pressure on the housing stock, especially in light of limited homeownership options. To be sure, boundless job growth within the local tech industry, most notably by Amazon, has eclipsed even the Bay Area, creating unprecedented demand for rental properties. O’Connor is concerned that the region is not generating enough housing, especially in single-family neighborhoods.  Permit activity in King and Snohomish Counties for new houses has plummeted in the current economic cycle notwithstanding steady declines in mortgage interest rates. Conversely, multi-family permit activity is setting new benchmark records in the region in what the experts are referring to as the urbanization of the Pacific Northwest.

Dylan Simon, who specializes in apartment investments, described an environment in downtown Seattle where rising rents (climbing 50 percent in the current decade) and extraordinary levels of global capital have created a modern-day gold rush of investment interest in apartment buildings.

“The great majority is in the urban core of Seattle,” said Simon. “We have this technology ecosystem and that’s creating a real vibrancy for companies that were based in Silicon Valley to actually move to Seattle and grow here.”

According to Simon, average rents in Seattle are about $2,000 compared to San Francisco where they are twice the cost. He said average salaries are about the same (less than 5 percent difference) after factoring differences in taxation and cost of living. Buying a house and renting a class A office in Seattle is also about half the price compared to the Bay Area. Therefore, doing business and residing in Seattle makes a great deal of sense; hence, employers are moving here and attracting thousands of employees. Many will choose to rent, for a while, but Simon believes Millennials will couple up, choose to have children and seek out ownership opportunities. All of those new apartment buildings are incubating future homebuyers.

“These economic trends are going to put us in a class of cities like New York, Boston and San Francisco,” adds Simon. “With that, we’re going to get big city problems and we’re going to have to deal with those problems along with the benefits.”

Dean Jones of Realogics Sotheby’s International Realty addresses the leadership panel and attendees at the FutureCast Forum on September 28th.

The panelists addressed other common concerns, such as transportation and housing affordability. Dean Jones, who lived in both Vancouver, B.C., and San Francisco, shared that Seattle has similar geographic constraints and is following in the footsteps of its West Coast peer group.

“Seattle is effectively an island with very limited ingress and egress for commuters,” said Jones. “We don’t currently enjoy a subway or expanded light rail system.  We have small town infrastructure but global city opportunities.”

Jones observed the high-density region of Seattle and Bellevue that’s bound between SR-520 and I-90 is effectively 2 miles by 10 miles, about the size of Manhattan.  He referred to Lake Washington as the region’s Central Park and suggested immigration and development trends that played out a few hundred years on the East Coast may be playing out now in the Seattle/Bellevue area now.

“Consider how the cities of New York, New Jersey, New Hampshire and much of New England was viewed as the ‘New World’ for European expats- immigrants and investors were coming out west for a better life and opportunities,” notes Jones. “I see that happening with Asian nationals favoring our West Coast gateway cities – does this make us New Asia?” 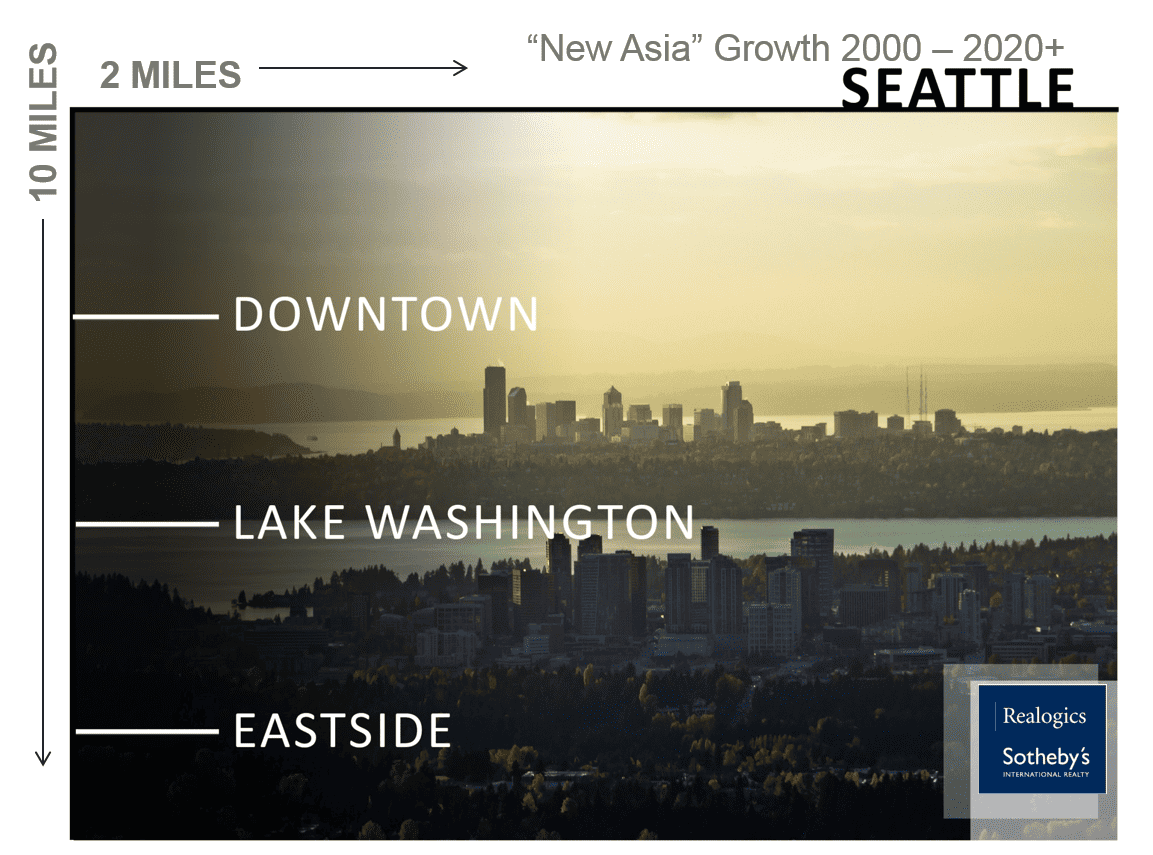 Jones said many of the new projects being proposed in downtown Seattle are, in fact, international developers, including those from Canada and Asia (including China, Hong Kong and Taiwan).

Nowhere is this level of investment and change more pronounced than the burgeoning East Village neighborhood west of I-5 and along both sides of Denny Way.

Jones agreed with O’Connor and Simon that there’s an undersupply of for-sale housing in downtown Seattle, especially at more affordable price points below $700,000. He concluded that for the current decade, only 6.5 percent of the 25,115 new units being delivered in downtown Seattle will be available for sale and two-thirds of what’s under construction today as condominiums by 2020 is already presold. Jones presented graphs illustrating the relatively small number of condominiums being built in downtown Seattle while most of what is under construction is already presold. Other statistics were shocking. Downtown housing prices are climbing with resale properties spiking 37.7 percent during the summer of 2017, over the prior year, while resale volumes fell 9 percent on dwindling inventory. Just 43 resale units were listed for sale with a median asking price of $1,150,000 and more homes were pending than new listings being added, according to NWMLS statistics.

“The 36-and-under crowd is the largest buyer demographic,” said Bennett. “We see a unique niche to fill. The companies that figure this out will be doing a majority of the business.” Attendees of the FutureCast Forum at MG2 Architecture in downtown Seattle on September 28th.

The search for affordability introduced several alternative markets to downtown Seattle and Capitol Hill. The panelists discussed the future of “boom-bergs” or emerging urban centers such as Columbia City, Ballard and Redmond that are becoming independent real estate microclimates attracting new residents and businesses alike.

Maria Royer confirmed these new retail nodes are challenging traditional shopping districts. First-to-market businesses are choosing these alternative opportunities like the Urban Kirkland project – a 1.2 million square foot mixed-use development that her firm is representing. She says growth is happening where there’s a walkability score.

“Main Street will never go out of style,” said Royer. “We take a lot of pride in creating unique and different retail nodes. There are a lot of people who don’t want to shop in a mall.” In terms of design trends, Jennifer McCullum drew upon recent features in GRAY magazine to suggest where architecture and interior design is headed.

“The influx of the population and the development that’s happening here – the effects of that certainly translate to design as well,” said McCullum. “There’s only so much land that can be developed so we’re having to see a real creative use of public and civic places to be able to give back to the community.”

Her top predictions ahead included greater efficiencies in space planning, a sharing of community spaces, further advancement in green development practices and programming a healthy home. Much of the discussion by the FutureCast Forum members was also captured in a newly published feature in the Puget Sound Business Journal – download a PDF here. 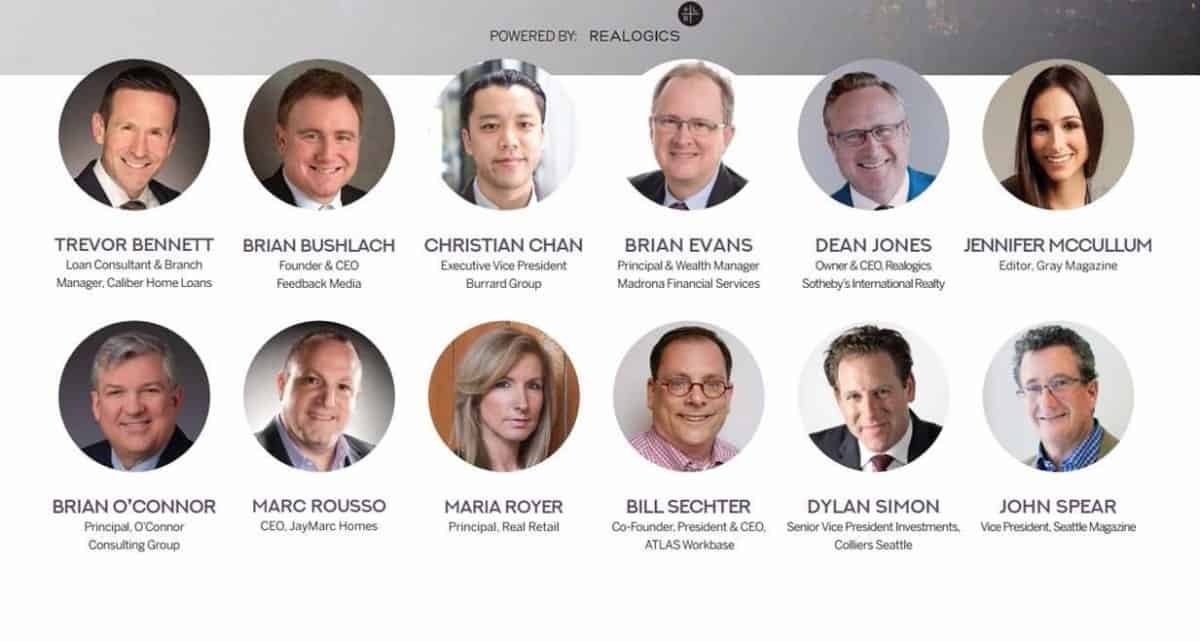 This is just the beginning of the conversation, register now at Seattlein2020.com to be notified of updated information and insight, as it becomes available.