We’re hearing more these days about “wines of place”—wines that reflect the terroir of a certain vineyard in addition to a larger winegrowing region. In Washington, winegrowers overall are becoming known for hefty reds and lush whites that reflect the heat of the Wahluke Slope or Red Mountain, for example, but also have a balancing acidity that comes from the shift from hot days to cool nights.

But every hillside is unique, and that is partly what the system of American Viticultural Areas (AVAs) is all about: distinguishing a particular area—large or small—from surrounding areas by its climatic, geographical and other characteristics. These “appellations” also help winegrowers set themselves apart in the marketplace. (That’s why a producer can’t call a sparkling wine “Champagne” unless it is from the Champagne region of France.)

So what are the styles emerging in Washington? This is the focus of this year’s eighth annual Seattle magazine Washington Wine Awards—highlighting wines from some of our state’s key AVAs, including Columbia Gorge, Columbia Valley, Horse Heaven Hills, Lake Chelan, Puget Sound, Red Mountain, Wahluke Slope, Walla Walla and Yakima Valley. The results enlighten all of us on what’s being produced from some of the new—as well as some of the older—AVAs in Washington.

Red Wine of the Year
Avennia 2010 Arnaut Syrah, Yakima Valley, Boushey Vineyard, $45
This wine rose to the top of its flight for its “beautiful nose” of ripe raspberry, cherry and spice, with a “vivacious” brightness and long finish. Although it is winemaker (and this year’s Winemaker to Watch) Chris Peterson’s first vintage under the Avennia label, based in Woodinville, he made the right choice in working with fruit—one of the earliest plantings of Syrah in Washington—from last year’s Vineyard of the Year, Boushey Vineyard of Yakima Valley. Peterson (who made wine at DeLille Cellars for seven years) chose to use native airborne yeasts, rather than adding yeast to the wine, and bottled the wine without fining (adding an agent to make the wine clearer) or filtering, thus preserving more of the tiny bits of grape skins and lees that will continue to add body and flavor to the wine as it ages. He feels this method of minimal manipulation also lets the signature of place shine through, and creates “wine with a voice.” We hear it singing!

White Wine of the Year
Lullaby Viognier 2010, Walla Walla Valley, $35
Winemaker Virginie Bourgue understood the concept of “wines of place” from an early age. In college, she studied viticulture and enology in Avignon in her native France, and then received her master’s degree in enology in Champagne. She made wine for Bergevin Lane and at Cadaretta in Walla Walla, and had the chance to oversee the planting of new vineyards south of town for Cadaretta, before starting her own label, Lullaby Winery. Now she works with winegrowers in the Walla Walla AVA to not only source the best fruit, but also to make sure it is grown, pruned and harvested to her specifications. The results are in: Her wines have a restrained elegance that lets the fruit and minerality shine without being too fruity or too lean. This Viognier charmed our judges for its “rounded balance” and “long finish” with notes of lemon curd and white peach—all characteristics of a well-made Walla Walla Viognier. Once a Seattle magazine Winemaker to Watch, Bourgue is now at her best. 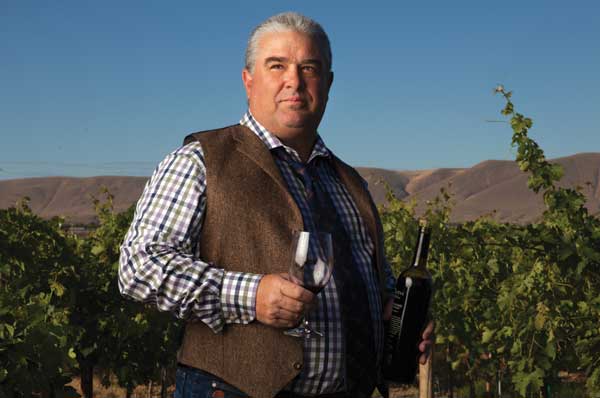 Winemaker of the Year
Charlie Hoppes of Fidelitas
Charlie Hoppes is everywhere. His Fidelitas Winery is more than 10 years old, and he’s known as a consulting winemaker for many Washington wineries. A flight test engineer at Boeing, Hoppes quit that career in his late 20s to do something more creative with his life. He attended the University of California, Davis, viticulture and enology program, and then worked as head red winemaker at Chateau Ste. Michelle from 1990 to 1999. Since 2000, he’s consulted for and helped start up numerous wineries, including Three Rivers in Walla Walla, Gamache in Prosser and Goose Ridge in Richland. He finally struck out on his own with Fidelitas on Red Mountain in 2002. Although he’d been a fan of Red Mountain since his first visit (on the day his daughter was born in 1989), he didn’t work with the fruit until 2005. He now has his own vineyard on Red Mountain, where he has planted Bordeaux varieties on about 3 acres, with 10 more in the works for 2014. In the meantime, he has access to some of the best fruit in the state, from some of his favorite Red Mountain vineyards—Ciel du Cheval and Red Mountain vineyards—and is creating red wines of distinction, such as his nuanced 100 percent Cabernet Sauvignon from Ciel du Cheval, that show his experience and commitment to excellence. 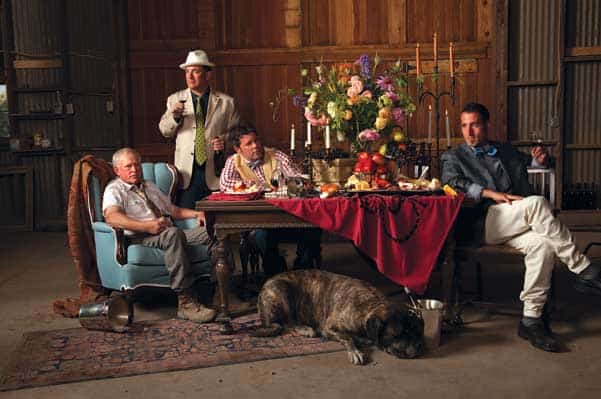 Vineyard of the Year
Red Willow
As the Yakima Valley AVA celebrates its 30th anniversary, one of the first vineyards to put Yakima on the map turns 40. In 1973, Red Willow’s Mike Sauer shifted from Concord grapes to wine grapes and—with the guidance of Washington State University viticulturist Walter Clore—planted Cabernet Sauvignon, Merlot and Syrah—and later, working with David Lake, some lesser known varieties such as Tempranillo and Nebbiolo; it’s one of the first sites to explore which grapes would grow best in Washington. Sauer and winemakers who use his grapes have discovered the unique characteristics of this vineyard. Columbia has made a Red Willow Syrah since 1980 that gets better and better, and Cavatappi’s Red Willow Nebbiolo proves that this site can grow this persnickety Italian variety and make a beautiful wine.

Winemaker to Watch
Chris Peterson, Avennia
Chris Peterson made stellar wines under the radar with Chris Upchurch of DeLille for seven years, but moved into a new venture with partner and businessman Marty Taucher. Woodinville-based Avennia sources the highest-quality fruit from winegrowers he’s built relationships with—such as Dick Boushey in Yakima Valley—to create intense, balanced red wines designed to highlight the place they were grown (including this year’s Best Red; see page 87). Peterson often lets the natural yeasts in the grape and in the air work on the wine, and also doesn’t filter the wines, retaining all the complexity and ageability the fruit holds. Its moniker inspired by the Roman name for Avignon, the French center of Old World winemaking, Avennia hopes to make Old World–style wines with a New World energy and sense of place.

Sommelier of the Year
Thomas Price at The Metropolitan Grill
Pouring wine for a living—how hard can that be? Well, people like Thomas Price, our Sommelier of the Year, and head sommelier at The Metropolitan Grill, make it look easy. But managing a wine list with 1,800 selections and a cellar of 14,000 bottles is quite a job. Pairing wines with the Met’s super-premium steak menu, Price gathers a range of whites and reds from all over the world, with local options that include 30 Washington Merlots from stellar wineries such as L’Ecole N° 41 and Woodward Canyon. But what sets him apart was his extraordinary effort in 2012 to finish his master sommelier degree from The Court of Master Sommeliers. The advanced degree consists of passing three levels of testing (which took nine years), plus a blind tasting and service exam. He regularly “trained” with other students to hone his tasting skills and detailed knowledge of wine regions, famous vineyards, winemakers and wineries. 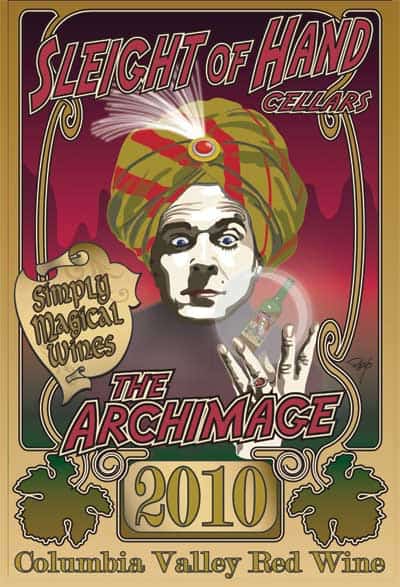 Coolest Wine Label
Sleight of Hand
For anyone who knows Walla Walla–based Sleight of Hand Cellars owner and winemaker Trey Busch, his mischievous approach to branding makes perfect sense. The winery’s name comes from a Pearl Jam song (Busch’s favorite band) titled “Sleight of Hand” about a man hoping to break free from routine. And the labels, inspired by vintage magic posters, were designed by Denver-based artist Phelyx Hopkins*, a professional magician who performs at the winery every spring. With names like “Levitation” Syrah, “The Archimage” Red Blend and “The Magician’s Assistant” Cabernet Franc Rosé, the wines are as magical as the labels—full of fruit, but balanced with just the right touch of acidity and tannins. The wines are so popular that the Sleight of Hand’s Wine Illusionist Society wine club may soon transform into a mailing list allocation system. Be sure to get a mixed case—they disappear fast. 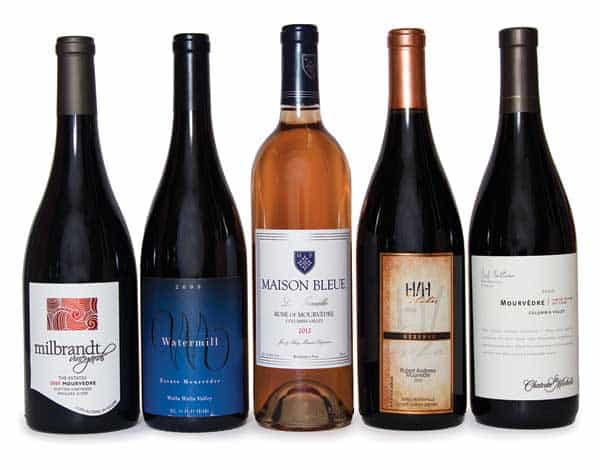 Emerging Winery
Kerloo Cellars in Walla Walla
The call of the crane gives this winery, owned by Ryan Crane, its name. Leaving a sales job in Seattle, Crane pursued his dream of owning his own winery in Walla Walla in 2006. He enrolled in the Walla Walla Community College viticulture program, and started volunteering at wineries, such as Forgeron Cellars and Trust Cellars, to learn the trade. He was hired by Justin Wylie of Va Piano Vineyards, and started to make his own wine there. This is a pretty common story in Walla Walla, but Crane has set himself apart with wines that impress for their elegance, balance and focus on varietal character—meaning he wants to make a “Tempranillo that tastes like a classic Tempranillo.” He makes wines he likes to drink, such as a cooler-climate Walla Walla Syrah that pairs well with food, rather than a “fruit cocktail.” He’s gaining access to solid Washington vineyards (Les Collines and Va Piano), and aims to create wines, mostly without blending, that represent a particular site.

2013 Emerging Varietal
Petit Verdot
Washington wine is nothing if not experimental. As with many grapes, Petit Verdot is typically used as a blending grape in the Bordeaux region of France, rather than being made into its own varietal wine. A late ripener, this grape has fallen out of favor in many countries, but local winemakers are seduced by its dark purple fruit, which can ripen in Washington’s late summers, showing aromas of dark berries, violet and deep leather. Some wineries that have successfully made PV are Alexandria Nicole, Dusted Valley, Forgeron, Gilbert Cellars, Januik and Seven Hills wineries. Check out our Special Varietal Spotlight on MOURVÈDRE.