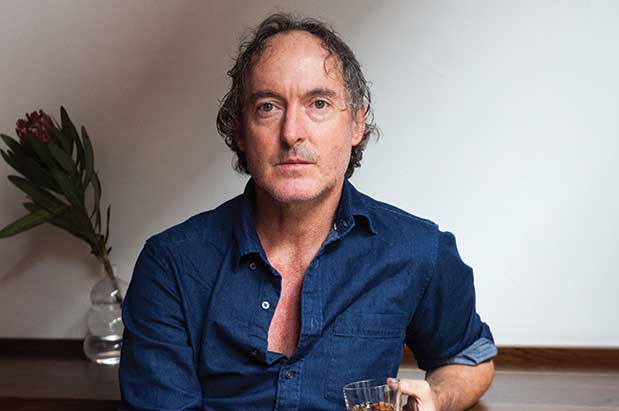 I’m going out a tipsy limb – I think we have the best bartenders in the world. Creative, convivial, courteous (mostly!), and delivering delicious cocktails, Seattle has an abundance of bartending superheroes. But where does their cocktail creativity and genius come from when they’re putting together the drinks we love? We managed to grab a few of our favorites to learn a little more about what drives these drink providers to such heights, and to find what’s behind the people behind the bars.

Convivial, continental, and charming, Jay Kuehner ran the creative bar program at Ballad’s sadly closed Sambar, and now is bar director of the new Cloud Room, a shared working space and private club above Chop House Row, as well as bartending at Damn The Weather. As if that wasn’t enough, he’s an accomplished writer of film criticism. We recently talked with him about how it all comes together in a balanced manner.

1. For a fair amount of time you did your cocktail shaking and stirring at the much missed Sambar. What do you miss most from that time?

We experimented a lot, but that creativity was hopefully in the service of the guests’ good time (i.e. talking with friends over drinks) rather than a distracting spectacle. I loved it when someone ordered an Americano, or asked to try rhum agricole, or took advantage of our Calvados selection, or some mezcal with a piece of salt-cured grapefruit and half a beer (this was at a time, not so long ago, when most of these spirits had to be suitcased in to your bar, remember?)

2. How does the Damn The Weather differ from the Sambar?

Radically different points in the spectrum, though both aspired to be “neighborhood” bars that perhaps became destinations. DTW and Sambar differ in terms of conception, from their respective owners. Both have deep culinary influences with progressive cocktail programs – the idea is that the space is a place to drink and eat well. Damn The Weather is more consciously scaled back to accommodate the “new” Pioneer Square, where rhum agricole and baseball games are no longer mutually exclusive things.

3. What drinks at Damn The Weather are your favorites to suggest to unsure customers?

Never tried that obscure ingredient in that cleverly-named cocktail? Ask to taste! (It’s made from sloe berries, of the blackthorn shrub, from Navarra, and it’s called Patxaran, for example). It is good to know the base spirit of the cocktail you’re drinking, so why not start with a pure pour of something, then graduate to adding sugar and bitters or a fortified such as vermouth. Then you can appreciate what’s in front of you for what it’s worth – and no amount of celebrity bartender or best-new-restaurant can distract you from that simple pleasure, which you will seek to repeat as you travel your city, the country, and the world at large. I’m amazed that people popularly demand Moscow Mules but never Chilcanos. And Manhattans but never Capitans.

4. For those who don’t know, you’re also a film critic. In one of your pieces you described the poetic virtues of a film as being “discreetly tucked away rather than flaunted.” Could one say that very well-balanced cocktail is also often the same? Or is that giving cocktails too much artistry?

I’ll digress though to answer your question, citing a different medium. I love architecture, and I love talking with architects, especially while they are drinking. This idea of an artistic virtue being discreet rather than flaunted is related to how we experience the work of architecture. We are rarely seduced by pragmatism until the later stages of revelation. Subtleties emerge. The grand entryway means little when faced with an enigma of a bathroom door that opens onto the toilet. Similarly, there’s a modesty, rather than grandeur, to the classics. Thus, the good cocktail speaks quietly, it does its own work, and the goal is to honor that, not fuck it up.

But yes, you’re right, it’s giving cocktails too much artistry. Think what it takes to actually build a bar!

5. Do you ever find that your film writing and knowledge influences you when you’re creating a new cocktail? And how, if so?

Two totally different forms of attention. But as with anything, the methodology is important: idea, execution, finished product, and delivery are all crucial. No room for the intellect in the making of drinks, but hopefully in the conversation with whom you are serving. For many years, while bartending at night, I worked by day for a very skilled landscape designer. Hardscaped patios, dry stacked retaining walls, native species garden installation, and lots and lots of maintenance. This served as a better reference point for design in general, which extends to cooking and making drinks: it has to be just right, or not at all.

6. Once, in an interview, you called yourself “a reluctant mixologist.” Do you still feel that way?

I said that? I suppose in context what I was suggesting was that I’m not particularly keen on mixing drinks: the stand-alone spirit to me is always better. The question “what can you do with….?” always struck me as misguided. I can pour it in a glass for you to savor!

I’m somewhat outside of the industry and don’t identify as a bartender. I do it with passion, with professionalism, and the rest takes care of itself. There are committed professionals who have endeavored to elevate the craft, and by extension the industry, and they have created a platform for people like me to work, let alone strut my stuff. But I can remember a time when the position was not so ennobled – it usually meant you weren’t going to cut it as a novelist and had to take a night job. Now there is an industry with dress codes and conventions and trade publications and sponsorships, a kind of glamour.

7. When you’re not making cocktails, but going out to drink them, where do you like to go, and what’s your regular drink?

I enjoy going to bars where I can hear my friend talking and the crowd is of the live-and-let-live sort. Campari, vermouth, cold lager, rose, mezcal (if they got it), shochu, Pisco, that kind of thing. Watching Spanish football at The Dray is my go-to, though they don’t have hard booze. Something about Maneki feels timeless to me too.

Abroad, there are too many to name. Corner bars in Mexico City, Buenos Aires, Bilbao, Lima, Havana.

On the road I love stopping into old bars to soak up not just a drink but the unique ambiance, the sense of history that seems to hang on the upholstery. Light beaming from a tired jukebox. Mint green bathroom tile with innocuous graffiti. Crooked pool cues. Always a character behind the bar. Just don’t ask what kind of ice they use…..

Up Next: Seven questions for Bryn Lumsden