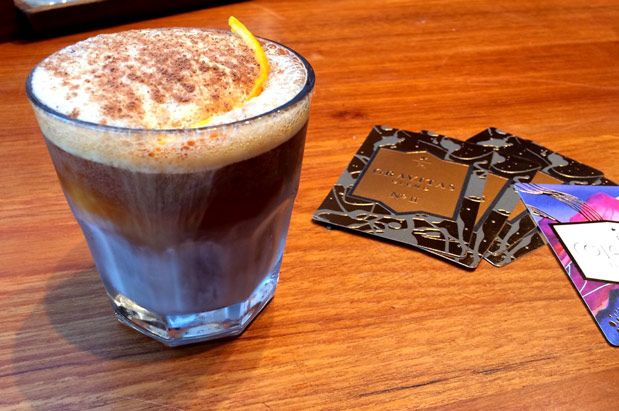 I scream. You scream. In Seattle, we all scream for coffee. But just in time for summer’s warmer temps, Starbucks is bringing us the best of both worlds with a line of coffee-based ice cream beverages. (Or are they ice cream-based coffee beverages?) The six new items—which incorporate high-quality scoops from Bainbridge Island’s Mora Ice Creamery—launch today, only at Starbucks’ swanky Roastery location at Melrose and Pike on Capitol Hill.

The menu includes deluxe versions of some of the best-loved ice cream drinks: floats and milkshakes. The Roastery’s Cold Brew Float (12 ounces; 170 calories; $9) keeps it simple—Sbux’s small-lot, single-origin cold brew poured over Mora’s locally made vanilla ice cream. Our advice? Upgrade your float by requesting the nitro-carbonated cold brew (add $1), which adds extra creaminess without additional calories. The Cold Brew Malt shake (12 ounces; 400 calories; $10)—so rich and thick, you could make a meal of it—is a nostalgic nod to old-school ice cream parlors, blending cold brew with malt and a dash of bourbon barrel-aged cocktail bitters.

Also in the lineup: Three versions of the classic European treat, affogato, which means “drowned” in Italian. In the Classic Affogato (4 ounces; 170 calories; $7.50), a scoop of Mora vanilla is drowned in two shots of Starbucks’ Paradeisi, a single-origin espresso with caramel undertones and citrus notes. The House Affogato (6 ounces; 190 calories; $8) adds a touch of demerara syrup and a dusting of cinnamon. Rounding off the trio is the Shakerato Affogato (6 ounces; 190 calories; $8), in which the Paradeisi espresso shots are shaken with ice until frothy before being poured over a scoop of Mora’s, and then finished with vanilla syrup and a sprig of mint.

Finally, the aptly named Vesuvius (9 ounces; 190 calories; $8). In our fave of the new cold coffee drinks, the house cold brew is shaken with orange peel and an orange-piloncillo (brown sugar) syrup, then strained over the ice cream and garnished with a dusting of mocha and an orange peel twist. Watch as the ice cream erupts to the surface shortly after the coffee is poured over!