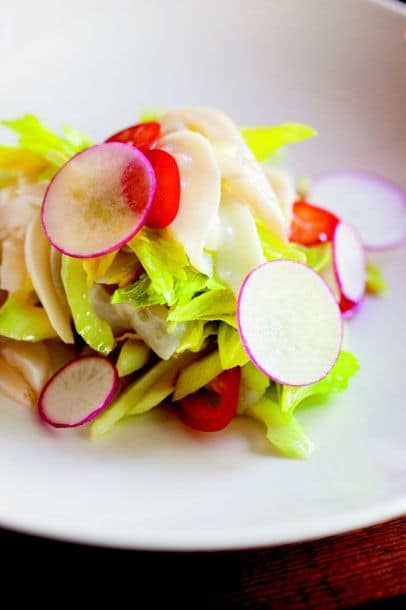 Ever since a recent visit to the Modernist Cuisine Lab, I cannot stop thinking about geoduck. Yes, I’ve got a giant clam on the brain.

The Modernist Cuisine Lab is one slice of the pie that’s known as Intellectual Ventures, the sprawling science playground in an anonymous looking building in Bellevue. I was recently invited by Oyster Bill Whitbeck to tag along on a private tour for some folks from Taylor Shellfish, who brought along some oysters, naturally. But also a couple of geoduck.

Oyster Bill first got to know the chefs who co-authored the publishing sensation with Nathan Myhrvold several years ago when they would show up at the U-District Farmers Market and go hog wild purchasing those clams. He’s made many visits to the now-famous Modernist Cuisine Cooking Lab, even sharing a supper with the likes of the French Laundry’s Thomas Keller in advance of the book hitting the market.

So, here we were, getting a tour of this place filled with lasers that can cut through granite like it’s butter and 3-D printing machines and another laser designed to zap the wings off female mosquitoes. The big brains laboring at this operation just blows my mind.

When we finish up the tour with time in the kitchen area, there’s a sense of relief. Finally, something I feel comfortable talking about. 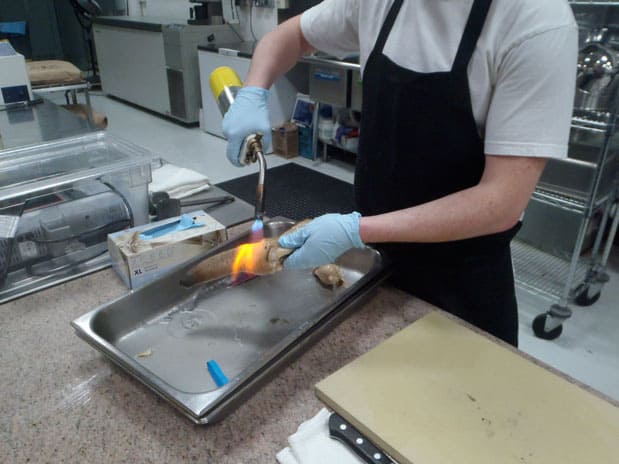 And then, one of the chefs fires up a blowtorch! He’s searing the siphon of the geoduck, to make it easy to pull off the membrane without blanching the clam in boiling water.

Shortly after that daring demo, we’re served a bowl of vongole, only there is no pasta. The geoduck stands in for the noodles in this classic Italian dish and oh my. It’s so tender, so succulent. There are no words spoken, only quiet murmurs of wonder and joy.

How do they do it? Can I do it at home? Yes, but it’s not likely to taste as magnificent as this bowl of giant clam perfection.

A few days later, I’m still dreaming about it, so I asked Oyster Bill: What Seattle restaurants are serving geoduck these days? He sent me a list, and it’s mostly sushi places such as Sushi Kappo Tamura.

I while I do appreciate and admire the crunch of geoduck sashimi, but I wanted something more elaborate.

One reason that clam is probably not a bigger star on menus is that the price has gone way up as the supplies have dwindled. It’s now retailing for $30 a pound, as much of the harvest heads to Asia.

But wait. There’s one Seattle chef who’s been on the geoduck bandwagon for years. Ethan Stowell made quite a splash serving a geoduck crudo when Anchovies & Olives opened in 2009. Love that stuff!

Oh, and guess what? He’s doing a demo Monday night at Book Larder, with author Jess Thomson (who wrote the quick-and-easy recipes for our January Noodle issue, on newsstands now!), showcasing recipes from her Dishing Up Washington cookbook. Maybe he’ll even talk about geoduck. Because that’s one of the recipes featured in the book.

True to Seattle chef and restaurateur Ethan Stowell’s style, this gorgeous appetizer is almost painfully simple, relying on bright, fresh flavors and perfect ingredients instead of complicated cooking techniques. Geoduck clams, also known as king clams, are a bit intimidating with their giant, meaty siphons—ask your fishmonger how to clean them.

2 jalapeños, seeded and diced as small as possible

Mix the clam, celery, lime juice, jalapenos, radishes, chives, and oil together in a bowl, and salt and pepper to taste. Let marinate for about 5 minutes, then and arrange the clam mixture on a plate and serve immediately.

Excerpted from Dishing Up® Washington © Jess Thomson. Used with permission of Storey Publishing.